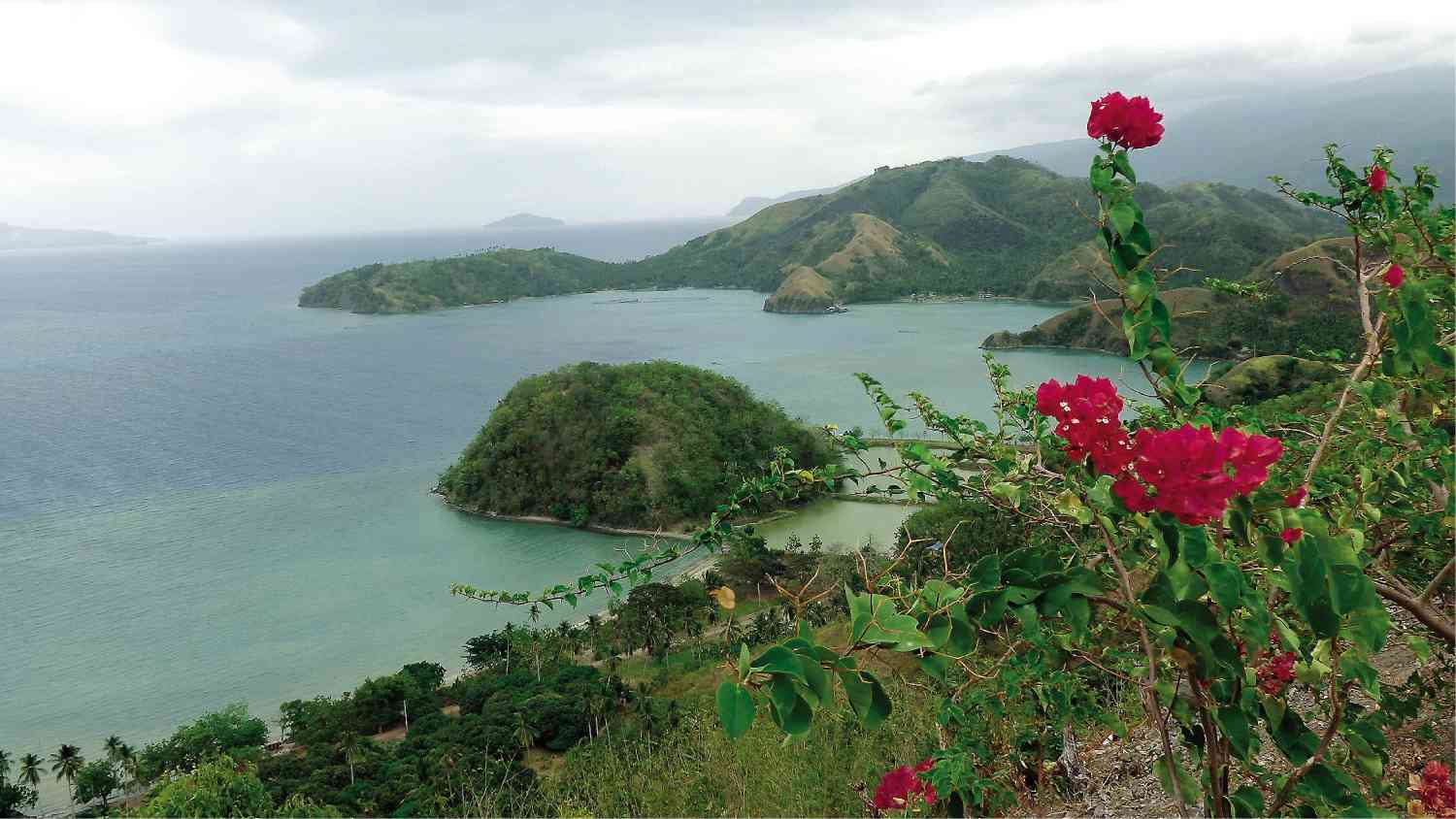 LAZY GIANT From a cliff one can view “Sleeping Dinosaur Island,” so called for its shape from this angle, in Mati City, Davao Oriental. FRINSTON LIM/INQUIRER MINDANAO

From end to end, Davao Oriental is teeming with postcard-pretty sites and sights, many of which are still waiting to be discovered, explored and experienced.

At 516,400 hectares, Davao Oriental is the largest province in Southern Mindanao, comprising about 20 percent of the region’s land area. Its 513.2-kilometer coastline is one of the longest and has the most beautiful beaches in the country.

Due to its sheer size and plethora of interesting sights, Davao Oriental is best experienced through a two-day road trip. Its almost 200-km highway infrastructure is an excellent road network that leads visitors straight to tourist destinations in the province.

Tourists may take regular or air-conditioned buses from Davao City to Banay-Banay town. At the welcome arch in Pintatagan village, a souvenir and gift center is perched on the foot of the cliff at the left side of the Pan-Philippine Highway. Products made in Davao Oriental are sold there. Several kilometers up, beach resorts facing the Davao Gulf dot the right side of the highway.

One hour from Banay-Banay, upon reaching the village of Manikling in San Isidro town, tourists may swing right to the national road leading to the Mount Hamiguitan range, a 1,234-ha site protected because of its bonsai forest and rich biodiversity.

From Hamiguitan, tourists may take Davao City-bound buses or jeepneys back to Manikling Junction. There they can take Mati-bound buses and jeepneys for the next stop.

Below the winding roads of Badas village in Mati lies the picturesque island aptly known as the “Sleeping Dinosaur,” as it resembles the prehistoric reptile resting on its side on the blue waters of Pujada Bay.

Brightly painted view decks offer panoramic vistas of the unusual land formation several hundreds of meters below, and one’s visit to Davao Oriental is incomplete without a selfie or groupie with the “slumbering leviathan” in the background.

Then visitors can motor to the provincial capital, some 20 km away, enjoying the ride with mountain views on one side and views of the sea and islands on the other.

The capital city of about 100,000 is a microcosm of the entire province as far as tourism is concerned. Here, visitors can take a dip or indulge in surfing or skim-boarding off the beaches of Dahican, just 15 minutes and P40 from the city proper.

Also in Mati, tourists are treated to the rich heritage and culture of the province’s inhabitants—the Mandayas, Mansakas and Islamized natives called Kalagans, as well as its pioneers—through Subangan Museum, the repository of everything about Davao Oriental.

For an entrance fee of P50 for non-Davao Oriental visitors and P100 for foreigners, visitors get the chance to see and (again!) take pictures with DavOr, a 16-meter sperm whale that got beached in GovGen and whose skeleton is displayed at the museum’s lobby. The behemoth is the seventh largest remains of a marine mammal on exhibit worldwide, according to museum personnel.

The next stop is the Carmelite church complex in the village of Matiao, a pedicab ride away from Subangan Museum. The sprawling complex of hanging bridges and a kilometer-long Way of the Cross with life-size figures is a must-visit for the pious and the curious. The serenity of the place, with its lush hills, is ideal for meditation, although the complex is also a favorite for joggers and trekkers.

Before calling it a day, visitors can try the Baywalk, a long promenade facing the sea in downtown Mati and experience the sights, sounds and tastes of the capital.

From Mati, tourists travel for two hours by bus up north along the Mati-Surigao highway for the first stop on Day 2: the scenic and historic town of Caraga.

At Santiago village, visitors take a detour to the right for Pusan Point, some 9-plus km from the main highway. For P50 per person, motorcycle drivers can take them to Pusan Point, where the Philippines’ day begins, and there they can watch powerful Pacific waves pounding the rugged cliffs on the coast.

Ideally, tourists could leave Mati on the first day, spend the night in Caraga’s affordable inns so they could head to Pusan Point early in the morning to see the first rays of the sun hit the country’s easternmost part.

After Pusan Point, the next stop is Poblacion village. Here, visitors can take pictures or pray inside Mindanao’s oldest standing stone church.

Built in 1884 by Spanish friars, the San Salvador del Mundo Church boasts of centuries-old seashell water fonts. The church has been declared a national historical site by the government.

The church suffered only minimal damage when Typhoon “Pablo” (international name: Bopha) struck Davao Oriental and many parts of Southern Mindanao in 2012.

About 45 minutes from Caraga is Sunrise Boulevard in the eastern coastal town of Baganga. Pink benches, kiosks, and a mini park for children, among other structures, have transformed the long stretch of the national highway facing the Pacific Ocean into a park.

The area has become a favorite destination for travelers who want a dip in the ocean or take selfies and groupies, a far cry from what it was once: an open, treeless urinal.

With more than 130 cataracts, Aliwagwag Falls, in Aliwagwag village, is considered one of the most beautiful waterfalls in Mindanao and among the highest in the country.

The area around the waterfalls is being developed by the provincial government, with the construction of hanging bridges, picnic kiosks, benches and a 500-m-long zipline on the other side of Aliwagwag Bridge.

As the area is situated along the national highway, buses bound for Davao City and Compostela Valley province pass by Aliwagwag.

As they head back to Mati, visitors may opt to drop by Balete Hot Springs in Kinablangan village in Baganga for a quick, relaxing dip in the steamy, flowing waters. It will cost them only P5.