The war in Mindanao, through the eyes of Jun de Leon | Inquirer Lifestyle ❮ ❯ The war in Mindanao, through the eyes of Jun de Leon 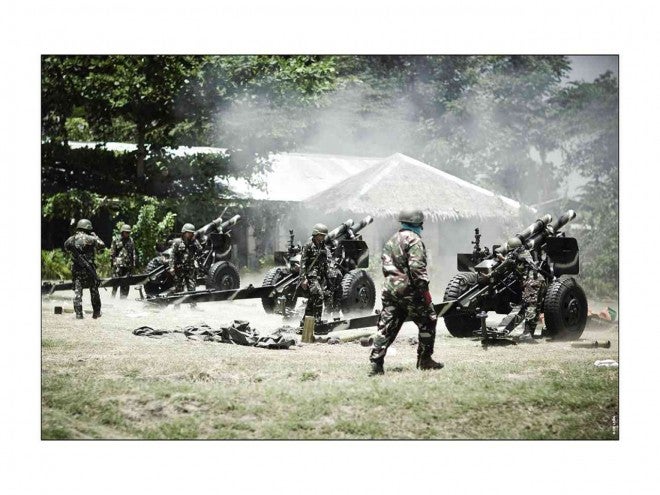 Photographer Jun de Leon calls her “my Madonna”: a portrait of a young refugee mother holding her baby in one of the evacuation camps in Cotabato, eyes hollow with hunger and the horror of war.

When a Philippine Army major, a battle-hardened field commander, was shown the photograph, his eyes filled with tears.

“He said, ‘I live here, why don’t I see this?’” recalls De Leon. “That’s the magic of photography. It’s the truth—minus some honesty, because I composed it.”

Taken over a harrowing seven days in Cotabato, in mid-March, at the height of the Armed Forces of the Philippines’ pursuit operations against the Bangsamoro Islamic Freedom Fighters, De Leon’s photographs brim with what Bruce Lee called “emotional content,” that current of energy that carries meaning from the photographer’s eye, through his heart, to another human being who is willing to see through his lens. 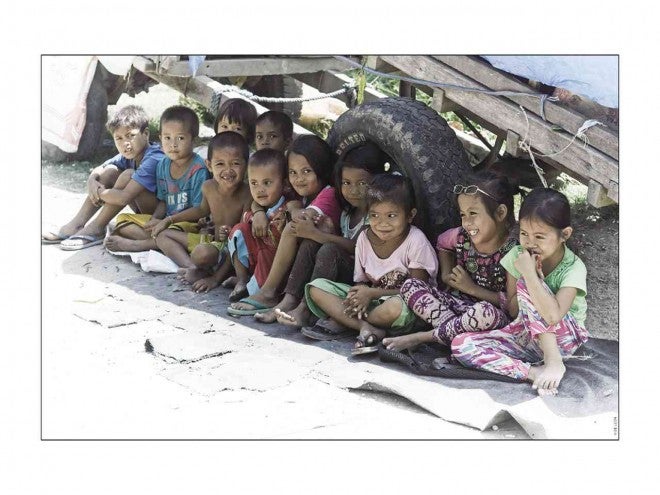 “I don’t consider photography an art,” De Leon says. “For me it is a language. I think in pictures. I speak in pictures. I listen to someone talking and a picture forms in my mind. I’m very poor with words. That’s always been my weakness.”

Nevertheless, he managed to compose a fairly eloquent statement of purpose for “Children At the Crossroads,” an exhibit of his photographs, with a short film by his son Tim de Leon and stories by An Mercado Alcantara, which opens at SM Aura on April 24 at 6 p.m.

“I entered with just my cameras and a burning desire to understand, conscious of only one thing: War is obscene. I expected to find anger, sadness, arms stretched out begging for alms. Instead, I discovered resiliency and strength of spirit, and quiet hope. And in the children, I found a beauty of soul that nothing can destroy, unsullied even by the ravages of war.”

Is this the same Jun de Leon, legendary fashion and glamour photographer, famous for his portraits of celebrities and the beau monde? The hard-partying bad boy of photography who, urban legend has it, once threw a camera at a particularly incompetent model in a fit of temper?

People forget that he started out as a photojournalist of the Daily Express, when he was still a long-haired fine arts student at the University of Santo Tomas. 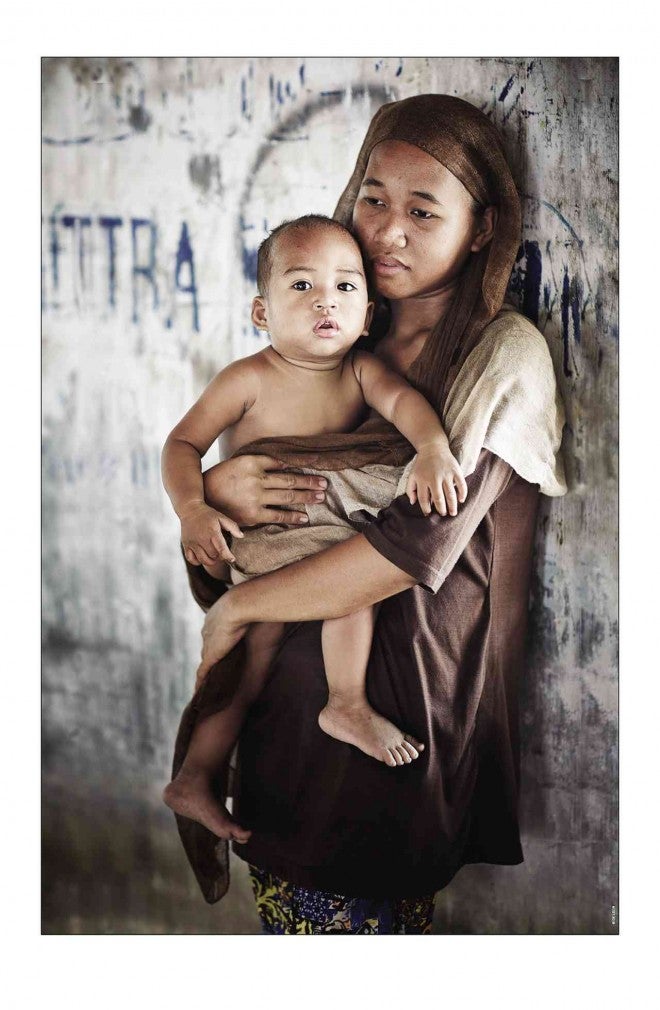 “I was always the first to volunteer for assignments that the other photographers didn’t want,” he recalls.

Among other subjects, De Leon covered the discovery of Hiroo Onoda, the last Japanese straggler who emerged from Lubang Island in 1974, and the surrender of Nur Misuari after the Moro National Liberation Front rebellion.

“That’s how I learned timing, and tempo,” he says. “Even in glamour photography, you have to find the rhythm. There’s a symbiotic relationship between the subject, me and my camera. That’s why the stars love me.”

After nine years with the Daily Express, he chose to go freelance. De Leon hasn’t looked back since.

“I’ve been in the business for 42 years. I have 16 books to my name. But I’m not my biggest fan. The truth is, my work doesn’t overwhelm me. I have no special talent. I just love photography. I love the process. I love the shooting. I’m excited to go to work. But at the end of the day, I’m happy to go home.”

De Leon has mellowed considerably since what previous profiles of him considered his “sex, drugs and rock ’n’ roll” days.

He quit a two-packs-a-day habit three years ago, and has become something of a fitness buff, taking up wakeboarding, working out in a gym with a trainer three times a week, and logging 10,000 steps a day on his pedometer.

He hopes to compete in his first triathlon in the near future. 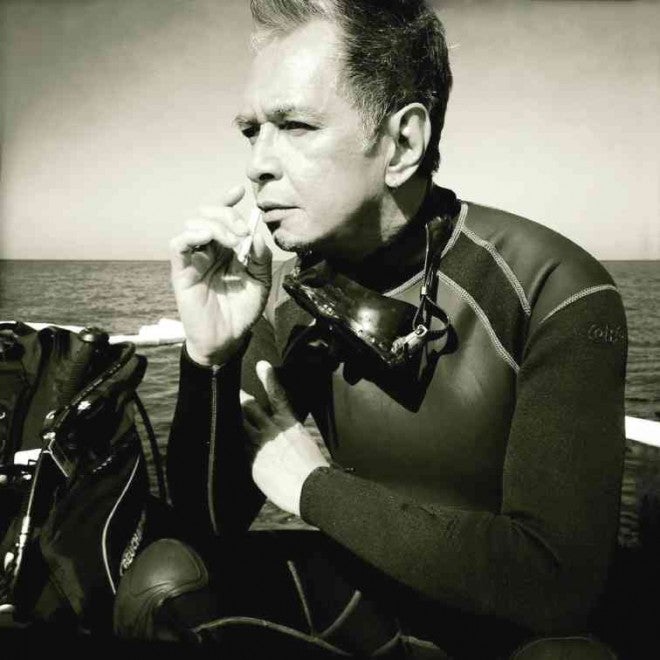 These days, his main preoccupation is being a good father to his eight children, the youngest of whom is only 13.

But despite a successful career and a happy home life, something of the young upstart eager to prove himself still remains after 42 years, and when the invitation to photograph the war in Mindanao presented itself, De Leon jumped at the chance, despite his family’s strenuous objections.

“After Mamasapano, I was confused,” he recalls. “Why is there so much anger? Why so much restlessness? The only thing I knew was, I don’t want war.”

De Leon wanted answers, and the only way he knew how to get them was to go to the front line and take pictures. But first, as a responsible padre de familia, he took out a life insurance policy for P6 million, just in case.

“If I don’t come back,” he told his wife, “cry one whole day and go shopping the next.”

His son insisted he also wear a Kevlar vest, but De Leon wanted to take just a few simple cameras with him, to be limber, mobile, ready to press the shutter when the picture presented itself. The thought of going to war got his photojournalist’s blood pumping again.

With writer Alcantara and his son, filmmaker Tim de Leon, De Leon was able to gain entry into the 45th Infantry Battalion camps, the evacuation centers, and even Camp Abubakar and Camp Afghan, the largest Moro Islamic Liberation Front camp in Mindanao.

“I had no political agenda whatsoever,” he says. “I had questions. I wanted answers.”

As always, the answers came in images, some captured in his camera, others only in his mind, but they all stayed with him.

There’s the face of the lone survivor of a fierce firefight, an Army lieutenant, holding a picture of his family and hoping he could be home in time to pin three medals on the chest of his daughter, who was graduating that March.

There’s a father in a refugee camp dividing a meager portion of rice and a single banana into four portions, for his four children—leaving none for himself.

There’s a crater in the ground left by a mortar shell where, just the day before, he was standing.

There was the young officer asking him to take a group photo of his platoon, “habang buo pa kami.”

There’s a battery of Howitzers responding to a call for artillery cover with a deafening blaze of cannon fire. “Cost per round? P35,000. Versus one banana divided into four. You do the math,” he says. 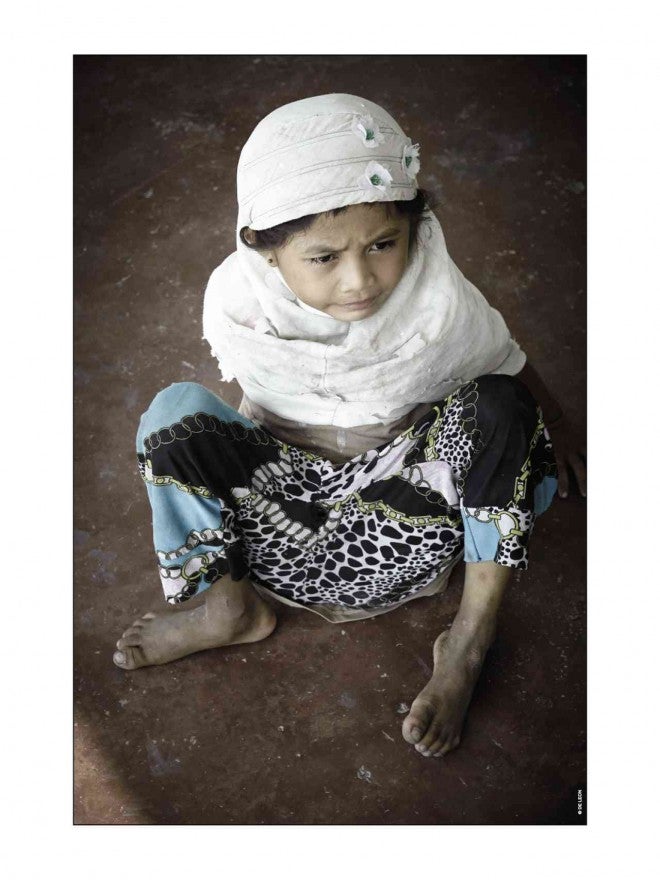 And, finally, the voice of Norombai Utto, the valedictorian of the school in Mamasapano, wishing every day was graduation day, because then there would be no fighting, and no one dying.

After seven days, De Leon came home with more than a thousand photographs, which have been edited down to 46 for the exhibit.

“I experienced a healing,” he says. “I hugged my son when I got home. There’s always an emotional response to what you photograph. It will come out, but you cannot say when.”

Hopefully, viewers of the exhibit can feel something of what De Leon felt when they see the images.

“I don’t have an agenda,” he says. “I’m not propeace or prowar. I just want people to think. Just think, before they say anything, or press that keyboard.

“In the end, photography is about passion and precision,” he concludes. “Hindi pwedeng puro passion, you also have to be precise. But what is life without passion?”

De Leon believes, as William Blake said, that he who binds himself to a joy, does the winged life destroy. Nonattachment has been his mantra since the early days.

When he decided to embrace digital technology, he sold off all his analog equipment in one fell swoop, including his first camera—a Pentax Spotmatic F that his mother bought second-hand for him when he was still a student. Early on in his career, he would burn all his negatives at the end of each year.

“After this interview, that’s the end of my emotional attachment to this project,” he says.

And it’s on to the next passion project.