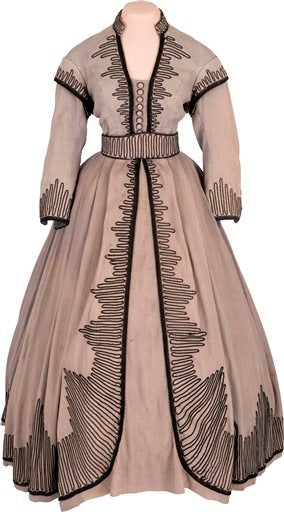 This undated photo courtesy of Heritage Auctions and HA.com shows an outfit worn in several scenes of the 1939 film “Gone With the Wind” by Vivien Leigh as she played Scarlett O’Hara. AP

DALLAS— An outfit Vivien Leigh wore when she played Scarlett O’Hara in the 1939 film “Gone With the Wind” has fetched $137,000 at auction.

Heritage Auctions offered the gray jacket and skirt, featuring a black zigzag applique, plus other items from the Academy Award-winning film at auction Saturday in Beverly Hills, California.

Dallas-based Heritage said more than 150 items from the movie, including costumes and props, were offered by James Tumblin. He formerly was in charge of the hair and makeup department at Universal Studios.

Tumblin began collecting items associated with the MGM film in the 1960s. He paid $20 for the Scarlett O’Hara outfit after spotting it at a costume company.