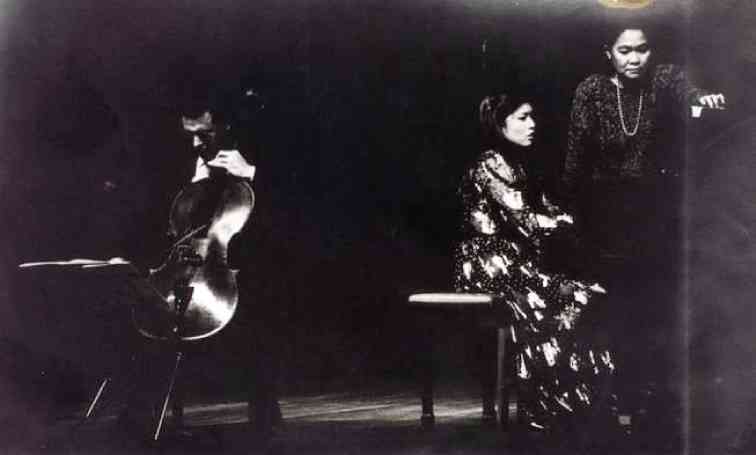 The exciting news is that the Manila Symphony Orchestra (MSO) will perform on April 25 at Hill Station of  Casa Vallejo, the over-100-year-old restored heritage building on Upper Session Road, Baguio City.

The late MSO conductor Herbert Zipper wanted to transform Baguio City into another Salzburg in the 1940s.

The romance of violinist-conductor Basilio Manalo and his  wife, Cecilia Mapa from Bacolod,  started in the summer capital.

When Manalo was still in his teens, he would often go up to Baguio where a neighbor, Cecilia, would hear him play Abelardo’s “Cavatina” accompanied by his maternal grandmother, Leonor Mur (a piano graduate of Liceo de Barcelona).

The late Mrs. Manalo confided to me,  “I’d often see Billy [Manalo] in those Baguio tea musicals, but I also saw him quite often in the MSO concerts where he was in the first violin section. The pieces that stay in my  mind to this day is Abelardo’s ‘Cavatina’ and Rossini’s ‘Barber of Seville’ [transcribed for the violin]. After his Juilliard studies, where he played the Brahms concerto with the MSO at the Rizal Memorial Coliseum under Dr. Zipper, we got married.”

The first concert I watched and covered in Baguio  was that of Russian violinist Vladimir Spivakov in the late 1970s.

Amid the cold night air and the scent of pine trees all over the Baguio Convention Center, the violin recital was pure heaven. A baby cried in the second movement of a Beethoven sonata but the audience remained quiet.

I also covered the piano recital of Tchaikovsky laureate Rowena Arrieta at St. Louis University in the early 1980s. She was given a standing ovation after her Polonaise in A Flat Major by Chopin.

Some of those who greeted Arrieta were Filipino grandmaster Eugene Torre and Amelia de la Rama, former wife of Indonesian President Sukarno.

On Christmas 1986, it was the turn of pianist Cecile Licad and Brazilian Tchaikovsky gold medalist Antonio Meneses to perform in the same venue. He was using a cello loaned by Pablo Casals, no less.

Again, the duo was greeted with a standing ovation. But what most music-lovers didn’t know was that we had a piano problem after the Cultural Center of the Philippines (CCP) refused to loan its baby grand for the outreach concert. It was a house policy that no grand piano must leave the CCP premises.

When Licad saw the piano she was to use, she talked of changing the program as she didn’t think the instrument could cope with it.

The pianist told me: “Pablo, that’s not even a baby grand. It’s a grand fetus.”

When Licad returned in 2004, this time in a theater owned by Manor Hotel, we brought our own piano and  piano-tuner all the way from Manila.

When the late filmmaker Marilou Diaz-Abaya found out it was a one-man production, she volunteered to be my stage assistant, and music-lovers were aghast to see an award-winning filmmaker doing backstage chores as production assistant.

Just before the big earthquake, I brought a Chopin Competition prizewinner to the Dap-ayan Hall.

Baguio residents will have another taste of highland concert in an event billed as “Classics at the Hill,” featuring the MSO under conductor Arturo Molina on April 25, with a   mixed program called “Bach versus Beatles.”

MSO will also hold a 10 a.m. matinee of “Soundtracks and Symphonies” on the same Saturday at the MES courtyard for Catholic religious, staff of retreat houses, and University of Baguio Conservatory of Music students and teachers. A master class will follow the matinee.