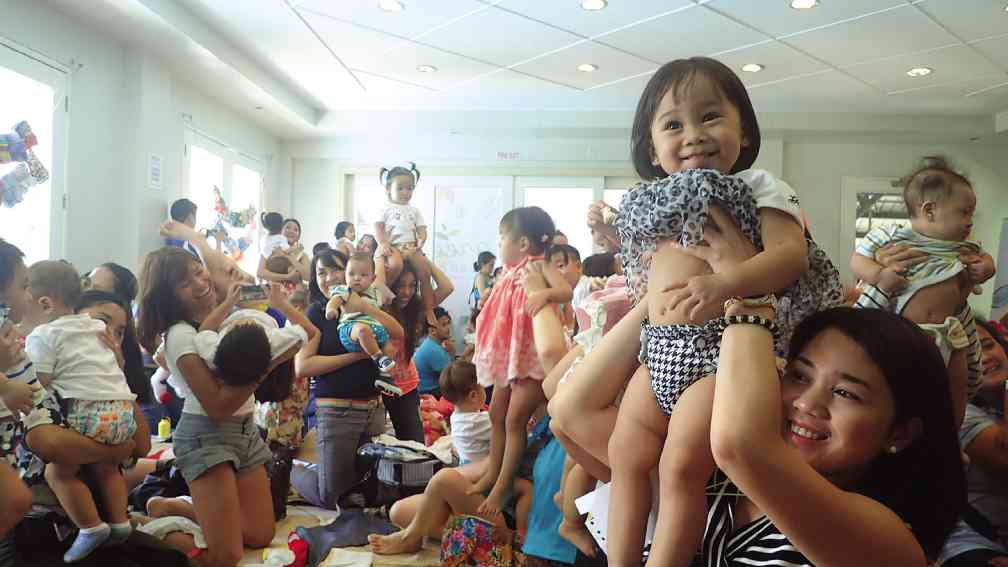 CLOTH DIAPERS CLUB Parents and guardians belonging to Modern Cloth Nappying Pinays, an online community, raise their babies as soon as they finish changing their diapers during a worldwide event aimed at spreading awareness about cloth diapers. NASTASHA VERAYO

Cause of cloth diapers use binds mothers

MANILA, Philippines–As about a hundred parents and guardians found spots on the mat-covered floor of Montgomery Place Clubhouse in New Manila, Quezon City, the air was filled with children’s chatter, cries, squeals and laughter. Chaos? Yes, but there was also a palpable sense of community.

Mothers were comfortable with each other’s company. Some were breast-feeding openly while chatting, waiting for the start of the Great Cloth Diaper Change (GCDC) record-breaking event.

The familiarity must be due to the fact that most belong to the same online support group for mothers who use cloth diapers for their babies.

The Modern Cloth Nappying Pinays (MCNP) was created four years ago by Australia-based Cheche Visitacion. “I started MCNP when I was pregnant with my daughter Zoe,” she said.

“At the time, I started researching about cloth nappies,” Visitacion said. “I was surprised at the dearth of information available to Filipino women regarding cloth nappies, considering that it was already gaining momentum in the United States and Australia.”

She created a community on Facebook patterned after a similar one in Australia, which already had about 10,000 followers.

“It’s sort of a support group for parents who want to know more about using cloth diapers, as well as a place where mothers can gift or sell new or used modern cloth nappies (MCNs),” Visitacion said. “But we want the community to be very personal, so we discourage big sellers from using the community as a platform to market their goods.”

“MCNP now has more than 17,000 members, and we’ve been exploring various ways to spread awareness about cloth diapers such as this event.”

The Great Cloth Diaper Change is an annual worldwide event that aims to spread awareness about the benefits of cloth diapering, said lawyer Tina de Guzman, president and CEO of The Fluffyness Project Corp., makers of Fluffy Pwets cloth diapers.

The movement began in the United States in 2011 as an event organized by the Real Diaper Association to promote the use of cloth diapers by trying to set and eventually break the Guinness record of most babies changed at exactly the same time.

This is the third year the Philippines has participated in the international record-breaking event. The first attempt did not qualify, but the second last year established the official Guinness World Record for that category.

“Last year, I was only a participant and booth exhibitor,” said De Guzman, who is also a member of MCNP. “This year, with the leading position of Fluffy Pwets in the cloth diaper market, we partnered with the biggest cloth diaper online community in the Philippines to bring the event to fruition.”

For the first time since it was established five years ago, the GCDC didn’t aim to officially break the world record, after Guinness decided recently to impose changes in the requirements.

“We were notified only two weeks ago about the additional requirement of a video,” Visitacion said. “We were initially planning on only having the parents and guardians sign waivers.”

Their counterparts in the United States, though, did not want to take any chances.

“Even if the video will be a wide shot, it might still show their kids’ privates,” Visitacion said. That didn’t sit well with the other parents.

“So, we’re now forgoing officially breaking the Guinness World Record and will only aim to break our own record every year,” Visitacion said.

Last year, there was a total of 8,459 babies changed across 18 countries and 6 continents. The Philippines was among the Top 10 participating countries with 88 babies changed in a single event.

This year, the total tally was 92. The accumulated count would come after a day or two, Visitacion said.

Much like the “lampin” (traditional cloth diaper), MCNs are washable and reusable, but with the added trait of being water-resistant, if not waterproof.

De Guzman, who has created her own brand of MCNs out of necessity, explained that lampin was best only for newborns. “It is very easy to dry and can hold the little output that newborns make.”

“However, once babies turn 2 months, they are able to nurse more and hold more pee, which a lampin will no longer be able to hold without leaking,” De Guzman said.

She added: “Trust me, hubby and I had had our share of soiled shirts.”

“MCNs can be washed and reused, so it eliminates the need to keep buying disposables,” Visitacion said. “While it is true that the initial investment is quite pricey versus disposables, the fact that you can keep the initial set until the child is potty-trained (average of 4 years) and even use it for the next child or sell it makes it the practical choice.”

“MCNs do not have chemicals that can harm babies and do not contribute to landfills,” she added.

Also known as hybrid fitted diapers, MCNs are hypoallergenic and breathable, and are made from cotton and organic bamboo instead of polyurethane laminate.

De Guzman also said babies were very comfortable using MCNs. In fact, she said, some friends had told her that their children reacted violently whenever they were made to wear disposable diapers while traveling and had run out of clean cloth diapers.

“The younger ones don’t know much except that they feel comfortable in (MCNs) and are able to sleep through the night without needing a nappy change,” De Guzman said. “The older ones, like my boy, Andre, who can already speak and say what they want, already have opinions on designs. My boy loves anything with robots and safari animals.”

Cloth diapers come in various colors and patterns, as well as different materials that “make the diapers leak-proof, hypoallergenic and stay dry.”