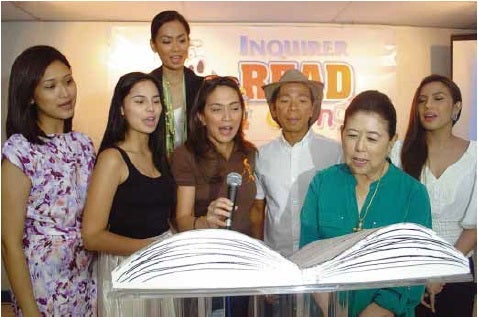 MANILA, Philippines–To mark its 8th anniversary, the Inquirer Read-Along program will name its new batch of read-along ambassadors on May 13.

Launched in May 2007, the read-along aims to promote love of reading among children aged 7 to 13 through storytelling sessions with celebrities and professional storytellers. To date, more than 18,000 children have participated in over 300 read-along sessions held in more than 50 cities nationwide.

First launched in 2013, the read-along ambassadors program aims to tap celebrities to be good role models and credible youth influencers who would promote reading among the youth through their participation in read-along sessions.

The ambassadors’ oath: To share in the advocacy to promote love of reading and in the belief that reading is at the core of learning.

The rest of the oath goes: “I promise to embody all the values of the read-along and be a good steward of the program, to unselfishly offer my time to promote love of reading, to be a good role model for the youth, and to fulfill all my responsibilities as read-along ambassador to the best of my capabilities.”

Apart from participating in read-along sessions, the ambassadors were also readers during the 2013 and 2014 Inquirer Read-Along Festivals held at the Cultural Center of the Philippines.