What it’s like to be Ed Sheeran | Lifestyle.INQ ❮ ❯ 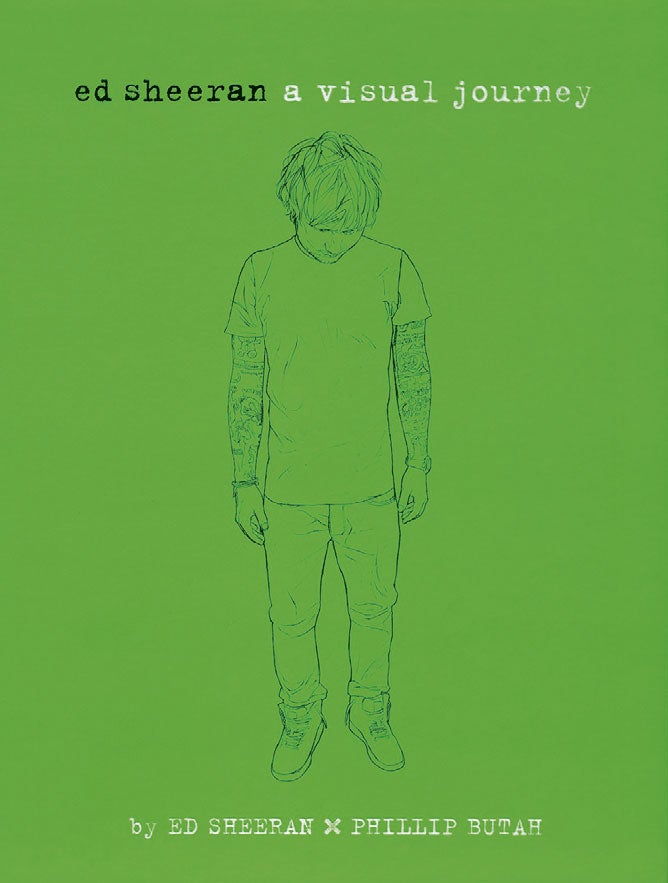 What  comes to mind when you say Ed Sheeran? As a singer-songwriter, he’s intelligent, quirky, cool—and ginger.

Those same adjectives can be applied to “Ed Sheeran: A Visual Journey,” the autobiographical collaboration between Sheeran himself and his longtime friend, visual artist Phillip Butah, published by Running Press.

But maybe not ginger; the book is more bright green.

Despite Sheeran’s admission that he didn’t want to do an autobiography because he’s still too young (that’s for folks like Mick Jagger, he says), it’s essentially what his book is, though lavishly illustrated by his images at various stages in his life. The hardcover also contains a selection of photographs that gives the book a flashy scrapbook feel.

Alongside Butah’s art, it is Sheeran’s own writing that makes “A Visual Journey” pop. This is his musical odyssey—beginning from his youth; when he first fell in love; catching Eric Clapton play “Layla” and being inspired to buy his first electric guitar for £30; and how listening to different artists became his “musical education.”

The book goes on to discuss how Sheeran was never happy in school (he dropped out) and fought hard to get his musical career off the ground. At first he reveled in being able to concentrate on his songwriting: “I was broke, but I was really happy.”

It may sound crazy now, but not only was Sheeran turned down by basically everybody he approached at the start, but even modest successes were followed by more disappointment as he pursued his craft and career in London and Los Angeles and back again. He even thought about quitting in 2010.

He didn’t, and the rest is contemporary pop music history. This part of the Ed Sheeran story is more familiar, but readers will still get access to a load of behind-the-scenes tidbits, such as how he came to tour with Taylor Swift, and how—yikes—music execs wanted to turn “Lego House” into techno.

But “A Visual Journey” also allows readers a glimpse into Sheeran’s creative process and philosophy in life, including bits like, “So, always finish your bad songs, and learn from your bad shows.”

Like his songs, the prose portions by Sheeran feel remarkably intimate and distinctive; it really does sound like he’s sitting in the bean bag next to you and just dishing on life and love. You can almost hear him plucking strings and singing refrains when you flip the pages. The only thing really missing from “A Visual Journey” is a selection of Sheeran’s lyrics.

Because the book is a project very much in the collaborative mood that Sheeran treasures, its end portion actually features Butah talking about his own artistic process, complete with examples of his other works.

Aside from being an essential item of any Sheeran fan’s collection, “Ed Sheeran: A Visual Journey” is a heartfelt, pleasingly visual and extremely thoughtful exploration of two artists’ lives and how they lead to great art.

It’s a book about being Ed Sheeran, full of big ideas and lovely lines, and how the world looks like through his eyes and music.

“I’ve been a singer-songwriter right from the word ‘go.’ I’ve worked hard to focus my sound and style to a point where it was just me being me, and not striving to be anyone else,” he writes in the introduction. “I’ve never tried to be something I’m not.”