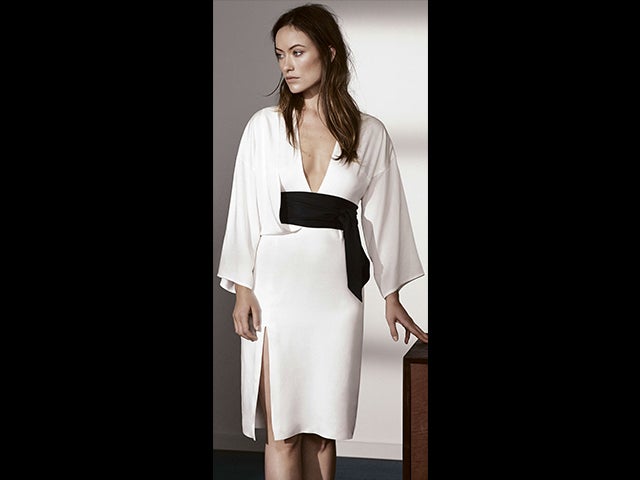 ACTRESS and humanitarian Olivia Wilde, wearing the Jamila dress, is the face of H&M Conscious Exclusive. (Photo courtesy of H&M)

HERE’S how you can shop for more clothes without the guilt: At H&M you can donate your old clothes (any brand) and get a 15-percent discount voucher for your next purchase.

This is the global initiative of H&M to lessen the fashion industry’s negative impact on the environment. Since its launch in the Philippines last December, H&M Philippines has already collected 2.3 tons of donated garments.

Fredrik Famm, H&M country manager for Southeast Asia, talked about it again as the brand launched H&M’s 21-piece Conscious Exclusive collection last week, a once-a-year initiative that aims to prove that affordable fashion and sustainability can go hand in hand. The items are priced from P899 to P13,990.

The 2015 H&M Conscious Exclusive collection has been expanded, using not just organic and recycled fabrics, but also recycled beads and sequins, and is now available exclusively in the brand’s flagship store at SM Mega Fashion Hall. (They carry a green hangtag.)

While the sustainability efforts of a fashion brand with a massive reach like H&M have been lauded, still there are critics who say that the business model of fast-fashion is ultimately contradictory to the endeavors against waste and excess. H&M, for instance, manufactures an estimated 600 million products a year.

“Critics think that because we’re selling clothes for a lower price point, we can’t be sustainable. It’s absolutely wrong,” Famm said. “We are the leaders when it comes to sustainability in the fashion industry. We don’t have factories of our own; our garments are produced in factories, which also produce other brands, sometimes brands that are clearly more expensive than we are. Instead, what you need to do is to look at what we’re doing in terms of sustainability. What kind of initiatives do we have?”

H&M’s garment-collecting initiative encourages customers to bring in old, used and even damaged clothes and garments, in exchange for store discount vouchers.

“We are closing the loop,” Famm said. “We believe in creating a circular economy when it comes to producing and using new garments. Hand in used or unwanted garments and textiles and get a 15-percent discount voucher for your next purchase.”

(Just fill a paper bag with old clothing—no minimum number of pieces, but donating more is encouraged—and bring to any H&M store. No matter how many bags of garments a customer brings, one can only get a maximum of two vouchers in a day. Typically, it’s one bag equals one voucher.)

H&M works with a company called I:Collect or I:CO, which collects and recycles discarded clothing and other garments into usable items, like cleaning cloths, car seat fillers, among others. Famm said other usable clothing may also be sold as secondhand clothes. They’ve also started to make new yarns from donated garments.

Famm, who previously handled the Russian market for H&M, assumed his post only in January. He had lived in Asia, including the Philippines, for eight years while with another company.

Famm hinted at H&M’s expansion plans in the Philippines, though he declined to discuss specifics.

Even as its opening last year was delayed by a couple of months, the Swedish fast-fashion giant has been unstoppable in its expansion, opening five stores in just two months, that made even major industry players’ heads spin.

“We will definitely get to a place closer to every Filipino customer in the near future. It’s still early to say how many stores we’ll open this year or next year, but we’re looking at a few locations in Manila and other cities, and the customer will be positively surprised at the pace of our rollout,” said Famm.

Last year, there was talk that H&M’s delayed opening was largely due to the Manila port congestion, though the company kept mum on the issue. Famm was similarly diplomatic when quizzed if the port situation is still affecting H&M’s operations.

“We’ve had a positive experience in opening and running the business here,” he said. “Obviously we have new garments in our stores every day, so we have arrivals on a daily, weekly basis… Maybe we’ve been lucky, but it has been very good.”

He said H&M is quite happy with the reception of Filipinos to the brand. He said the Philippines has been “exceeding all our expectations. I get the feeling that Filipinos are very interested in fashion. They love to look good, and our competitive pricing when it comes to fashion quality and sustainability is very practical.”

He added in jest, “We’re pleased, not satisfied. In H&M, satisfied is a dangerous word.”