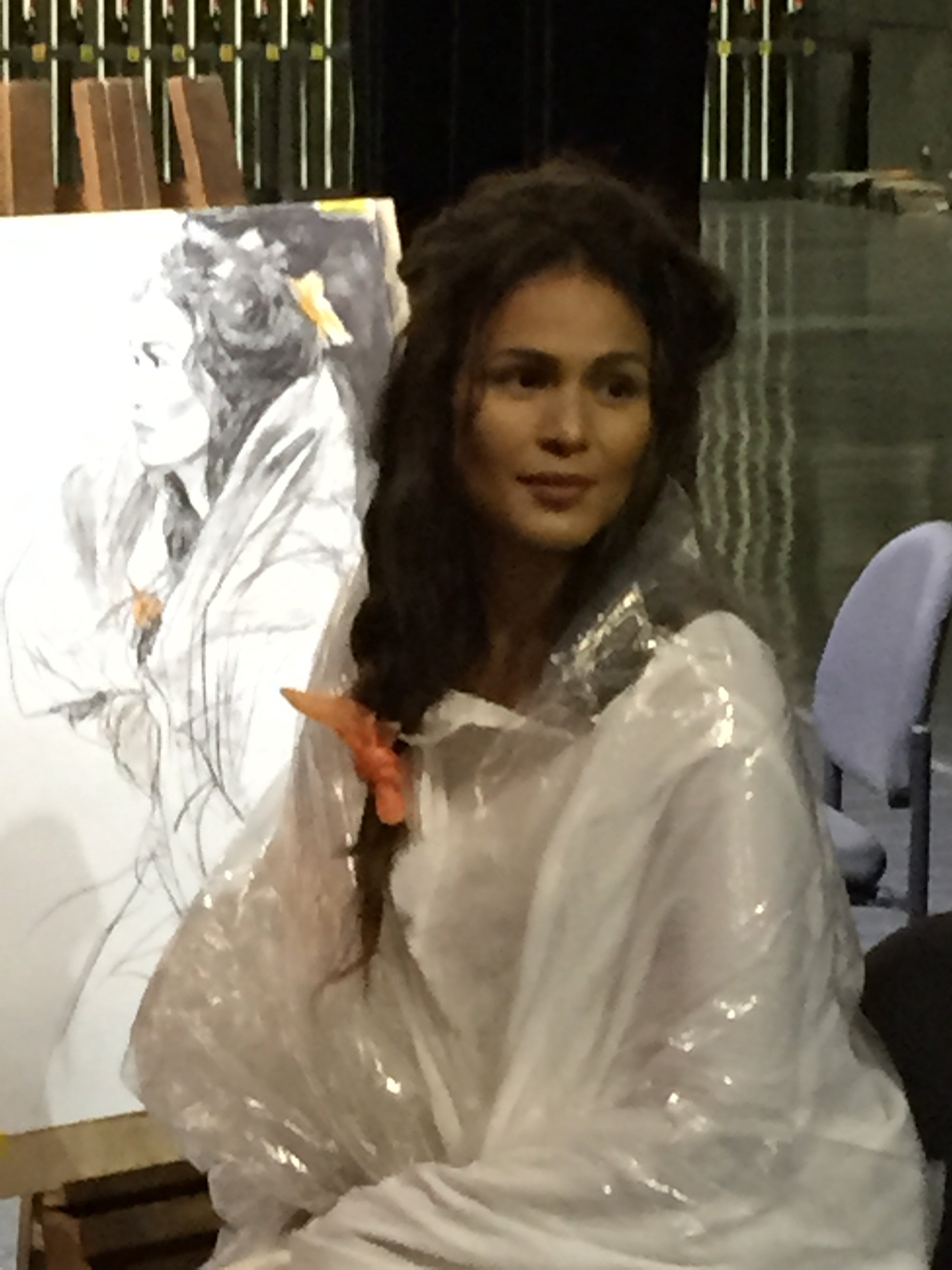 National Artist Ben Cabrera doing a portrait of actress Iza Calzado, who will be featured in “Sabel, Love and Passion,” a theater musical by Freddie Santos and Louie Ocampo at the Solaire Theater.

The year 1965 was an eventful time. The Beatles released their album “Help,” and the hills first came alive with the Sound of Music. Lyndon Johnson was elected to four more years in the White House, while we fulfilled one man’s destiny by electing him to Malacañan for a term of four years that eventually stretched to twenty.

It was also the year when a young man, Benedicto R. Cabrera, started his professional career as an artist with a solo exhibition in Ermita. After 50 golden years, he is now a National Artist, the man the art world refers to as BenCab.

BenCab Art Foundation, Inc. and Solaire Resort & Casino, have forged together to present a year-long series of exhibitions and events to celebrate the artistry of National Artist BenCab.

Dr. Joven R. Cuanang — longtime friend of the artist, noted neurologist, Chairman of the St. Luke’s College of Medicine, and Chairman of BenCab 50 Creative Years Celebration Committee — describes BenCab in this manner: “His creative energy through the years is boundless. And, wherever he was, he never stopped in depicting the Filipino in all his nobility, his despair, and his capacity to endure!”

Coinciding with the celebration of Arts Month last February, the artist kicked off the retrospective festivities with the endowment of an assemblage of sculptures entitled “Variations of Sabel,” to the University of the Philippines (UP) Diliman, where he studied Fine Arts, and which bestowed on the artist an honorary doctorate in 2010. The artwork was created through a grant from the National Commission for Culture and the Arts and is currently on view at the UP Theater lobby.

For the month of March, BenCab Museum in Metro Baguio mounted an exhibition of varied works from the artist’s personal collection, entitled “BenCab, Up Close and Personal.” The exhibition runs until February 28, 2016.

An exhibition of book art, entitled “Frames of Reference,” features a unique presentation of rarely seen collection of books, including BenCab’s original works assembled as books, which will be featured at the Lopez Museum and Library. Slated to open to the public from April 23 until July 4, 2015, the exhibition includes books on the artist, and books created in collaboration with the artist.

One of the most popular subjects of BenCab’s work is the inspiration behind “Sabel, Love and Passion,” a theater musical by thespians Freddie Santos and Louie Ocampo.

The musical will have its world premiere at The Theatre at Solaire on April 30, to be followed by a two-night regular run at the Music Museum in June.

BenCab artworks featuring the Philippine flag as the overarching theme, will be presented at the BenCab Museum from May 30 to August 2, 2015. Entitled “Ode to the Flag,” the exhibition is timed to artistically commemorate Flag Day and Philippine Independence Day.

The Bulwagang Juan Luna, Main Gallery of the Cultural Center of the Philippines will be the venue of the National Artist’s prints in the show Multiples, which opens on June 10 and will run until August 16, 2015. Freeway will present a fashion line dedicated to the National Artist during the exhibition’s opening cocktails.

July brings in another art exhibition entitled Pamilyang Pinoy at the BenCab Museum which runs until August 2015. The Secret Fresh at the Ronac Art Center in Greenhills, San Juan, will launch its limited edition BenCab designer toy collectibles inspired by images of BenCab’s art this August.

In September, the Samsung Digital Gallery at Yuchengco Museum will feature Augmented Realities: BenCab in Two Movements, showcasing the collaborative creations between BenCab and Polish choreographer Paulina Wycichowska. The exhibition will run until December 2015.

In celebration of Museums and Galleries Month in October, the Metropolitan Museum of Manila will host the retrospective exhibit BenCab: The Filipino Artist, which will run from October 4 until January 2016.

Ayala Museum shall be the venue for two important events for November: an exhibition entitled Portraits by BenCab which runs until January 2016; and the launch of the coffee-table book encapsulating the eight exhibitions for the year. The coffee-table book, entitled BenCab: The Filipino Artist, will be written by Dr. Patrick Flores and include essays from the each of the museum exhibition curators. Reservations for the book can be made through [email protected]

In December 2015, the UP Vargas Museum will open BenCab Performs, and the National Museum will be the venue for Appropriated Souls, an exhibit of “Larawan” and “Sabel” paintings. Both exhibitions will run until February 2016.

An Artists and Collectors Nite at the National Museum in January 2016 will be the ceremonial closing event of the year-long celebration of BenCab 50 Creative Years.

Musical is highlight of BenCab retrospective