Madrid Fusion Manila proves how the Filipino could be proud before the world | Lifestyle.INQ ❮ ❯ 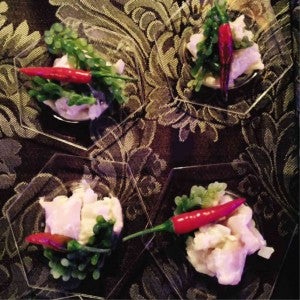 The Madrid Fusion Manila that runs until Sunday is a welcome, think-out-of-the-box idea that makes the world sit up and listen (or eat).

It’s not the run-of-the-mill promotion of Filipino cuisine, indeed of the Philippines.

“People have always asked me, ‘How do we promote Filipino cuisine?’” Tourism Secretary Ramon Jimenez told us at the Malacañang Palace grounds last Thursday, before the cocktail reception for the foreign and local chefs participating in the event.

This is the first time that this world-famous gathering is held outside of Spain.

At sundown, guests entered the Palace grounds to the upbeat music of the Makiling Ensemble—energizing sounds emanating from traditional and ethnic instruments played by young artists (from the Philippine High School for the Arts in Makiling, Laguna, we presume) which included, we were told, Diwa de Leon, son of our good friends Anna Sarabia and NCCA head Felipe de Leon Jr.

The Diwa we last saw ages ago was a kid so we couldn’t recognize that young man with a hat on.

The music wasn’t rustic or stereotypical native. It was hip and cool—perfect for this innovative event.

The tourism secretary was as upbeat as the music. According to him, the country earned some P4 billion this year from the influx of foreign tourists. 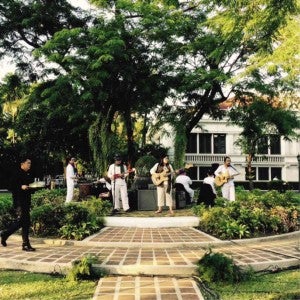 Apart from that, however, what really gladdens his heart is how local tourism has grown by leaps and bounds—to a trillion pesos. That’s how much Filipinos are spending to travel around the country these days.

We were not surprised at all by that revelation.

It seems this travel frenzy began with the annual trips to Boracay. Next came exploring Palawan, Bohol, Cebu, on top of the weekend road trips to Tagaytay and Batangas.

Pinoys have even rediscovered Baguio more recently. The Lenten holidays the past two years in the summer capital have seen overflow crowds—and humongous traffic jams.

Filipinos are becoming more and more like Americans or even Europeans, who plan their vacations way ahead of time and make them the highlights of their year.

For instance, I have some friends who have booked their destinations for Christmas.

And many have travel plans for the long May 1 Labor Day weekend.

Whichever way you look at it, this must be a sign that Filipinos are somehow feeling secure in their own country, not the least of which is its economy.

Jimenez noted how, today, “there’s not a single province” in the country which doesn’t have tourism in its agenda. Indeed, provinces are recognizing the pivotal role tourism plays in their growth. It could be a viable revenue source, a way out of poverty. 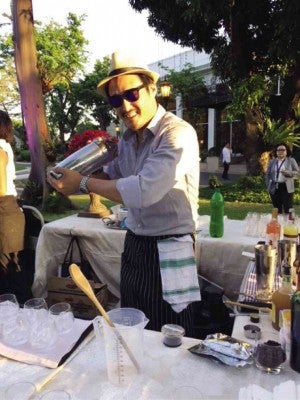 “They say that, more than foreign tourists, Filipinos themselves are the hardest to please,” said Jimenez. Hardest to please as tourists right in their own country, he meant.

This is why he’s proud of the fact that Filipinos themselves are becoming the No. 1 tourists in the Philippines.

But while there are those who bemoan another fact, that there are Filipinos who’d rather go on foreign trips than explore their own country, Jimenez feels that this could also be a good thing.

“The more my countrymen travel, the more sophisticated they become and learn to appreciate their country,” he explained.

Later that night in the Palace, in his brief speech, President Aquino noted why “eating is indeed more fun in the Philippines.”

He began by recalling how, at one time, before he became President, he and his aide were left to their own devices and attempted to cook—with dire results. They almost burned the soup.

That ice-breaker brought him closer to an audience not typical of Palace gatherings— consisting mainly of culinary professionals and restaurateurs, not the usual businessmen or politicians.

This must have been one of the rare occasions that a Palace event was held for the culinary arts industry.

Top Filipino chefs as well as visiting foreign chefs (“rock stars” of the era) were around. This was the eve of the series of activities of Madrid Fusion Manila, to be held the next day at SMX Convention Center.

From April 24 to 26, there would be lectures, demonstrations—and, of course, food tasting—by these culinary stalwarts, a “palate conversation” of sorts. 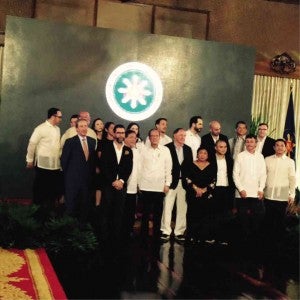 At least a thousand people were expected to attend, most of them ticket buyers.

That Thursday night at the Palace, the “conversation” between Filipinos and their Spanish counterparts had somewhat started.

Top Filipino chefs prepared the most innovative cocktail food they could think of, from talangka appetizer to churros.

Margarita Fores, who helped Madrid Fusion Manila become a reality, prepared the cocktail buffet. By now she’s an expert in sourcing food from all over the country.

Mingling with the guests, Mr. Aquino would stop by the buffet once in a while, curious about the spread. He stood before the deck of pastillas and wondered aloud if we should explain to the guests a brief background of the sweets.

As it turned out, there was no need for that. The foreign culinary personalities feasted on the pastillas, longganisa and other native fare. No questions asked.