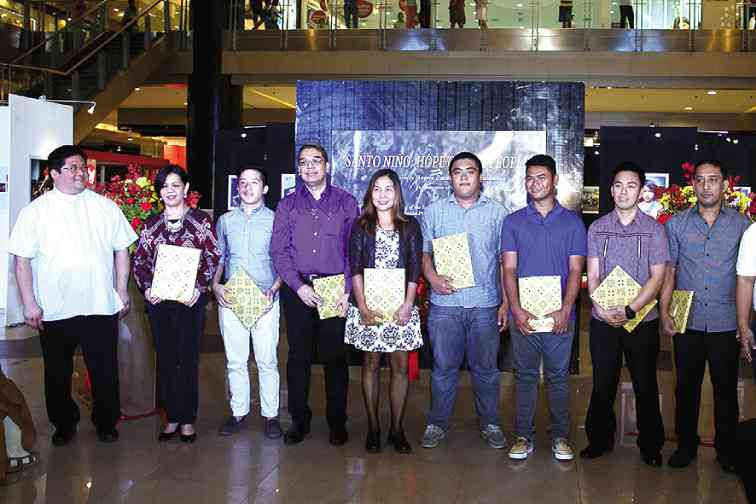 FR. HAROLD Rentoria, OSA (left), commissioner of the National Commission for Culture and the Arts, opens “Santo Niño, Hope of the People,” an exhibit at SM City Cebu of photographs of the Santo Niño and Kaplag fiestas of Cebu taken by Angelo Bacani and Paul Quiambao, and curated by John Delan Robillos of the NCCA National Committee on Art Galleries.

The country’s oldest Catholic relic, the Santo Niño de Cebu, has a connection to important historical events, including two milestones in world history, says an official of the National Commission for Culture and the Arts (NCCA).

“The image of Santo Niño is also a tangible heritage of our world’s history,” says Fr. Harold Rentoria, OSA, head of the NCCA Subcommission on Cultural Heritage. “We should look back at the events for us to better appreciate what we now have as a people.”

Father Rentoria points to two occasions in the 16th century: the first circumnavigation of the globe during the time of Ferdinand Magellan, and the discovery of the tornaviaje or the return route from the East to the West, which heralded the advent of the galleon trade or interocean commerce.

“Santo Niño, having been brought in the country by Magellan, had still been part of the success that voyage had accomplished,” the Augustinian priest stresses. “The tornaviaje was discovered by Fray Andrés de

Urdaneta, the Augustinian friar who celebrated Mass immediately after finding the image in Cebu in 1565, 44 years after the Spaniards were completely driven out of the islands.”

Other stories about the historic image of the Child Jesus are compiled in the commemorative book “Kaplag 2015” (Augustinian Province of Santo Niño de Cebu-Philippines Inc., 2015, pp. 193), launched on April 20 at SM City Cebu.

Highlighted in this publication are the connections of the holy image, the Augustinian Order and the Filipino people.

One article, “Some Historical Notes on Kaplag: The Beginning and the Propagation of the Filipino Devotion to the Child Jesus,” traces the origins of the image. Digging into archival files, such as those in the General Archives of the Indies in Spain, author and book editor Fr. Czar Emmanuel Alvarez, OSA, uses the notarized testimonies of actual witnesses of the discovery of the image to reimagine where the icon came from.

In “The Birth of the Augustinian Province of Santo Niño de Cebu-Philippines,” Prior Provincial Fr. Eusebio Berdon, OSA, recounts the formation of the autochthonous province, and the trials and triumphs that go with it.

Other articles tackle the influence of the devotion to Sto. Niño on Filipino values and family, even in early Christian literature. Two articles are dedicated to the other known images of the Child Jesus in the country: Sto. Niño de Tondo in Manila and Sto. Niño de Arevalo in Iloilo.

Complementing the articles in the book are photos by Father Alvarez, Paul Allyson Quiambao and Angelo Bacani.

Its editor says the book aims not only to deepen the faith of the people in Sto. Niño, but also to discover the identity, in words and in action, that the Child Jesus has gifted each Filipino.

“The religious devotion to the Santo Niño has become so deeply ingrained in Filipino culture that other images of the Child Jesus emerged and equally drew countless devotees in various parts of our country,” Father Alvarez writes.