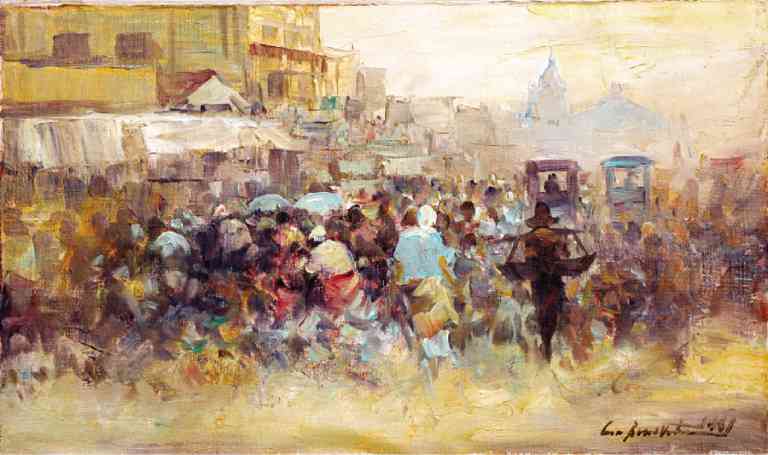 “No other tree grows under the shadow of a great oak tree.” That statement was reputedly made by the great French sculptor Auguste Rodin.

The dire warning has come down to us through generations as a pessimistic foretelling of the future of any progeny born to an illustrious parentage.

But, life, as always, holds surprises. Not all prophesies are fulfilled. In the history of Philippine art, one such inspiring example is the story of Cesar Buenaventura (1922-1983) whose story is narrated in the book authored by Jane Stangl Alvero. The name or word Buenaventura is Spanish, meaning “good fortune.”

Cesar was the son of the illustrious artist and colleague of Fabian de la Rosa, under whose deanship at the University of the Philippines (UP) School of Fine Arts, he was a member of the faculty. Among his students was someone named Fernando Amorsolo.

Regard, for instance, the credentials of the elder Buenaventura: a bronze medal for “Despues del Baño” (After the Bath), at the Exposicion Regional de Filipinas held in 1895; a silver medal for “Ya Vienen” (They Are Coming) from the International Society of Artists, which, as reported by Stangl, bested even Maestro Fabian de la Rosa. He was a master of the landscape and of portraiture, which is attested by his numerous commissions.

And yet, this same maestro, whose life was devoted to art, did not want any of his children to make art a lifetime career. For reasons only known to him, Teodoro Buenaventura was all too aware that art was not always the paradise perceived by his admirers, and that it was a life of struggles and sacrifices, which he did not want to inflict on his children.

But curiously, he allowed his eldest child Teddy Jr. to take up Fine Arts at UP before the war. When the younger Cesar also showed interest in art, Teodoro most likely did not want any sibling rivalry to ensue.

And how did young Cesar realize that his father was really determined to keep him away from art? “When caught painting on the sly as a boy, his father broke his brushes.” Fortunately, a change of mind years later did come to the father. “Cesar assisted his father at the age of 10, but it was only at the old man’s retirement when Cesar finally received formal instruction from his father.”

Upon the figure of Cesar Buenaventura can pivot a significant aspect in the unfolding of contemporary Philippine art. In particular, the catalytic separation of so-called representational art, as championed by Amorsolo and the modernist rebellion, instigated by Victorio Edades, who identified a band of emergent postwar artists, the likes of Vicente Manansala, Hernando R. Ocampo, Cesar Legaspi, Anita Magsaysay-Ho, Romeo Tabuena et al, as the harbingers of Philippine modernism.

Amorsolo’s adherents, however, were themselves formally trained at UP, among whom were Gabriel Custodio, Miguel Galvez, José D. Castro, Salvador Cabrera, Simon Saulog, Ben Alano and Serafin Serna.

Such deep division of artistic interest and intent came to a head with the conservatives’ walkout, in the mid-’50s, at an Art Association of the Philippines (AAP) competition. Withdrawing their paintings, they displayed them across the street where the venue was being held along Isaac Peral, now United Nations Avenue.

In time, these artists eventually found themselves setting up studios along A. Mabini St., which was itself a centrally located commercial strip convenient to Manila’s tourist trade and market.

It is in this artistic enclave that Cesar Buenaventura emerged to be a key player, indeed a most significant figure as he emerged to be the most successful artist produced by this erstwhile denigrated school of painting.

In 2014, no less than the Cultural Center of the Philippines paid homage to the Mabini Art Movement. It was curated by Pearl E. Tan, who wrote: “Mabini Art has been known to many as the paintings that can be bought at low prices in the shops along Mabini Street and other parts of Ermita in Manila… because the paintings are easily produced in quantity, most art experts and non-Mabini artists dismiss Mabini Art as low-quality, or cheap art in contrast with the highly valued fine arts that are shown and sold at much higher prices in culturally recognized or legitimate art galleries. However, such disparaging aesthetic judgment and stigmatization prove to be unwarranted when Mabini Art is studied in its proper sociocultural, historical, and art-historical contexts. In the academe, Mabini Art has been relegated to the margins of the history of the Philippine Art owing to the pedagogical bias toward the aesthetics of contemporary arts which have developed from the modernist art movement, the antithesis of the school from which Mabini Art emerged.”

Against this sprawling historical and personal background, the art of Cesar Buenaventura is on full celebratory exhibition at the Galerie Lienzo. It allows the the new generation of art enthusiasts and collectors, to admire his art from a fresh viewpoint, as if with eyes unblemished by the past’s regrettable bias and prejudice . In this exhibition, the works of Buenaventura are testament to Buenaventura’s renown as Mabini Art’s dazzling lodestar.

To enter the exhibition is to sense immediately the wide range and almost effortless painting skill, applied on classic Philippine iconography, and the artist’s ability to synthesize influences, suggest the source without being overwhelmed by the influence. Using both his trademark palette knife and brushes, Cesar limned an impressive artistic production. Here are the landscapes and seascapes that capture the various moods of time of day, from the seething blaze of noonday to the gently brooding twilight, daubed with shades and hues that reflect the emotional temperature of the day. Landscapes and seascapes are settings for the play of clouds and waves, foliage and vegetation. The push-pull combination of impressionism and expressionism is possibly the reason for the indefinable tension in his works, and he succeeded in merging and alternating both idioms since, fortunately, he was never intimidated by isms, as other high-minded artists of the time, were.

Indeed, Buenaventura was totally unabashed by his Amorsolo phase (and why should he? He was once Amorsolo’s manchador, or apprentice-assistant, learning everything at the closest range from the master. Coincidentally, too, Amorsolo was Cesar’s godfather.)

Then, too, there was the so-called Oriental or “Tabuena” phase, a fascination with Romeo Tabuena’s wispy brushstrokes and light, washy pigments that transformed dark heavy-set carabaos into ethereal beasts of burden.

Buenventura portrayed the Filipino at work and at play. He painted planting rice and winnowing scenes, market places, with vendors whose crouching figures often had their backs to the viewer, reducing them to mysterious masses and volumes. He painted fishermen drawing their nets. At play, the Filipinos are caught in the excitement of a cockfight.

His still lifes of Philippine fruits, laid in casual disarray unlike the formally arranged works of other artists, combine sensations of sweetness and summery heat.

A voluptuary of color, Buenaventura relished certain specific colors. He reveled in blues, which he regarded as a versatile mood-enhancer, an atmospheric haze, dispensing it various shades of royal, electric, powder puff blues and aquamarines. When he painted nighttime scenes, he rendered them with flickering lights, punctiliously dabbed with his trusty palette knife. He also had his “Siena” landscapes, accentuated with strokes of golden browns, rust orange, beige and caramel.

It seemed that Buenaventura regarded his talent without anguish or angst. He accepted it as a gift as natural as breathing, like that of a natural singer, who when he opens his mouth, cannot help but produce a pleasant and mellifluous sound.

What is not well known is that, while Mabini was Cesar’s domain, he stepped out into the world outside, with exhibitions in Hong Kong; California; Washington, DC; New York; Bern and Zurich, Switzerland; and Naples and Florence, Italy.

Today, when we consider that the works of Buenaventura were purchased by numerous foreign visitors and tourists, bringing his works to their homeland, now hanging in their living rooms, dining rooms and conference halls, one can well imagine the visual resonances of Philippine life brimming on these walls all over the world. Amorsolo would indeed be a far second.

Thus we can only concede that, artistically, Cesar Buenaventura is the Philippines’ most itinerant “Ambassador of Goodwill.” In the present day art scene, fast hurtling itself into an unnerving fevered state of speculation, Cesar Buenaventura’s show at the Galerie Lienzo affords the Filipino public a chance to touch base with a once neglected moment in our art history that is now receiving its well-deserved and timely reassessment.

In her book on the artist, Stangl concluded: “It may be said the world saw us through his eyes. How many outstanding Amorsolo or Fabian de la Rosa paintings are out there showing off the pristine beauty of these 7,000 islands to the rest of the world? Perhaps a few. But from the paintbrush of Cesar Buenaventura, there are assuredly, legion.

“On the international scene, Cesar Buenaventura was the most well-known landscape painter of the country from after the war until his death in 1983. There has never been an artist who can make the same claim.

“It is something that must be said: There will never be another Cesar Buenaventura, inside, or outside, Mabini.”

The art of Cesar Buenaventura, whose paintbrushes were once broken by his father, is now being seen in a different, more approving light.