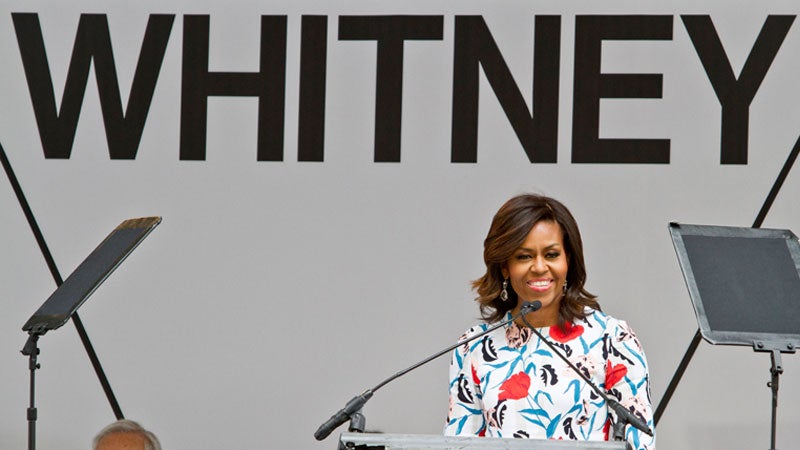 NEW YORK — Michelle Obama praised New York’s Whitney Museum of American Art for its outreach to the community during a ribbon-cutting ceremony at the museum’s newdowntown home Thursday and said she “fell in love” with the Renzo Piano-designed building.

“This is the most beautiful freight elevator I’ve ever ridden on,” the first lady said after what she described as a brief tour. “Just about every space in this museum is magnificent.”

The $422-million building at the southern terminus of Manhattan’s High Line elevated park in the heart of the trendy West Village opens to the public on Friday. The Whitney’s old building on the Upper East Side will house the Metropolitan Museum of Art’s contemporary collection.

“Mamma mia, what a joy,” said Piano, the Pritzker Prize-winning architect whose buildings include the headquarters of The New York Times and the Pompidou Center in France, designed with Richard Rogers and Gianfranco Franchini. Piano was awarded the top architecture prize as laureate in 1998.

The Whitney was founded in 1931 by art patron Gertrude Vanderbilt Whitney to showcase American art — then considered less prestigious than works from Europe.

The museum was housed on Madison Avenue in Marcel Breuer’s distinctive modern building from 1966 until last year when it closed in preparation for the move. Its permanent collection includes works by Edward Hopper, Willem de Kooning and Andy Warhol and many others.

She added: “And growing up on the South Side of Chicago, I was one of those kids myself. So I know that feeling of not belonging in a place like this.”

But Obama said the new Whitney’s inaugural exhibition, “America is Hard to See,” asks important questions about what it means to be American. She said it’s telling young people “that their story is part of the American story, and that they deserve to be seen.”

She said the Whitney is sending a message of inclusion not just with its art but with its educational programs. “You’re reaching out to kids from all backgrounds, exposing them to the arts, showing them that they have something to contribute,” Obama said.