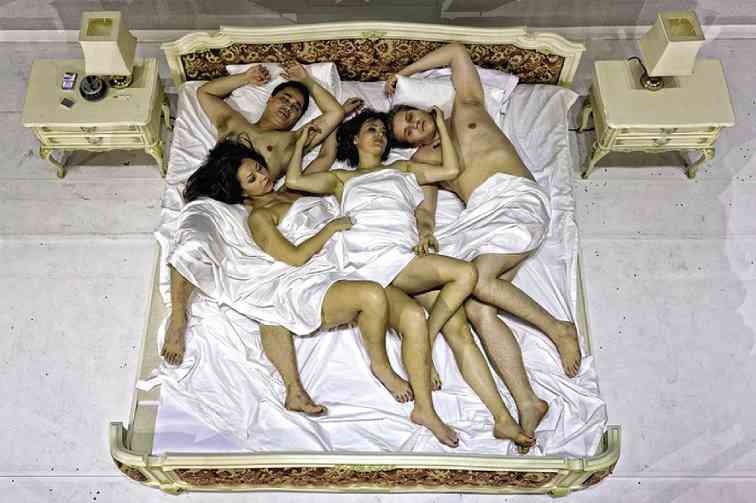 The latest production of the Mozart opera in Basel Theater in Switzerland is a “bold and daring” version by controversial Spanish director Calixto Bieito.

While Espiritu was fully covered, Mozartian wigs and all, in La Scala and other productions, in the Basel production, he sings the opera’s most tender arias in boxer shorts. The cast are in various states of undress.

The opera’s teaser goes: “Can women be faithful? Don Alfonso is convinced they cannot. He mocks his friends Guglielmo and Ferrando, who are certain about their fiancées’ fidelity. But Alfonso is adamant: He wagers that the two women can be seduced in next to no time. The wager is accepted. Guglielmo and Ferrando arrive in disguise to court the two women. What started as a lighthearted game soon becomes deadly serious, raising doubts in all the persons involved about their partners, and the existential question about the permanence of relationships. Bieito takes a fresh look at Mozart’s famous dramma giocoso about the timeless question of whether marital fidelity is possible or not. Does everybody behave the same way? Who is giving whom the runaround here?”

Espiritu told the Inquirer the opera’s original plot no longer applies in the Basel production as the director focused on what happens as characters reflect on various possibilities of infidelities. The opera is contemporary.

“So, in retrospect, the opera lingers on the feeling of love lost, the ensuing pain, the feeling of hope and hopelessness,” he said. “Indeed, the opera was deconstructed and put back together in a more abstract manner. All the recitatives were cut and replaced with text from M. Houellebecq. Basically, the music has to fit what the concept stood for. The music was not in order and was placed according to where the drama is at the moment. It was quite interesting, might I say. It took me a little while to be convinced, but I had to look at it with an open mind.”

The big change in this production is that his character Ferrando is no longer the young and naive soldier or even a teenager.

“In this version, we are already middle-aged men and women who have been married for quite some time,” he disclosed. “Having been married to Dorabella for years, we go to a swingers club to spice up our marriage. Little did we know that we would ruin even more our relationship and hate each other even more after the deed was done.

“This is totally not the previous productions of ‘Cosi Fan Tutte’ I have done. By far, this might not even be called ‘Cosi Fan Tutte.’ It’s just the idea of how hard relationships can be between two people. Just like in real life, where couples go through rough patches in their relationships. I must say this new production is a very blunt and realistic take on the human condition.”

Opera productions have changed drastically through the years.

“Living in these times when realism and Hollywood are ruining people’s sense of imagination and suspension of disbelief,” Espiritu explained, “people have been desensitized today. Directors, actors, singers, theater singers alike have to push the envelope to create effective ways to get through to people.

“I have to confess that I made sure that I did not go on stage without any clothes on. In this instance I was wearing boxers. This to me seems reasonable. I have no problem with this. It does make me feel a bit self-conscious about my body, though, to be honest. But, to do a job effectively, you have to do your best to collaborate so that you give a better chance for the production to be successful.

“Part of the problem nowadays is that we have so many reservations that no one wants to give an inch. If it sounds and feels reasonable, why not? But I have to address the fact that this depends on the artist’s limits and capabilities. We have to take that into account.”

The tenor said he was lucky to be part of a new production and to work with Bieito, a well-known director.

He added he was lucky to work with Russian soprano Anna Princeva as Fiordiligi; Ukrainian baritone Iurii Samoilov as Guglielmo; conductor Ryusuke Numajiri and the Basel Symphony Orchestra. and the Theater Basel ensemble.

“As far as doing this concept of ‘Cosi,’ I cannot stress this enough,” the tenor said. “To be able to be part of something new as part of creating something less expected, the people involved has to work even extra harder to collaborate and become successful at it.”

Earlier, Espiritu debuted in the role of Rodolfo (“La Boheme”) in Theater Magdeburg in Germany and Basel in Switzerland. He loved the part and, to his surprise, he was well-received.

“I truly enjoyed playing Rodolfo, I wish I can sing it more and do it more,” he said. “But, sometimes with my lyric voice I have to go back to the lighter side of the tenor repertoire. I still want to be able to sing some bel canto stuff.”

Offstage, the tenor enjoys being a father to his firstborn son, Aaron. He admitted singing had taken a new twist when he became a father.

“It is very different. Now, you sing not only for yourself but you also for your family and loved ones,” he said.

The tenor’s other engagements for the year include singing Duke in Giuseppe Verdi’s “Rigoletto” with Oper Klosterneuburg, with Daniela Fally as Gilda on July 4; another Don Ramiro in Gioachino Rossini’s “La Cenerentola” in his debut appearance with Staatstheater am Gärtnerplatz (a Brigitte Fassbaender production) in Munich, which opens Nov. 5.