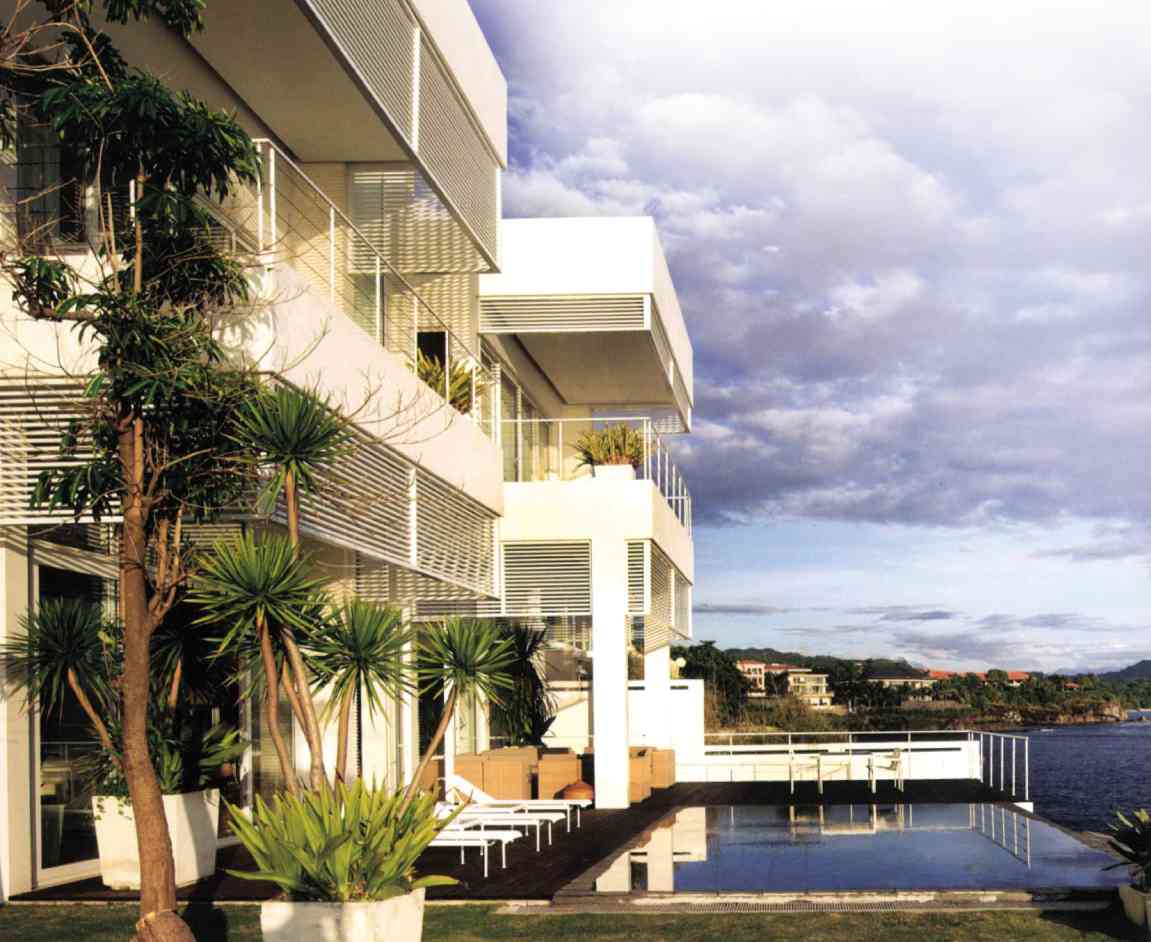 ARCHITECT Chut Cuerva’s C House in Punta Fuego paid homage to “the profound beauty of the ocean it gazes upon.” The house has overhanging balconies each with a skirt of louvers for shade.

Filipino homes are becoming more refined with globalization. Yet despite the modern edge, there’s an underlying element of being truly Filipino.

The emergence of sleek and sophisticated Filipino architecture at the turn of the millennium is the thesis of a new book by British architect and author Robert Powell. “Contemporary Houses in the Philippines” (Images Publishing, Singapore) features 25 houses that define the global outlook of the featured architects and the cosmopolitan lifestyle of their clients.

Like many foreigners, Powell came here in the early 1990s with a romantic notion of a modern tropical house which was close to the bahay kubo concept. He wrote about the bamboo residence of architect Rosario Tan and the Spanish colonial house of fashion designer Patis Tesoro. The home of architect Francisco Mañosa, meanwhile, embodied the contemporary application of indigenous materials and crafts and Filipino space.

Then Powell met modernists such as National Artist Leandro Locsin, and Edgardo Ledesma of Locsin and Partners, and the minimalist Lorenzo Calma. This led Powell to see the works of Eduardo Calma, José Ma. Yupangco and Anna Sy-Lawrence, among others.

In the course of Powell’s search for homes to be featured in the book, he met more Filipino architects such as Royal Pineda, Jason Buensalido, Carlo Calma, Angelo Mañosa, Ricardo Cuerva and Alexius Medalla.

“By sheer good fortune, I’ve stumbled across young Filipino architects. They are not building high-rise towers. They are in the stage in their lives producing great architecture,” he told Inquirer Lifestyle.

Having written books on modern Asian houses, Powell observed that the trend is to adapt to the climate. At the start of the 20th century, Singapore, for example, built bungalows to connect with the climate, and shut out the rain and sun.

“In the mid-20th century, air conditioning took over,” he said. “People designed enclosed houses, and it had an effect on people relying on air conditioning. In recent years, with the global crisis, people are turning back to sustainability: planting greenery around the house; using less reflective surfaces; extending the roof; making shaded spaces to live in; making one room wide with windows on both sides… Natural ventilation is applied a greater part of the day. In the evening, you close the windows and use the aircon for sleeping in.”

The Internet has greatly influenced architects’ perspectives. “In the past 25 years, the pace of communication has changed. They can get ideas from the world in the flash of an eye,” said Powell.

Still, he noted that the architects proudly declared their Filipino identity despite their contemporary designs. He likened the architecture to designer Kenneth Cobonpue’s furniture: “thoroughly modern but it has a little flair.”

Since Filipino architects are well-traveled and well-connected to their relatives overseas, it is inevitable that they would adapt to the international style—rectilinear forms, concrete, glass and steel, and open spaces.

Powell said there are two ways of looking at architectural design in the Philippines. “Lor (Calma) and Lindy (Locsin) were as modernist as the Bauhaus. Bobby (Mañosa) was always about bamboo and bahay kubo, and finding Filipino identity through natural materials. They are two ends of the spectrum. There is the younger generation, like Royal, Carlo and Jason, who wants to push the modern side,” explained Powell.

“The right age for an architect is between 45 and 55. That’s when they’ve tried out ideas and are beginning to build up ideas. It’s the most creative part of their life,” added Powell.

On the other hand, young Angelo Mañosa continues his father’s tradition of eco-friendly homes inspired by the bahay kubo, but using modern technology.

“Contemporary Houses in the Philippines” educates readers on looking at houses in terms of spatial experience rather than just décor. In the past, many of the local publications focused on interiors and style.

“I give the reason behind the design, the things that affect an architect. With plans, you follow the architect’s thinking. For an architect, you need to read space. I come in and there is the verandah. I go to the door which opens to a double-height space. You can follow the processional route of the house by looking at the plan. You can see how the north point responds to where the sun is rising and setting. It’s essential to understanding architectural design,” Powell pointed out.

The book features houses in the cities, cutting-edge designs, beach getaways and homes outside the metropolis. “All of the houses bear these qualities of manipulation of space to give unfolding experiences,” said Powell.

In the book, Powell describes Cobonpue’s house in Cebu, designed by Budji + Royal Architecture + Design as “a linear composition of linked pavilions topped by mono-pitch roofs.”

The romance lies in the integration of views and building around the existing tries. “It retains a processional route through the trees and encloses the courtyard spaces so that there are different experiences. You don’t understand everything at once. Things are gradually revealed to you. There is a buildup of anticipation that is part of the architectural language,” Powell said.

While surfing the Net, Powell discovered Cuerva’s weekend house in Nasugbu, Batangas. Codesigned with Tisa Samson, the modernist expression consists of the main house and the guest pavilion. “The house is very open. You come in at an angle and there’s the end of the axis, the island. You descend the levels until the lowest, and onto the infinity pool and sea,” said Powell.

Built on the ridge in a subdivision in Cebu, the Cut-Fold House by the Cebuano firm Arkinamix (Medalla and Ryan Rasines) derived its dynamic form from the folds and cuts of a strip of paper.

Powell described Carlo Calma’s house as “cool” and cited a swirling steel faucet in the powder room. “He’s got a lot of off-the-wall ideas. There are many things that are quirky. He likes to go to town on them. In the bathroom, you turn on the tap and the water starts from the top and spirals down the tube. All you want to do is wash your hands. Water becomes part of architecture.”

The book ends with Tan’s rustic bamboo house which overlooks the mountains of San Mateo, Rizal.

Of the 25 houses featured in the book, structural engineer-turned-photographer Albert Lim loved the bamboo house. The main material, bamboo, is highly renewable, and the design leaves a low carbon footprint. The book mentions that the house “breathes” because of the permeable slatted floors and high ceiling, evocative of the bahay kubo.

“You walk on split bamboo floors and they move a little bit. When there is wind, it sways a bit,” said Powell. “It is equally modern to the lovely white houses because it’s sustainable. There’s no air conditioning, just the fan on.”

Powell observed that Filipinos love to decorate their homes, particularly with local artifacts which lend character. “There is a tendency to put a lot of things into interiors. Others pointed out that Filipinos love to put family photographs, paintings, and tribal artifacts from Ifugao and Mindanao. That is not always true of other Southeast Asian countries. It may be particularly Filipino but some houses are quite clean.”

All told, Powell hopes that more books on Filipino architecture would be published. “I am pushing the architects. The ones I liked are doing tremendous work and need to be encouraged.”