I fell in love with ‘Out of Africa,’ now I have my Palayupoy | Inquirer Lifestyle ❮ ❯ 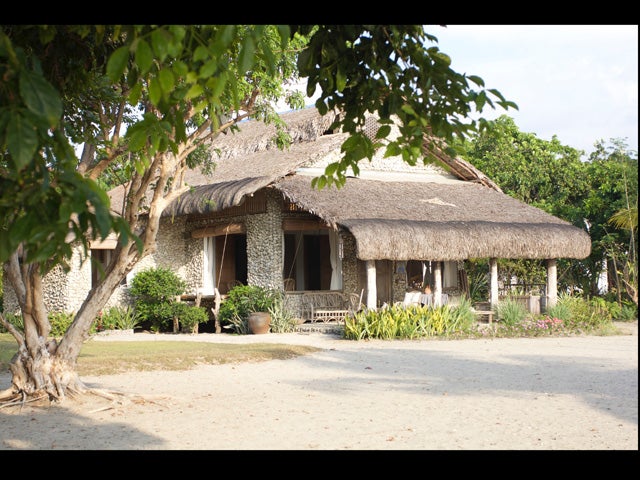 SIMPLE house on the shores of Currimao has roofing done by Cagayan folk.

I fell in love with ‘Out of Africa,’ now I have my Palayupoy

I knew I would build a farm after I saw the movie “Out of Africa.”

I fell in love with Meryl Streep  doing the Isak   Denizen opus  where she left  Denmark  to build her coffee plantation in Kenya.

The movie  fascinated me no end.  I read the book  written by this elegant  writer  many times over.

My dream is to build my farm like hers, for my  remaining years, close to nature and my Ilocanos whom I know so well.

When the partner of my German friend died and he decided to give back the land they had leased for 10 years from our family on the the shores of Currimao, I knew I could start to build my dream.

They leased the land because Currimao reminded them of their place on an island in northern Germany where the waters were cold even at the peak of summer. I would learn later that they were in the youth army of Hitler’s Germany and were here in the Philippines raising monkeys from the wild to export them as experimental animals.

They came to Currimao to bask in the torrid sun fanned by the unending breeze blowing from the south China sea. They built a bamboo and nipa aerie that caught all that breeze,  lulling them to a stuporous lanquor in the noonday heat.

As the reddest of sunsets sank slowly, they would swim in the warm waters, watching the end of the day while the birds found their roost in the giant bitaog trees.

In December, when the moon was full and the grasses were drenched with dew, they would lull themselves to sleep on bamboo beds under the coconut trees.   The moonbeams were polished by the redolent smell of dama de noche. Only the  occasional staccato of lizards disturbed the floating dreams of their many  perfumed nights. For Europeans,  this was paradise!

Years before, FM, the Ilocano strongman had built his beach house close to the gigantic bitaog trees near my land. His daughter told me that her father loved the breeze in Currimao that ruffled the leaves of his bitaog trees. He paid homage to this enchanting breeze by naming his beach house, Pariir,  which was how the Ilocanos named it.

The bitaog trees reminded FM of his childhood when they would extract oil from its nutty fruit to fuel the night lamps. He would study deep into the night.

When he became  President, he built a beautiful beach house in this property, where  his Cabinet would  come and meet during the summers. It was  like a Camp David.

Returning from exile, his daughter transformed  the looted beach house  into  a  bamboo and nipa palace that looks now  like a Japanese dreamhouse in a forest of bitaog trees.

In the summers, she sends a basket full of ripe tomatoes adorned with a spray of coconut flowers  to let me know that she is in residence. Her taste is impeccable. I am lucky to have her as my neighbor.

Like her father and the Germans, I, too,  fell in love with the Currimao breeze, and named my acquired ayre, Palayupoy. It is synonymous with Pariir, our homage to this healing breeze.

It is the perfect place to live.

The house left by the Germans was plain. Only  the roof was remarkable. It was made of thousands of dried nipa leaves braided in place in close formation like soldiers ready for a   parade. It could only be done that way by the folks of Cagayan where they had been doing roofs for generations, that could withstand the insane winds of countless typhoons that lashed this part of Luzon.

I reworked the building as the architect, to infuse my deep-rooted Ilocano sensibilities into Palayupoy. I widened the rooms to accommodate a bamboo papag.  I put jutting bamboo siesta beds on the wide windows.

I designed  frames from the patterns of the farm baskets made in Badoc. I dug corals and plastered the outer walls with them.  I used the pattern of the inabel to make a carpet of stones from Pasuquin.

I had Perry Mamaril do the bamboo chandeliers made of crooked bamboo trunks, dressed with handmade paper. When they are lighted at  twilight they cast a cool glow on the polished bamboo floors.

The Ilocano mosquitero curtains float with the breeze. Seashells frame mirrors.  Bonsai  from Bangui welcome guests  into bamboo beds and hammocks all over.

The kakawate, looking like Ilocano cherry blossoms, fill terra-cotta jars from San Nicolas.  They make very good flower arrangements—free at that! It is the Ilocano way. We use only what we find on our yard.

In this three-hectare  farm, I dug  ponds,  fed by a natural spring that flows  from the knotted roots of an acacia and a bitaog tree. I pump water into the ponds so that it is full all year round. The tilapia are now teeming among  the water hyacinths  and  cattails growing tall  in the mud.  There is the sound of trickling water from bamboo  fountains hidden among clumps of edible ferns.

In Africa, the Danish writer  planted coffee. In Palayupoy I began planting  the vegetables of “Bahay Kubo” ditty. They would be harvested early in the day to make the Ilocano dish of pinakbet, which my European guests  claim to be the local version of ratatouille, only better, especially when slow-cooked with slices of bagnet.

I started to raise goats to be butchered on birthdays and other special occasions. But when I have a big herd,  I will make goat cheese that will be perfect with the wood-fired  pan de sal from the local bakery.  I  developed my taste for feta cheese on my many travels to Greece.

I need to have more chickens for a fresh supply of eggs. Every morning, I will steal  from the chicken coop as the hens are cackling with the roosters, to make omelets that will be  fluffier  than those in the restaurants of the Cote d’Azur!

And perhaps, I will have ducks, geese and a peacock that struts on the yard, preening with its multicolored feathers, under the huge acacia tree.

In the summers , there will be hives of big red ants hanging from the branches of the duhat trees ready for my farmhand to raid the big fat white eggs that taste like caviar.

And when the rains pour  and the thunders clap, and the lightning cracks the sky with blinding flashes of silver white, we will harvest mushrooms from under the clumps of bananas at the back of the house. The mushrooms will  be perfect for the steaming broth of the greenest malunggay leaves yellowed by the freshest squash flowers, salted by a hint of fermented fish.

The seeds of the reddest of papayas I harvest, the envy of the Japanese, will be sown row upon row  in the hottest part of the land. Its fruit is sweeter than any that I have tasted.

A slice  is a fitting postlude to a  hearty breakfast of champorado made of ballatinaw (violet)  rice, longganisa from Batac, and crisp dried flying fish—better than bacon.

I will let the mangoes flower naturally, so that the greenest mangoes will be as natural as they can be when they are made into a tangy drink. The ripe ones will go well with  slow-cooked sticky rice  and a few morsels of dark molasses, or eaten like the farmhands  do,  biting on the soft flesh, unmindful of the juice flowing onto their cheeks and jaws.

I will allow the wildest of honeybees to build their hives in huge burnay jars near the house.  The honey will be spooned raw, after breakfast, to ward  away colds that may be caught while one naps under the clear moonlight.

It will take more years to  build, but I know  Palayupoy will become a neat example of an organic and sustainable farm.

I am slowly building my dream in the Ilocos.

Isak Denizen lived in Africa for 15 years, after which she returned to the salons  of Europe as the  Baroness Karen von Blixen, a celebrity in her day because of her farm in Africa.

I will be a simple farmer  in the Ilocos, happy with the fisherfolk and the farmhands who will help me continue to till the soil.

I will live part  of my life in Palayupoy, by the shores of Currimao, along the south China sea.

Palayupoy is open to guests.