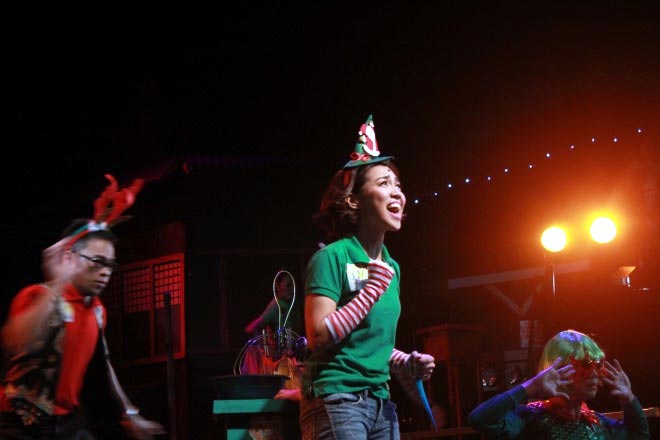 Aicelle Santos returns as Aileen the promodizer with a golden voice who dreams of making it big as YouTube sensation. CONTRIBUTED PHOTO/Peta

Flooded with requests for a rerun, ‘Rak of Aegis’ aims for 200th show

(UPDATE)–With 135 sold-out shows in 2014 plus the scheduled 60 this year, the Philippine Educational Theater Association’s (Peta) “Rak of Aegis” with an estimated total of 195 shows has become the longest running original Pilipino musical in contemporary theater history, or at least in the last 10 years.

If another five-show-per-weekend package would be added to accommodate the usual last-minute requests for an extension, it would be 200 shows or more.

It can be disputed that “Batang Rizal” and “Lola Basyang,” both original Peta productions like “Rak,” have more than a hundred shows each. But besides being categorized as plays for children and young adults, “Rizal” started in 2007 while “Basyang” in 2005.

If plans push through, “Rak” will have 200 shows all in less than two years’ time, making it the most successful.

Coming in at far second is Carlo Vergara’s “Zsa Zsa Zaturnahh Ze Muzical” with 91 shows (as confirmed by Vergara himself), followed by another Peta original, “Care Divas” with 87 shows.

Why such clamor for “Rak”?

“Because the audience always finds something new,” director Maribel Legarda on Wednesday told us at the jam-packed space turned performance hall near the lobby of the Peta Theater Center. On a makeshift stage were the cast members doing excerpts from “Rak” before a crowd composed of fellow actors, show buyers and members of the media.

“The actors keep on improvising their dialogues, their approach to their character so each show is different,” Legarda added.

“New” incidentally is something palpable this time. New members of the cast were introduced.

“I’m really excited to be part of the cast. When I watched it the first time I was really so envious that I wasn’t part of this production. It’s such a fun show and puro kalokohan which I really like,” Martinez told the INQUIRER in a later interview.

As a new kid in the neighborhood, does he feel any pressure?

“Meron konti kasi it’s a successful show and I have to be up at par with the rest of the cast. The good thing is that they are so warm and welcoming so it makes it easier. I always feel pressure with the shows I do. I think it’s a good thing because it keeps me on my toes and makes me work harder,” he added.

Martinez alternates with come-backing OJ Mariano. Earlier, it was announced that pop singer Renz Verano will play Kiel but as of Saturday last week, it turned out his schedule won’t permit him to rehearse and act full time.

As of posting, Leloi Arcete, head of Peta media affairs, told INQUIRER.net they are looking for another Kiel but if no one’s available or qualified, it’s Martinez and Mariano alternating for the 60 shows. “That would make them do 30 shows each,” she said.

Another addition to the cast is Lani Ligot (“Priscilla Queen of the Desert”). She alternates with comedian Kakai Bautista and Neomi Gonzales as Aileen’s mother Aling Mercy.

“New”—or at least in a musical at Peta—also translates to the 8 pm shows starting Tuesday and goes daily until Sunday while the 3 pm shows start Friday until Sunday. All in all, there are nine shows per week, squeezed in a two-month-long period. This will start on June 17 (not June 19 as earlier announced) until August 16, Sunday.

The clamor for a “Rak” rerun this year can also be explained by some loyal followers who are now show buyers themselves. One lady in the audience, who slipped away from the crowd so fast before we got a hold of her, confessed to everyone in the hall she saw “Rak” last year at least seven times. She saw the opportunity so she bought shows to sell to friends and foe alike.

She’s only one of the many. Even members of the cast like lead actress Aicelle Santos was one of the show buyers last year. Many have followed, no pun intended, her lead this year.

“Well so far 80 percent of the cast are show buyers and they help each other promote the show,” said Arcete.

Santos returns to play Aileen, the promodizer with the high-pitched golden voice who lives in a low-lying economically-challenged village called Barangay Venizia (in obvious reference to Venice). She hopes her songs uploaded on YouTube will be noticed by Ellen DeGeneres and thus, her and her family’s ticket to a better life.

“The play has become my training ground also as a singer,” Santos said. She added the cast has become like family already and the set has become like a clan gathering, a festive reunion. “That’s why I’m excited for the next run.”

“It’s the joy of singing the songs on stage. Then it grows on you. Even in the car while driving, at home, we sing the songs out of the blue,” said Nor Domingo, who returns to play Fernan the shrewd real-estate developer. He alternates with Julienne Mendoza (“Bona,” “EJ”) and Gie Onida.

This brings us to “Rak of Aegis” magic that is partly credited to the songs of now equally phenomenal pop rock band Aegis and their universal appeal. The band’s original songs “Basang-basa sa Ulan, ” “Halik,” “Luha”, among other hits have become favorites in videoke bars from Batanes to Tawi-Tawi.

Language barrier is no factor at all. Aguilos, another returning cast member, recounted her “patotoo” (testimonial).

“My husband is Italian and he barely understands Tagalog but he saw the musical eighteen times. Not eight but eighteen times. He told me he was laughing and singing all the time. He loved every minute he spent inside the theater,” Aguilos said.

Jerald Napoles returns to play Tolits the “gondolier-bangkero” love interest of Aileen. We asked him how excited he is, knowing it’s his fourth time in “Rak.”

“Always very excited. ‘Rak of Aegis’ is a gift to each and every cast. Daming blessings na dumating dahil sa sobrang appreciation ng tao sa palabas (So many blessings coming because of overwhelming appreciation of the people fro the show). Tsaka may mga ilang pasabog ngayon kaya naeexcite ako (Also, there are a lot of explosive surprises this time that’s why I am very excited),” Napoles said in a later interview.

So if you haven’t seen “Rak of Aegis,” you’re probably living under a rock… for ages.

The trip to Villa Venizia starts on June 17.