Cheering their way to the top | Lifestyle.INQ ❮ ❯ 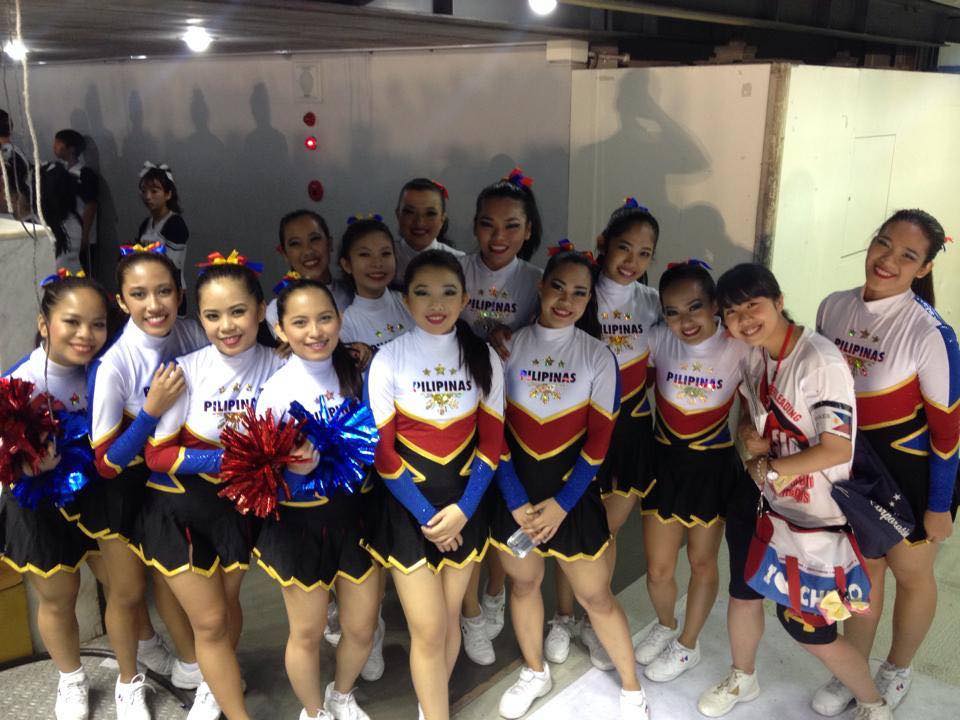 Cheering their way to the top

EARLY this year, at the WNCAA cheerleading competition, a group of girls clad in black, red and white eagerly took their places on the cheerleading mat, ready to perform the routine that they had been practicing for months.

The music started and the girls be- gan moving: jumping, tumbling, lift- ing and cheering their hearts out—with some girls even waving at their audience, which reciprocated their excitement with loud chants of “U-A-&-P!”

These girls—the UA&P Firestarters—were first runner-up this year. It came as no surprise, as over the years name for themselves in the Philippine cheerleading scene. The Firestarters are known particularly for their blazing dance routines with unique choreography and well synchronized steps. This, combined with the enthusiasm and raw energy of each performer, added up to a winning team.

The Firestarters have already bagged two championship wins at the WNCAA in 2012 and 2014. The team was also able to represent the country in Japan for the 8th Cheerleading Asia International Open Championships (CAIOC) under the Cheerleading All-Female and Group Stunts categories.

In addition, the Firestarters are also consistent podium-placers at the WCSA Cheerdance Competition, where they bagged silver in 2012, 2014 and 2015.

Their trademark flair on the dance floor as well as this steady stream of achievements have allowed the UA&P Firestarters to stand out, making them the team of choice for cheerdancing in the Philippines. As such, the Gymnastics Association of the Philippines (GAP) chose the UA&P Firestarters to represent the country in the CAIOC under the Cheerdance division, a category introduced for the first time this year.

Challenges
Of course, preparations for the competition weren’t easy. As soon as they were invited, the team faced the UA&P Firestarters in their Team Pilipinas uniforms last year challenge of having to gather enough members to join the competition. While the team initially had 12 members who signed up for the competition, four backed out due to budget constraints, leaving the team with only eight members—just enough to meet the minimum team requirement.

In addition, the girls had to raise enough funds to be able to compete. Many of the members had to use their own money. “Primarily, we had to shell out from our pockets,” said coach Ajjie Mendelebar. The team found ways to raise money, such as through solicitations from companies and local government units, as well as fund-raisers like garage-sale events. “We’re very fortunate to have supportive families and friends,” commented Mendelebar. Despite these challenges, the girl remained hopeful and found ways to make the most out of their experience. They decided to practice harder than ever, maximizing their limited training time.

“We only had about two weeks to come up with a routine, we had to be completely focused all the time and had to be quick in picking up the combinations of steps that our coach would teach us,” said member Pebbles Lahoz. This is much more difficult than their usual training schedule, which allowed them around two months to create and polish their routine.

This time constraint required the girls to amp up their training sessions in order to progress. According to Lahoz, “As a team, we started doing a bit more cardio to help with our endurance, and also focused more on flexibility and developing better technique.”

The girls have even taken to training in their own time. “When I’m not training with the team, I go to the gym and work on my skills. If not, then I at least work out to stay flexible,” said Maria Palabyab. Their small number, which was once a hindrance, eventually became their advantage. “Since we are only eight cheerleaders in this event, our coach was able to concentrate on each one of us,” said Maria Jimenez.

“It’s really a matter of bringing out the best in each of my cheerdancers. I had to make sure everyone will shine as they perform,” said Mendelebar.

Their coach believes the Firestarters, known for their one-of-a- kind routines, have a fighting chance in this competition. “This might be our first shot at cheerdancing in the international arena, but our experi- ences in previous competitions and rigorous training equipped us with everything that we need. We Filipinos are known for our power and grace. Matched with unique choreography that’s fun and entertaining, our routine will definitely stand out.”

In the end, the team knows these preparations for the competition mean more than simply bringing home a gold trophy after the trip. The girls put more importance on bring- ing pride to the country.
“Being able to represent the country gives us a heightened responsibility and an abundance of pride since we are given the opportunity to represent the dreams and hopes of our fellow countrymen,” said Ashley Barba.

“To have the opportunity to be ambassadors of Filipino pride is most definitely a huge honor, and it feels great to be carrying the name of both our school and our country,” added Lahoz.

For Mendelebar, it’s not about winning at all: “For as long as they leave their hearts out on the floor, it’s more than enough for me.”

The UA&P Firestarters will be competing at the Cheerdance division of the CAIOC today and tomorrow. The CAIOC, hosted by the Foundation of Japan Cheerleading Association, is a competition duly recognized by the Gymnastics Association of the Philip- pines, the Philippine Sports Commission and the Philippine Olympic Committee.