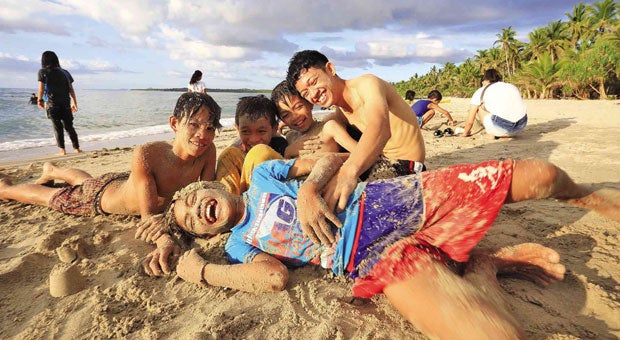 JUST LIKE BORACAY But without the congestion, the little-known treasure in Balud, Masbate, also boasts of a 10-km stretch of white sand beach with pristine waters only waist-deep even at 500 meters from the shore. MARC ALVIC ESPLANA/INQUIRER SOUTHERN LUZON

BALUD, Masbate, Philippines—It’s been there since anyone can remember, a 10-kilometer stretch of white beach in a secluded cove with a charming sunset kept secret by a range of rolling hills.

An hour-and-a-half drive from Masbate City, over a 68-km concrete road between grassy rolling uplands where grazing white Australian Brahmans look like marshmallows strewn over the hills, Palani Beach emerges only after negotiating another 2.5 km of rough dirt road.

The beach is located in Balud, a fifth-class municipality of 32 barangays on the southwestern tip of the Masbate peninsula that subsists on coconut farming and fishing in a land of large cattle ranches.

Palani’s sandy beach is wide and long enough to host a national beach football competition with 51 teams joining from different universities and football clubs in the country. The local government of Balud and the Filminera mining company sponsored the event that was held last April 16.

Palani Beach is a “paradise free from the blight of congestion in popular white-beach destinations,” said Willy Abesamis, the owner of the newly opened Paraiso del Palani resort.

Abesamis had spent years in Manila as a banking executive but retired because the atmosphere in the city made him sick.

Palani, he said, offered a contrast with its “healing” environment.

Abesamis and his partner, Grace Dalidad, own a 1.5-hectare beachfront property that they bought two years ago from relatives of Grace and developed into a resort. They held a “soft launch” for the resort on April 15, just as visitors were streaming into Masbate City for the Rodeo Festival.

It took about a year to clear the thickets on their beachfront property before Abesamis and Dalidad could start constructing accommodation facilities.

Abesamis, who often visited Boracay before it became the country’s most popular white beach, found Palani to resemble the Boracay of the time when it had not yet been overrun by revelers.

In fact, Boracay can be seen as a small dot facing Palani Beach to the east across the Jintotolo Channel that connects the Sibuyan and Visayan Seas. It takes three hours by pump boat to cross over from Palani to Boracay via the waters off Roxas City on Panay Island.

Palani Beach is “swimmer-friendly” since its sandy beach falls gradually to the sea, with the water only waist-deep even at 500 meters from the shoreline, according to Abesamis.

Families with children would have fun because of the long stretch of shallow water and white sand beach to romp in, he said.

On a full moon, the glistening waters dance off a swimmer’s body and the water is so clear that one can see one’s feet on the sandy bottom, said Dalida, who enjoys relaxing on a hammock tied to a talisay tree on the beach on moonlit nights.

As of now, Palani Beach has remained unspoiled because of its very remoteness.

But Abesamis foresees the need for owners of the new resorts sprouting on the beach to agree on the kind of structures to be built and to adopt a waste-disposal system to save the beach from pollution.

The government of Balud Mayor Ruben Jude Lim wants to promote Palani Beach into a top tourist destination, according to Emilio Abelita, a consultant to the mayor.

It was Abelita’s idea for Balud to host the national beach football competition where 500 participants played in the boys and girls’ under-17 events.

The participants came from Masbate, Negros Oriental, Albay and Boracay. There were also competitors from Manila schools like De La Salle University, Far Eastern University, University of Santo Tomas and Polytechnic University of the Philippines, and football clubs from various parts of the country.

Players Jay Saulog 9; Christian Bangayan, 14; and Gabriel Lauer, 10, were excited when they arrived at Palani Beach by boat on the afternoon of April 15.

“It is our first time here in Masbate and the more than five-hour travel is all worth it,” they said.

Saulog and Lauer played in the elementary category, while Bangayan competed in the under-17 category. All three represented Team Boracay.

Bangayan found Palani Beach to be so much like Boracay, except that Boracay “tends to be always crowded” while Palani “seems to be peaceful,” he said.

Abelita said the local government hoped to promote Palani by word of mouth and its hosting of the beach football event was the initial come-on for visitors.

The government is considering holding a competition with international participants next year, he said.

There are daily flights from Manila to Masbate City, from where buses, jeepneys and utility vans can be taken to Balud town, with fares ranging from P70 to P75 per person.

Ten kilometers before reaching the Balud town proper, there is an access road to the right of the national highway going to Palani Beach. Here habal-habal motorcycles can be hired for P30 per person to get to the beach.

For a more comfortable ride, a 10-passenger van can be rented from Masbate City for P4,000 (round trip).

The budget traveler could take the bus from Manila to Pilar, Sorsogon, where a fast craft to Masbate City leaves at 8 a.m., 10 a.m. and 12 noon daily. The fast-craft journey from Pilar takes one-and-a-half hour, compared to the three to four hours via the roll-on, roll-off (RoRo) vessel. With a report from Virn Ivy del Valle