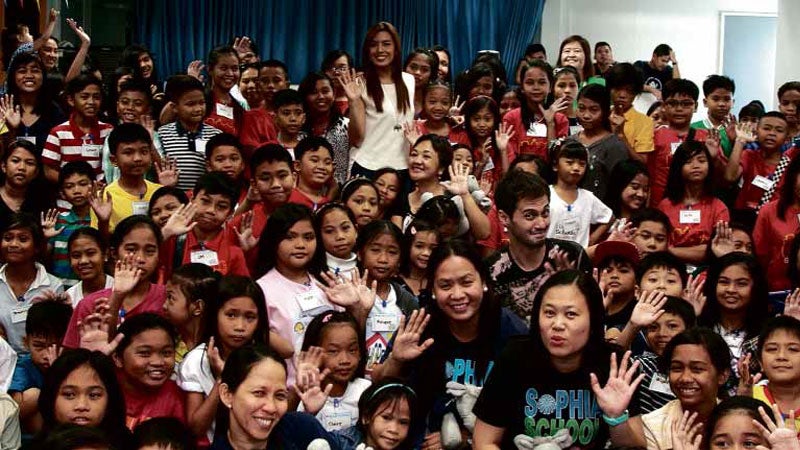 This was the message of Robert Munsch’s children’s book “Love You Forever,” which was read by singer Nikki Gil to more than 150 children at last Saturday’s Read-Along at the Inquirer office in Makati City.

The session was held in honor of Mother’s Day and to mark Inquirer Read-Along’s eighth anniversary.

Gil, a Read-Along ambassador, sang the lullaby portion of the story with several kids in the audience, many of whom were moved to tears. “I’ll love you forever/I’ll like you for always/As long as I’m living/my baby you’ll be,” so goes the lullaby.

The story tells of a mother’s devotion to her son through the years.

The children also listened to the story of a child who learns the importance of taking care of his things in Rebecca Añonuevo’s “Ang Bisikleta ni Momon,” as read by Sophia School teachers Salie Vilalluz, Doray Carable and Marnie Buenaagua. The tandem of Ang Pinoy Storytellers’ Rich Rodriguez and Adarna House’s Dyali Justo later read Rene Villanueva’s “Tiktaktok at Pikpakbum,” a story about siblings learning the value of sharing.

Read-Along first-time participant Jinros enjoyed “Love You Forever,” as the story inspired her to love her mother more. “Mama always gives me what I want,” she said. “On Mother’s Day, it’s my turn to give her lots of hugs and kisses.”

Jinros said she also learned the value of selflessness and generosity from the story “Tiktaktok and Pikpakbum.”

Marion, a Grade 3 student from Laura Vicuña and also a first-timer, admitted that he sometimes fought with his siblings. “We eventually reconcile, like the characters in Ate Dyali and Kuya Rich’s story,” he said.

Faith, 10, an incoming Grade 5 student at Paco Catholic School, said she could relate to the touching story read by Gil because it reminded her of her mother, whom she has not seen or talked to for nearly four years.

“I don’t even know where she is. I miss her so much,” said Faith, who said she read the story many times over.

The story is close to Gil’s heart as well, she said, as she is very close to her parents, especially her mom.

“Even before I read the story, I psyched myself up not to cry. While reading it, I saw the kids and even some of the teachers getting misty-eyed. So it was a challenge to keep it together,” Gil said.

At the end of her segment, she shared some of her favorite book titles with the kids.

“I love reading because it lets me travel without having to get on a plane,” Gil said to the kids, adding that she preferred paper books to e-books because she “loves the smell of the pages.”

The participants—students from Hands On Manila’s Galing Mo Kid (HOM-GMK) program and children from Virlanie Foundation, Laura Vicuña Foundation and St. Anthony of Makati Montessori School—got a lunch treat as well as backpacks with school supplies and a Jollibee party courtesy of information technology company Zendesk.

“It feels good to do something different. It was nice to see the kids actively participating in the storytelling. They were really attentive and did not get bored,” said Titan Manalastas, one of the volunteers from Zendesk.

“I wish the importance of reading would be inculcated in their minds. In this time of technology and computers, I wish reading would still be among their habits,” said Dondon Marquez of HOM, who helped bring the GMK kids to the session.

“On behalf of our kids from the GMK program, we would like to thank Inquirer Read-Along and Zendesk for giving an opportunity to our kids from the public schools. I know this experience will last in their minds,” Marquez said.

Galing Mo Kid, one of the programs of HOM, is a mentoring program for high achievers in public schools. HOM volunteers tutor “high achievers” from four schools, with each school having 30 children from grades 4 to 6.

“We want to maximize their potential. Usually, most of the outreach programs in public schools are directed toward slow learners or to address malnutrition. Those who are high achievers are left behind. We want to reach out to them too,” said Marquez.

A thank-you ceremony for the first batch of Read-Along ambassadors and a welcome ceremony for the new set will be held at the Inquirer office on May 13 as part of the program’s anniversary celebration.

As Read-Along ambassadors, Gil and company led Inquirer storytelling sessions and the program’s festivals held at the Cultural Center of the Philippines.

Launched in 2013, the Read-Along ambassadors program taps celebrities to be role models and youth influencers who promote reading among the youth through their participation in read-along sessions.

The ambassadors’ oath: To share in the advocacy to promote love for reading and in the belief that reading is at the core of learning.

For its advocacy, Read-Along has been honored here and abroad. In 2013, it won the silver award of the World Young Reader Prize given by the World Association of Newspapers and News Publishers. In 2011, it was declared overall grand winner in the communication management division of the 10th Philippine Quill Awards for staging 25 simultaneous storytelling sessions across the country on Dec. 4, 2010.

The program has been recognized by the National Commission for Culture and the Arts and the Reading Association of the Philippines.