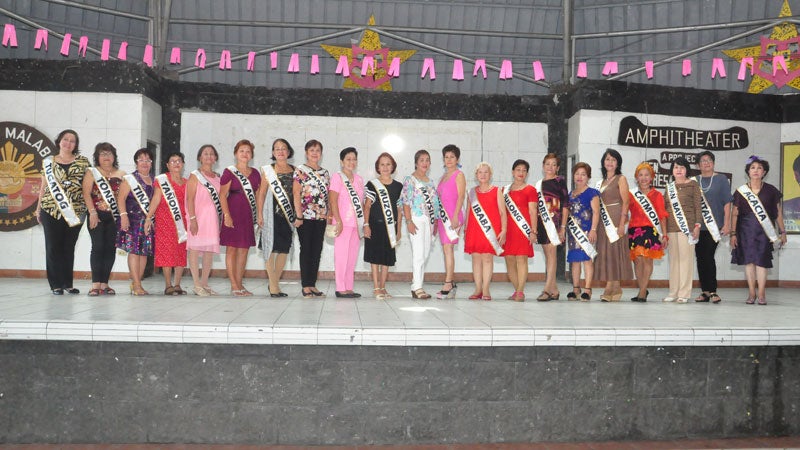 MANILA, Philippines–Who says beauty pageants are only for “the young and the beautiful?”

The lola (grandmothers) of Malabon City are out to prove that wisdom comes with age and real beauty never fades.

Twenty-one women between 60 and 80 years old are vying for the title “GrandmaMalabon.”

Like any other pageant, it has a question and answer portion, a talent showdown and a “Best in Evening Gown” competition.

But no grandma is going home with the “Best in Swimwear” title.

“No swimsuit. God forbid,” Melissa Sison-Oreta, Malabon City’s first lady, said in an interview after the presentation of the candidates on Monday.

“It’s not to make fun of grandmas but to glorify them because we can learn a lot from them,” said Oreta, who conceptualized the pageant.

Contestants will not be judged based on “beauty” alone but on character, too, she said.

The judges will grade the contestants on the May 21 coronation night according to these criteria: 40 percent for physical beauty or personality, 40 percent for tact, wit and sensibility, and 20 percent for stage presence and overall impact.

The city government replaced the “Mutya ng Malabon” contest with “GrandmaMalabon” to highlight the role of the family’s “matriarch.”

“I’m a positive thinker so go! go! go! And frankly speaking, I have the poise, you might say,” said the 64-year-old, who stands 5 feet and 3 inches tall and weighs 58 kilograms.

The proud grandmother of six and mother of five barangay league basketball players and a gay was able to maintain her statuesque figure because of dancing.

Simms plans to dance the “singkil” for the talent showdown on May 16 at the Malabon City Square.

“I’ll ride on a bamboo,” she eagerly said.

Zumba is her secret

Another standout is former model Rebecca Tayag of Barangay Longos, whose wrinkle-free face and slim body make it hard to believe she’s 64.

Tayag’s secret is attending Zumba sessions as well as maintaining a proper diet, which includes red rice and fish. At night, she only eats wheat bread.

“She doesn’t take any medication,” her daughter Emma Crisostomo said.

At first, Crisostomo said she didn’t want her mother to join the contest but now the whole family is behind her after learning that “it’s not her body that she will be exposing but how she sets a good example.”

“She taught me how to be strong,” she added.

For Barangay Catmon’s Adoracion Dalisay, it’s not all about what the “naked eye” can see but the wisdom she has gained as an elementary public school teacher for 36 years and as a single mom of five children.

Dalisay’s husband died when her youngest was 3 years old and her eldest was 16 so she had to work day and night. Aside from her day job as a teacher, she offers tutorial services and delivers candies to sari-sari stores to support her kids.

“I want to be an example to younger women,” said the 72-year-old grandmother of 17 children, whose spunk and humor was evident throughout the interview.

Dalisay, sporting an orange-colored hair and wearing an orange blouse and a bloomer skirt with flowers and orange lace, was among those who drew laughter from the organizers because of her funny antics and exaggerated moves.

Unlike the other candidates who were chosen by barangay captains, Dalisay volunteered to represent their village.

“I joined the contest because life for senior citizens is very short, right? Tomorrow is no longer a promise. Tomorrow might not come anymore so you take all the chances and do the best,” she said.

Dalisay, president of Pinagbuklod ng Samahang Senior Citizen ng Catmon, doesn’t treat the pageant as a competition but a way of fostering camaraderie.

“One for all, all for one. No one gets left behind. Just do the best and God will do the rest,” she said.

The GrandmaMalabon winner will bring home P15,000 in cash and a sari-sari store showcase worth P10,000, apart from the sash, crown, bouquet and trophy that go with the winner.

Minor awards include Ms. Congeniality, Ms. Photogenic, Best in Evening Gown, Best in Talent and Most Facebook “likes.” Recipients of these awards will receive P2,000 each.–With a report from Eumarie Penafuerte

From matron to elderly

Because I am a grandmother