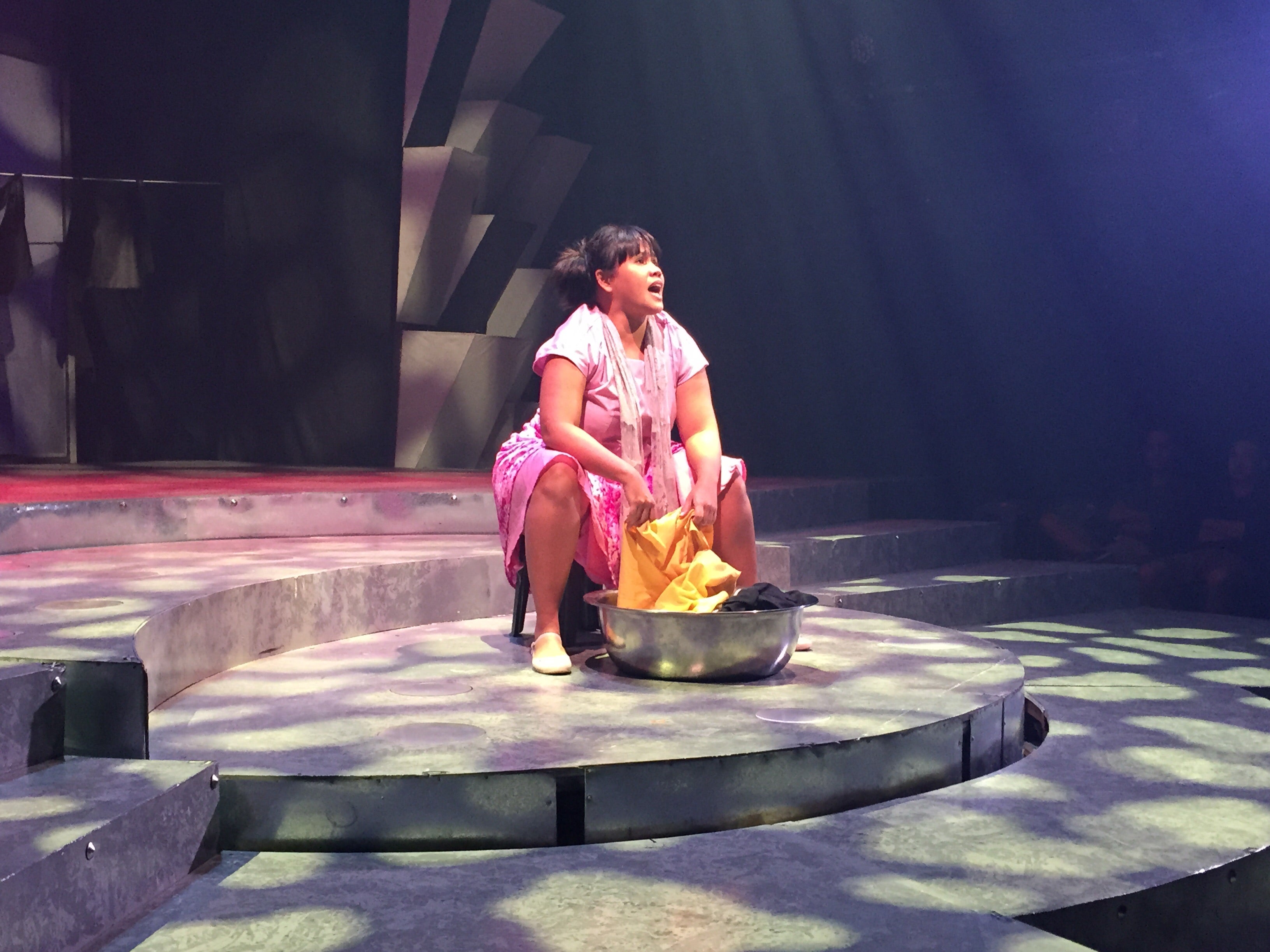 Loosely translated “everything in you is big,” this line got stuck in our mind long after the actual experience is gone.

We can go on saying it came from Bituin Escalante, delivered in her taunting, haunting mode the way she does the blues and acid jazz. It also came from Frenchie Dy, spoken in a unique, meek, innocent, disarming style it felt like M&M chocolate candies melting in the mouth.

But we’re neither Markki Stroem nor Hans Eckstein and we’re getting ahead of the story.

Throw in the imports Stroem and Eckstein.

Fronted by a muse with a glittering sash and delicately hand-sewn letters that read, “the musical that will end all musicals,” it’s touted to be the next big thing in musical theater.

Easy to believe, if we think about it, considering the same minds created “Zsa Zsa Zaturnnah Ze Muzical” or at least a combination of those brains behind “Care Divas” and “Sa Wakas”—three of the most successful original Pilipino musicals in the past decade.

It is a love story about a lady house help named Mely Moran (Escalante, Dy) and her superhero master Leading Man (Stroem, Eckstein). It is also about sibling rivalry, between sisters Mely and Viva (Kim Molina, Natasha Cabrera) driven by ambition with different sets of morality. It could be about colonial mentality and why broken, ungrammatical English is funny. So what else is new?

To put it simpler, think of The Avengers in a Philippine setting. They all live in one big compound and everything’s in disarray because they’re all so busy saving people from criminals and natural disasters. They barely have time to wash the dishes or even their own underwears. They hire a Filipino maid. Conflict happens when one day, Iron Man or Thor or Captain America falls in love with Inday.

More troubles came when Inday’s younger and envious sister makes an unannounced visit. It turns out she’s more than a visitor but a secret agent sent by Loki and the others from the dark side.

Of course Vergara’s version is funnier and closer to our Zsa Zsa Zaturnnah sensibility. How Vergara fleshed out an originally 45-minute long one-act play into a three-hour musical is something that aspiring playwrights would want to learn from.

And yes, if there’s one major interesting come-on in this musical, it’s having a peek on how a creative writer’s mind works.

Graphic novelist turned playwright Carlo Vergara wrote “Leading Lady” as a one-act straight play for the Virgin Labfest in 2013 at the Cultural Center of the Philippines. Virgin Labfest is an annual festival of untested, untried, unpublished, unproduced works of aspiring playwrights.

“Leading Lady” was one of the best three plays chosen for re-staging the following year. Though it has been a tradition in the Labfest, then on its 9th year, to restage three plays in a set called “Revisited,” the batch where “Leading Lady” belonged was something for the books.

The other play was Herlyn Alegre’s “Imbisibol,” which was fleshed out into an eponymously titled full-length film that won best picture in this year’s first Sinag Maynila Independent Film Festival. Both the play and film were directed by Lawrence Fajardo.

The other was Liza Magtoto’s “Isang Daan.” Incidentally Magtoto is the same playwright behind the phenomenal “Rak of Aegis”.

As the story goes, Vergara sought the help of Perterean Briñas, one of the producers from Dalanghita.

“He helped me jumpstart the writing process, so I believe around 15 percent of the script is his, mostly in the first act,” Vergara told INQUIRER.net Tuesday in an online interview.

Now for the musical, only Eckstein was retained because we’ve learned from a reliable source, he’s the only one who can sing among them.

For those who saw the Virgin Labfest version but haven’t seen the musical, how and where Vergara placed the story from the one-act is akin to the thrill of waiting for Pacquiao landing a solid punch on Mayweather’s mouth.

Vergara’s words were set into music by Vincent de Jesus (no relation to the author), perhaps the most brilliant and prolific composer-musician of today since Levi Celerio.

Here, De Jesus is composer, lyricist and musical director. Never mind the haunting “Himala the Musical” and the Jean Luc Godard-like opus “Juan Tamad, Ang Diyablo at and Limang Milyong Boto” which many consider as his best works but how he combined broadway, pop, jazz, rock and kundiman in “Leading Lady” is also something that music majors would want to write a thesis on someday.

At first, we’d like to believe this young genius of a composer Ejay Yatco as assistant musical director had inputs in taming De Jesus’s tendency to turn the musical into a slash-your-wrist songfest.

“Vince de Jesus composed all the songs. I just made the arrangement of vocals for ensemble and wrote his songs in score form,” Yatco told us Tuesday in an online interview.

Yatco came into our consciousness via “Sa Wakas,” the breakthrough rock musical in 2013 featuring the hits of the defunct rock band Sugarfree.

We wonder what if Yatco were given more freehand in writing, composing and re-arranging some songs in the crucial scenes. For example (spoiler alert), when Mely cries over the nearly lifeless body of Leading Man, it sounds like she’s about to commit suicide and not live and avenge for her misfortune.

A Yatco touch could have make it a bit lively, a song of a little hope not pure despair. (Then again, a gay friend of mine who I will hide under the name Philip told me he shed tears in this scene.)

Director Chris Martinez may be known for his films (“Kimmy Dora” series, “Ang Babae Sa Septic Tank,” “I Do Bidoo Bidoo”) but in his younger and more creative years, he wrote the now legendary semi-biographical play “Last Order Sa Penguin.”

As director of “Leading Lady,” he makes sure every actor, even those part of the ensemble, has his or her moment.

We thought the scientist Henyotic (Vince Lim, Mikoy Morales) is just a minor member of the KayumangGilas, the group of supervillains lead by the deliberately neurotic Senyor Blangko (Nar Cabico, Domi Espejo).

But when Henyotic and the imprisoned Viva had a scene together and he sings a ballad to voice out his good-guy sentiments, only then we learned he’s a major player in the musical.

Another surprise is Nena Babushka’s (Ocampo) moment when she tries to revive—spoiler alert—Leading Man. Ocampo’s highly engaging voice transforms what could have been a slash-your-neck song into an aria.

There were times when it felt like the stage is too small for such a big cast. During the fight scenes among members of Fuwerza Filipinas (the good guys) and the KayumangGilas with the ensemble dancing in the background, it felt like the actors were about to slip or fall off the stage.

So what if some of them actually fight at the aisles or in other strategic portions in the audience area?

So what if Bazooka Man (Flores) or Windang Woman (Borromeo) falls down—spoiler alert—and lays “dying” on an audience member’s lap? Could that be funny and surreal at the same time?

“Leading Lady” tries to weave fantasy into everyday life in a medium—musical—already twice removed from reality. It’s like reliving the graphic novel character we always want to be or the fantastic world in our childhood in the present.

Who cares about reality anyway. We’ve had too much of it outside the theater.

As for the length, my gay friend Philip hates musicals like a heartbreak but he finished it and told his friends he didn’t even notice it’s three hours long.

The production company, the actors, the people behind the stage, all the names involved, even the audience laughing all the way, yes everything in “Leading Lady” is “Malaki.”

Try to catch it on weekends till June 7.