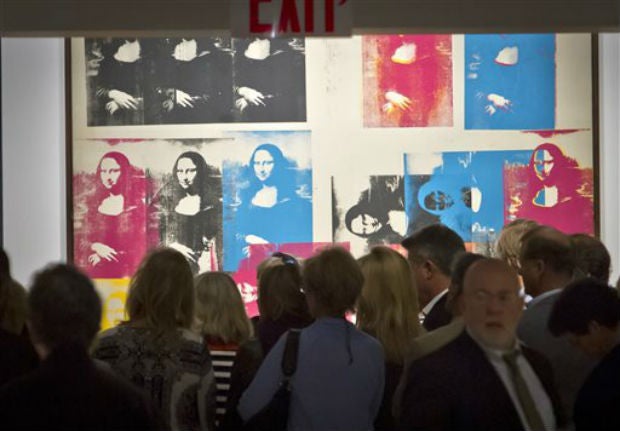 Christie’s evening sale featured Freud’s “Benefits Supervisor Resting,” which is considered one of the British artist’s most celebrated works. It depicts the ample figure of a reclining woman, every fold, curve and blemish of her naked form revealed. It sold for $56.2 million, including buyer’s premium.

Another painting from the series, “Benefits Supervisor Sleeping,” brought $33.6 million at Christie’s in 2008. At the time, it was the most expensive painting by a living artist sold at auction. Freud died in 2011.

Another painting of a nude, this one by Bacon, sold for $47.8 million. “Portrait of Henrietta Moraes” depicts a seductive nude of the artist’s close friend and model reclining on a mattress. It has been in the same private collection for nearly 30 years. It was created in 1963, the same year of the artist’s retrospective at London’s Tate Gallery and Bacon’s first major American exhibition at New York’s Guggenheim Museum.

Cy Twombly’s “Untitled,” an abstract work created in 1969 with oil-based house paint, wax crayon and lead pencil, sold for $42.7 million. An untitled work from 1970 last year set a record for the artist when it sold for $69.6 million at Christie’s.

Another work that created excitement was Andy Warhol’s 1963 large-scale silkscreen, “Colored Mona Lisa.” Exhibited in many major exhibitions, it also sold for $56.2 million.

Works by Willem de Kooning, Martin Kippenberger, Franz Kline and Jean-Michel Basquiat and others also were up for sale.