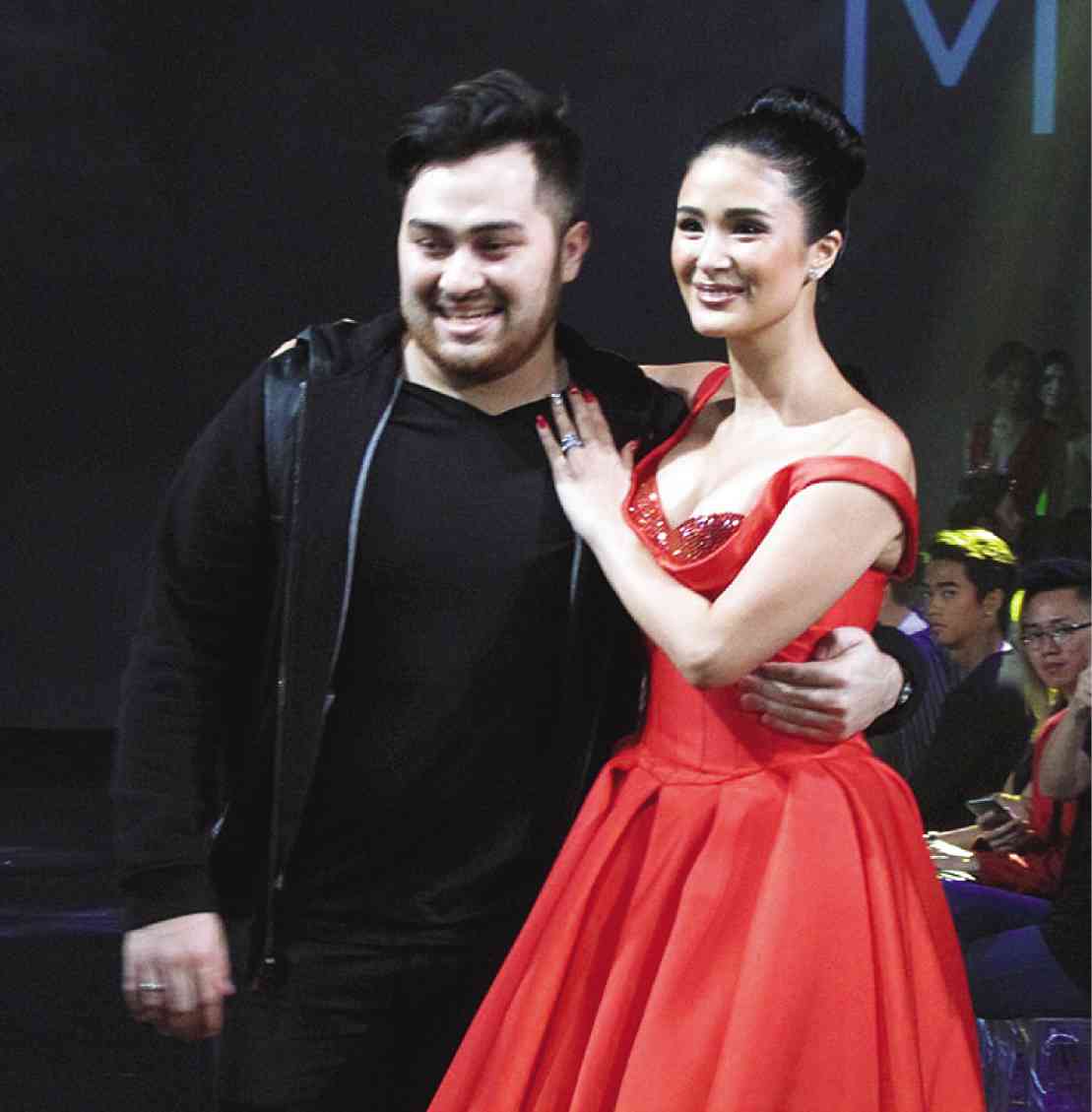 MARK Bumgarner with his muse, actress Heart Evangelista-Escudero, at the the finale of his F/W 2015 presentation for Manila Fashion Festival

When Mark Bumgarner began designing clothes, nobody took him seriously. His family thought it was just a phase.

Bumgarner, who recently turned 24, couldn’t blame his then-doubters. His recent past, after all, involved clubbing and parties, his young life spent in the competitive world of motorsport racing, and that life took a sharp and sudden turn.

When you Google Bumgarner’s name, “Formula racer” and “fashion designer” turn up. He is one and the same person. Now he’s also the relative unknown who has become Heart Evangelista’s favorite designer, who had the enviable job of making the reception dress for her high-profile wedding, and those of her entourage.

Bumgarner, who was born and raised in the Philippines with his three older sisters to an American dad and a Filipino mom, returned to the country in 2011, age 20, after spending his teens as an auto sport racer in Europe, the United States and Canada.

Throughout his career, which began at age 6, he amassed over 350 trophies from both kart and Formula racing, but it had become difficult to get sponsorships from Philippine companies. He decided to come home and take a break.

“It was no longer financially viable to be supporting two racers in the family,” he said. (His sister Michele still races.)

During this lull in his adult life, Bumgarner’s interest in fashion was sparked. He hung out with creative types—fashion stylists, show directors—at the parties he would go to almost every night.

His fashion background was practically nil, apart from being exposed to Italian fashion and high-end labels from age 15 when he lived in Italy.

“In 2012, I became part of a styling team for a denim brand,” he said. “It was during this time when I was surrounded by a very creative group of people that I decided to try my luck in this industry. After the gig, I developed my first collection.”

Bumgarner was largely self-taught. He had no mentors; he had no fashion-designer friends.

“I used to have a seamstress who has her own shop, and I would spend many sleepless nights in her shop. Sometimes I would sleep on her couch so we could finish a dress. Looking back, I realize I had a very difficult start but it also pushed me to learn the tricks of the trade.”

His persistence began to pay off less than a year ago when celebrity stylist Kat Cruz-Villanueva introduced him to Evangelista, who needed a white dress for the launch of a beauty brand the actress was endorsing. The budding designer and the popular actress hit it off. Today, he makes most of her dresses—from simple everyday dresses to special-occasion gowns.

“He’s very talented,” the actress said of Bumgarner. “He’s not afraid. He’ll gamble everything just to get the right fit. He’s willing to experiment and is open to new things. He has perfected the basics. I’ve never met a designer who perfected the corset just the way I like it. With that foundation, you can do anything.”

Apart from the actress, Bumgarner had an early confidence boost from his first paying client, the real-estate bigwig Terry Madrigal, a family friend, for whom he made a gown. TV personality Maggie Wilson is also a regular client.

Bumgarner’s clothes have soft, fluid lines, and are decidedly feminine and romantic, no more evident than in his Fall-Winter 2015 collection, dressy formals in a dreamy palette of pinks and reds, with hums of white, yellow and gray.

Last year, Bumgarner flew to London to take up short courses at Central Saint Martins—“Creating New Concepts in Fashion,” and “Fashion Design and Marketing.” He felt that those are what he needed to learn at this stage in his business, more than the technicalities of making a garment.

Despite their initial doubts, his parents have thrown their support behind him. His mom, he said, is his biggest fan. He runs his own business from his atelier in Parañaque, where he has a staff of 12 and a secretary. He hopes to move to Makati this year to be more accessible to clients. (For appointments, call Charmaine at 0917-5219938.; Facebook: Mark Bumgarner Manila, Instagram: MarkBumgarner.)

“Racing is different, for it is very, very physically demanding,” the ex-racer said. “It is also one of the most dangerous sports in the world. I have, in fact, broken a few bones from racing.

“Fashion, on the other hand, has a different kind of euphoria—meeting clients and deadlines, coming up with new ideas, material sourcing. Both fields are similar in terms of personal triumphs and challenges.”

The newcomer is unsure if the industry is now ready to welcome him with open arms. “Half and half… [but] I believe there’s always room in this industry for someone who has the drive to pursue a dream, and, of course, for someone who makes beautiful clothes,” he said.

“The most challenging for me was getting my name out there. It was not a very easy transition from sports to fashion. But I have a dream and a vision.”

For now, that is his checkered flag.