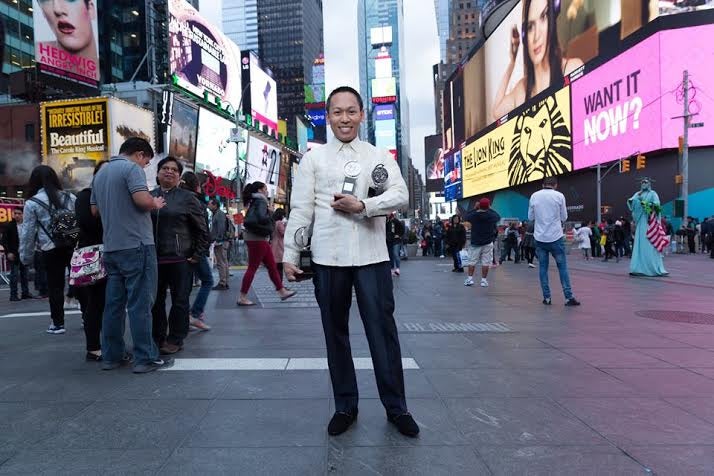 Jhett Tolentino in Times Square with his Tony trophies. PHOTO BY JHETT TOLENTINO

Jhett Tolentino has just added two more Tony Award nominations to his name—Best Play for “Hand to God” (still running), and Best Revival of a Play for “This Is Our Youth” (which ran from September 2014 to January this year).

No, he’s neither an actor in the cast nor a part of the artistic team. He and his business partner Joan Raffe, through their company JoanJhett Productions, served as coproducers for these two productions.

More and more Broadway (and Off-Broadway) productions now accept investors who are given the privilege of being named producers in the billing; as such, they also get the honor to go up the stage to receive the award if and when their show wins.

Tolentino and Raffe’s Broadway investments have won them Tonys before. Last year, they won Best Revival of a Play for “A Raisin in the Sun,” starring Denzel Washington, and Best Musical for “A Gentleman’s Guide to Love and Murder.”

The Antoinette Perry Award for Excellence in Theatre (Tony Award) honors theater professionals for distinguished achievement on Broadway. It was founded by the Broadway League and the American Theatre Wing, after whose cofounder the award is named after.

From Iloilo to NYC

Born and raised in Iloilo, Tolentino moved to New York in 2004; he was then 25 years old.

“After working in accounting for five years, I had had enough of the 9-to-5  life,” he says. He shifted to serving as a personal assistant and ended up being employed by Raffe, who would accompany him to Manhattan when he’d watch shows.

“My solitude took me to the theater while working in New York. I like taking my mind off things. I go in, lights out and I get entertained. I get to think, laugh, cry and sometimes get annoyed. I have many opinions on how a show should have been done in certain parts or how it should have ended,” he says.

He blogged about his opinions until “I realized that my writing hurt some people in the business. That wasn’t my intention. I just wanted to save my readers time and money. So I took down my blog and explored how to be a part of the industry without hurting people. And that was my entry to producing.”

With Tolentino and Raffe’s mutual love for theater, her finances and his eye for potentially popular shows and accounting background, the idea to become producers was floated to them by professionals from the industry.

“Producing is a very expensive gamble. I don’t have that kind of money. I have a little but not enough to stand on my own. That’s where Joan comes in,” says Tolentino.

They started investing in shows around 2011 and debuted as billed producers by late 2012.

In 2013, they invested in the comedy “Vanya and Sonia and Masha and Spike,” and before the year ended, they’d won their first Tony for Best Play.

“We formed our company JoanJhett Productions in January 2014. Now we can properly charge our traveling expenses!” he says, laughing.

He has three criteria in selecting shows to invest in. “One, I have to love it. Not like, dapat love! And after seeing over 1,200 shows, it takes a lot for me to love a show.

“Two, potential for critical acclaim or awards. Critics may no longer make hit shows nowadays, but the industry insiders still recognize their importance since they can shut down a show with bad reviews. When you have positive reviews from critics, then you will have potential awards recognition. That is important to both the show and the actors.

“Three, is it commercial enough? As a commercial producer, this is very important. A show shouldn’t only have quality but must be viable enough to tour outside of New York.”

Most importantly, “I always study a show’s production costs and recoupment charts.”

While he and Raffe have come in early (and with high enough an investment) in some productions to potentially receive a better profit-sharing deal and to be given the privilege to be part of the decision-making process in a show’s development, “there have been a few instances that we took the back seat and let other producers decide and take the lead. Trust me, you wouldn’t want to put on a multimillion-dollar show’s success or failure on your shoulders. It’s a lot to take on!”

Nonetheless, he always gets his hands dirty.

“Every show hires advertising and publicity for print, radio, online and event TV sometimes. There are sales and promotions firms to guide us throughout the process. But no matter how big the production or how little my involvement in any show, I personally help in reaching out to our target audience.”

He promotes shows by rallying the Fil-Am community to come watch them through word of mouth and through his social media accounts.

Seems like they know how to pick ’em, since the productions they’ve invested in have won several Drama Desk, Drama League, Outer Critics Circle, Lucille Lortel and Off Broadway Alliance awards.

Tolentino now travels to other US cities to scout for regionally-created productions that they can possibly bring to Broadway.

“Whenever there is a buzz about a Broadway transfer, believe me, we will be there in the next few days or a week, the latest.”

The momentum has been steadily gaining for the pair. From Broadway to, well, the world: He and Raffe have invested in productions that have toured internationally, such as the musical about Imelda Marcos, “Here Lies Love,” for its West End tour that starred Mark Bautista in the role of
Ferdinand Marcos.

All that passion and hard work have garnered him an Outstanding Filipino Americans of New York award in the Entertainment category  last year.

“Broadway is never too big for anyone. If anyone is aspiring to be a Broadway producer or any part of the creative team, I would encourage them to go for it. Never give up on it. There’ll be challenges and it may take a while, but you’ll get there.”