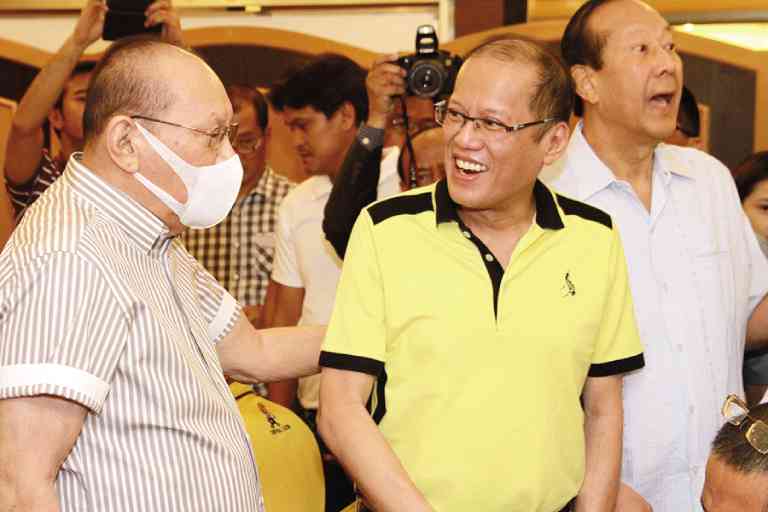 PRESIDENT Aquino says hello to his uncles Danding and and the late Henry Cojuangco.

Danding Cojuangco: I made the right decisions

Without a college degree, businessman Eduardo “Danding” M. Cojuangco Jr. sees himself as technically the least qualified person for any position in any of his companies.

“Had I taken up, say, accounting, I’d have been aware of all the pitfalls of entrepreneurship and been too scared to venture into anything,” he said.

Yet, in this one lifetime, according to Tarlac historian (and his friend) Ver Buan, Cojuangco has served as director in some 50 companies. Since 1983, he has been chair of food and infrastructure conglomerate San Miguel Corp., and is the newly elected chair of Petron Corp., the country’s largest oil-refining company.

Over lunch at Fortune, his favorite Chinese restaurant in Tarlac City, Cojuangco charmed guests at his table with his candor.

“I’ve led a full life—full of controversies,” he said, chuckling. (He would later whisper a request to this writer, to please make no references to his personal life.)

Since his kidney transplant in December 2013, Cojuangco has taken to wearing a mask in crowded places. “I could pick up an infection very easily, on account of the anti-rejection pills,” he explained.

He is on a strict diet and has lost considerable weight. “They are controlling my diabetes very well. I’ve always been a bad boy when it comes to sweets,” he confessed. Still, he seemed to enjoy the sumptuous lunch.

The enigmatic tycoon turns 80 in June, but he would rather mark what he feels are more important milestones—the Eduardo Cojuangco Foundation’s (ECF) 30th anniversary and the launch of Project Hope. The latter aims to teach technical, vocational and entrepreneurial skills to Tarlac’s out-of-school youth and unemployed young adults, and to provide them with job opportunities.

Cojuangco recalled that his 75th birth anniversary coincided with ECF’s 25th and the takeoff of Project Free, a program that gave scholarships to 2,000 public school teachers. The beneficiaries enrolled in masters’ or doctorate programs at the Tarlac State University under the guidance of De La Salle University (DLSU) and finished with DLSU diplomas.

“I’m a believer in education as the best way to alleviate poverty.  Even if you build classrooms, if the teachers are not capable of imparting knowledge effectively to the students, you don’t gain much more than aesthetics,” said Cojuangco.

La Salle is his alma mater. When school officials told him about its Department of Education’s (DepEd) Alternative Learning System, a nonformal curriculum for the underprivileged, the philanthropist saw beyond the written goals. “I thought it was a good program, taking out-of-school youth into the flow of the academe. And then what? Would that improve their lives? Not much, I think, if they have nothing to do after that,” he said.

He pointed out that the average monthly salary of a fresh college graduate would range from P10,000 to P20,000 while a backhoe operator’s started at P40,000. “We should change our attitude toward vocational education. We need people with these skills. If you send them abroad, jobs with good salaries will be waiting for them. In the United States, the  ‘dirtier’ the job, the higher the salary.”

ECF has sought partnership with several institutions for Project Hope. According to managing director Joaquin Henson, ECF, along with the provincial government and the Technical Education and Skills Development Authority (Tesda), will provide 12 learning centers for technical and vocational training.

The DepEd will identify the first 1,000 beneficiaries from 511 barangays in Tarlac. La Salle Green Hills will handle values formation training for the teachers.

When the participants graduate, Tesda, the Department of Labor and Employment and the local government will locate jobs to match their skills.

From the initial 1,000 students, ECF estimates it will have trained a total of 5,000 in five years.

At the lunch gathering, Cojuangco delivered an impassioned speech entirely in Tagalog, saying that hopefully no youth will ever be out of school because he is a Tarlaqueño. He then offered 200 slots for chemical engineers in Petron.

Project Hope partners gathered to sign the memorandum of agreement. But before they did, President Benigno Aquino III, Cojuangco’s nephew, walked in to greet him from another function room to celebrate the turnover of a building donated by the Philippine Amusement and Gaming Corp. to Tarlac National High School.

In the past, Cojuangco’s acts of kindness were often perceived as constituting political patronage. He repeatedly stressed that Project Hope is devoid of any such agenda.
“I don’t want this program to be associated with politics,” he said. “I’m doing this as payback for all the loyalty and help that the people of this province have extended to me.”

In Tarlac, Cojuangco is respected and fondly called “Boss.” Among the prominent members of his clan, he noted, he had spent the most time in Tarlac.

Cojuangco was born June 10, 1935, in Paniqui to a landed family. He remembers growing up in an idyllic setting, Barangay Apulid, and walking from barrio to barrio with farm workers’ children who were his playmates.

His father, Eduardo Sr., was a kind landlord. As Tarlac governor in 1941, Eduardo Sr. refused to ally himself with the Japanese, avoiding the invaders by frequently changing residences.

Because he had to move in and out of schools, the young Danding couldn’t get a solid education.
When he was a high school freshman in Ateneo, he couldn’t read properly, much less cope in other subjects. The constant embarrassment and feeling of inadequacy made him sick every morning.

Upon the advice of a priest, Danding was given a tutor. He passed the entrance exams in De La Salle High School and was in the honors list for the first two grading periods.

But, like most boys, he promptly fell into a barkada and coasted along with the lowest passing marks.

Still, to this day, Cojuangco acknowledges La Salle for giving him what he considers a well-rounded education.

Eduardo Sr. died of kidney failure in 1952 at age 49. Danding, barely 17, studied briefly at the University of the Philippines Los Baños, then enrolled in a two-year program in field crops and agriculture at the California Polytechnic University in San Luis Obispo.

Upon his return, Cojuangco took over his father’s business, the debt-ridden International Hardwood, which produced plywood and toilet paper. “As the eldest, I tried to preserve what my father had started. After a few years I told my mother that we had no more debts, but that she should consider selling the company. In the end, we would be blamed for floods, for cutting down the trees,” he recalled.

With a bank loan, he established Northern Cement Corp. in Pangasinan, of which he is still chair. Tarlac historian Buan writes that Cojuangco’s other businesses involved manufacturing, food and beverage, agriculture, edible oil processing, private banking, storage, and international commerce.

“Whatever I have now, I did not inherit; I worked for all of it,” said Cojuangco.

In the mid-’60s, then Senate President Ferdinand Marcos urged Cojuangco to join his Nacionalista Party in the 1965 elections. He ran for congressman against estranged cousin Jose “Peping” Cojuangco Jr. but lost.

Eventually, Cojuangco was elected Tarlac governor and served from 1967 to 1969. From 1969 to 1972, he finally served as congressman. “It’s easier to be a congressman. Madaldal ka lang sa Kongreso, magdala ka lang ng pork barrel, ayos na. Bilang gubernador, kailangan magpakita ka, hindi lang diskurso. (You just gab in Congress, then bring out the pork barrel and you’re made. As governor, you have to show concrete achievements, not discourses.) I’d rather be governor.”

Today, Cojuangco continues the work of development in the private sector and through his philanthropy. “In all my companies, I try to be a governor. I hope that’s a good analogy.”

Asked how he thought he came to head several companies despite not having a diploma, he replied, “One at a time. I made the right decisions in acquiring these companies that no one thought could be acquired.”

Though he acknowledges that it’s a cliché, he is prone to saying he is successful because “somebody up there likes me. I am blessed. I have shortcomings, but I’ve always tried to be a good Christian.”

Famed for his decisiveness and risk-taking, Cojuangco always considered failure a part of success. “You lose some, you win some,” he said. “You have to take both.”