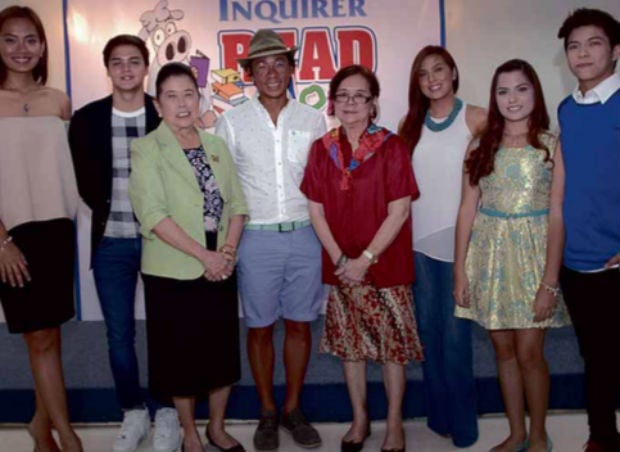 The new ambassadors who vowed to share their love of books with children are teen screen partners Nash Aguas and Alexa Ilacad of television network ABS-CBN and young actor Mark Neumann of T V5.

The three were invited by the Inquirer to promote the joy of reading after their engaging storytelling in Read-Along sessions last year.

Aguas and Ilacad were the celebrity readers in February last year while Neumann was a guest storyteller at 2014’s Read-Along Festival at the Cultural Center of the Philippines and in a special session in Meycauayan, Bulacan, earlier this year.

Renewing their oaths as ambassadors were television host Kim Atienza, singer Nikki Gil and newscaster Cathy Untalan-Vital, who were featured readers in the past two Read-Along Festivals.

“Your presence today is testimony that we share the same goal of inculcating the love of reading among the young and breed a nation of readers,” said Inquirer chair Marixi Prieto, who graced the occasion on behalf of Read-Along ambassador and Inquirer president and chief executive officer Sandy Prieto-Romualdez.

“Read-Along has come so far. I would like to acknowledge the effort of the Read-Along team, and of course all of you, our ambassadors, and all the kids who have come to the Read-Along for the past eight years,” said Inquirer editor in chief Letty Jimenez-Magsanoc, who gave an inspirational message during the event.

Neumann, who admitted having difficulty reading stories in Filipino, said his “twisted Tagalog” was no hindrance during the activity.

“I believe that if you want to tell them something, whatever language it is and in whatever way, it can still be done,” Neumann said.

Ilacad, for her part, said she was proud to be part of a movement that reminds kids about loving books.

“Today, kids have lots of questions and sometimes they get the answers from the wrong place like social media. People forget about books, about reading, and we’re here to remind them about the love for books,” Ilacad said.

Aguas said he was thankful for the opportunity to spread the word that “reading is a very important part of our life.”

Launched in 2013, the Read-Along ambassadors program aims to tap celebrities to be good role models and credible youth influencers who would promote reading among the youth through their participation in read-along sessions.

The next storytelling sessions will be held at the Inquirer main office in Makati on June 13, with Vital and Miss Philippines Earth winners as featured readers, and on July 11, with new reading ambassador Neumann. Interested participants may call 8978808 ext. 329. Slots are on a first come, first served basis.