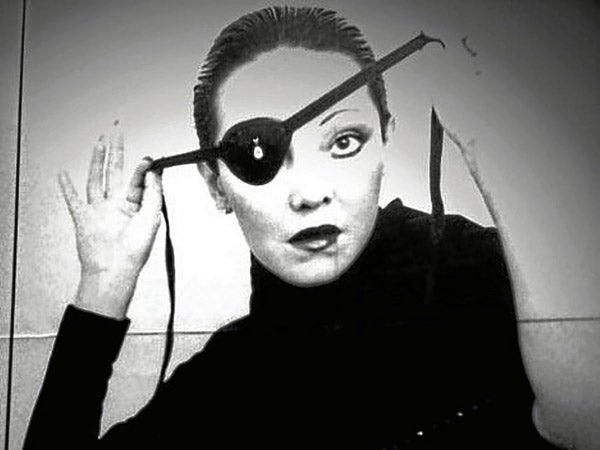 She was the ultimate society girl at the height of the decadent ’70s. Now living an independent life in New York, the beautiful Cristina Valdes talks about partying in gay bars, drawing strength from her fragile heart, and laughing her way through the horrible ordeal that destroyed her face. She will be retiring soon.

How do you remember your younger days?

I was a woman—no, a girl—in a bubble. My parents were extremely strict, very conservative. There were seven of us, but they were most protective of me. Maybe because even when I was really young I already knew I was sosyal. I was meant to be out there.

I remember I used to read the society pages and look at pictures of Precy Psinakis, Amelita Reysio Cruz, and I wanted to be like them. One time the designer Ben Farrales saw me—I had a long neck even as a child—and told me, “You will be my model.” And I modeled for him. I loved having my pictures taken. At a young age I already knew I belonged in that world.

How did you get out of that bubble?

I’ll tell you about my background. My father’s ancestry dates back to Queen Isabel, who needed a lady-in-waiting of good social standing. She took a Chinese lady whose surname was Son-Tua, which eventually became Tuason, and then the Tuasons intermarried with the Spanish.

My parents were very private people. I always respected them but I always did what I wanted, when I wanted, ever since I was small. You see, I was born with a traumatic heart, I was very fragile. I was always kept from playing, from doing this, from going out.

I was always the center of attention, yet I always felt left out. So that’s when I began to tell myself, “I’m going to fight this, and I’m going to be better than all of you.”

I started partying when I was around 16. I had my parents, my driver, the yaya as escorts. My maid went to all the parties I went to until I was 21, but I didn’t care. If I had to bring a whole van of maids, I’d bring them.

How were you able to get away with kissing your dates?

I got away with worse things, baby.

You were good friends with the Lopezes.

The Lopezes are one of the finest families in the world. One of my best friends was Robbie Lopez. He was always my escort, and we went everywhere. I was 16 and I was watching operas with him. Gabby Lopez was my neighbor in Pili Avenue in Forbes.

I remember he always used to take his BB gun and shoot at our house. My mom would go out to look for his mother and tell her, “Look at what your son did to my house! I saw him shooting with his gun!” And Gabby would change his shirt and say, “It wasn’t me!” Gabby already liked me then, but I wasn’t interested. I was always with his uncle, Robbie Lopez, who was older. I was always going out with much older men.

Tell us about the accident.

It was 1977. I was 24, and I was dating Gabby at the time. We came from a party and we were on SLEX near the Toyota building. That’s all I remember. I woke up around 30 days later at Makati Med, and my sister, Teres, was in the room with me and she told me, “You got into an accident.” I said, “Accident?” I couldn’t remember anything. Apparently I was dead, in a coma, and had 13 doctors working on me.

I had a therapist who would come in every day and talk to me for two hours, and my sister said I would wake up sporadically from my coma and ask for a manicure, but I couldn’t remember anything.

They told me I was in an accident. And I learned I had seven fractures on my skull, and the right side of my face was completely broken. I was blind in my right eye, I couldn’t hear, I couldn’t smell. I lost my face. But one of the first things I did was to call Gabby. I could hardly talk but I called him up and said, “I’m awake and I’m fine.” And up to now I believe it was the best thing I did in my life. You cannot move forward if you have anger. If you don’t move forward, you might as well get a gun and shoot yourself.

What happened after that?

I told my sister to tell Papa to get the best plastic surgeon he could get and make me look like Candice Bergen. I never cried. I laughed my way through the whole ordeal. And I partied even harder than before. I went out every night after working 10-hour days, partying like there was no tomorrow. I would fly to Studio 54 or San Francisco for the weekend. I felt like I could conquer anything.

You really lived in the fast lane. You used to go to parties with that elegant ivory cane and eye patch.

Back then everybody dressed to the nines! I remember that gay bar on top of Funeraria Tres Amigos along Libertad. After partying there, we would all get out of our cars along Mabini to Luneta, board jeepneys wearing our dresses and suits, then let our cars follow. I remember partying with Wolfgang Bierlein, Budji Layug, Josine Elizalde, Maurice Arcache, Mija Yvanovich, Emilio Lamarca, Marylou Prieto.

Back then there were no pretensions, no social climbers. People were real, and genuine. People today will never understand how it was like then. I formed a group of people who were all fun-loving like me. I don’t know if they were in pain, like I was.

You never seemed like you were in pain. It never showed.

I could have won an Oscar. I never cried. But I was in pain. I was suffering the entire time inside. Then, after 16 years of partying and pretending, the pain became too much. My life took a nosedive and I hit rock-bottom. I became very depressed and had to undergo counseling. One of the hardest moments to accept was realizing I could no longer do the things I wanted to do.

Before the accident, I was a sportswoman who loved scuba-diving and waterskiing. All of a sudden I couldn’t dive anymore, and I needed to wear a mask to ski. After the accident, I literally had to learn to walk again: I was deaf and blind. One day, I remember, I just decided to call you. I met you in Holland, and remember thinking what a happy, free soul you were.

I was ready to finally talk to somebody and I called you because I knew you would not have any judgments. Everybody else would be calculating who I was, where I came from and what I’ve been through. I called you up and we were together every day for years after that. You have been and will always be one of the biggest influences in my life. Did you know that I recently stopped smoking because of you?

As people grow old, they become more health-conscious. I stopped smoking for a year. But I always tell smokers to enjoy every puff. It’s the guilt that causes cancer.

You’re now based in New York, one of the gay capitals of the world. You had everything here. Why did you leave?

Partly because I knew it was the end of an era. We could never bring back those days, and partly because I could never pass up a challenge. I had the chance to go to New York and work. I planned to stay only six months and ended up living there ever since.

Saying goodbye was painful: I would be leaving my friends, and when I said goodbye to my parents, I broke down. I was facing the unknown. But I knew it was a chance to prove who I was and that I could do it on my own. I ended up staying because in New York I am free.

You give me the impression that through the years you have strengthened your beliefs, unlike many Gloria Swansons I know who have become very cynical and are toxic waste. Where does all this strength come from?

Each of the things I’d gone through: the medical setbacks I had as a little girl, the over-protectiveness, they all contributed to making me this way. I was brought up with so much love, so much care. My parents, my faith in God, good friends like you. And my mother is made of granite. After bringing up a child like me, and after all the things I had been through, she must be.

We are both reaching the finish line. I observed that people who retire grow old faster. Where will you retire? Why have you not married?

I had never given myself a timeline. As a young girl I did want to get married but, as I became very independent, especially when I had to take the bull by its horns, it just never crossed my mind again. I’ve had many boyfriends, and I’ve had my share of fun, laughter, heartaches and black eyes, but even when I was with a man, I was always independent. And even if I had a man, I will still do what I want.

But of course now I think about my old age, and who will take care of me. I have no children and I do get scared. I believe I can take care of myself but I’m scared that I may be building a false sense of security. I could retire in the Philippines, where my family is, but at the same time, I like my independence. Also, there’s really no problem if I don’t have anybody. Because you and I can always live together, like the odd couple. (laughter)

I always see the moon glowing from both sides. Any regrets in life?

No. Like I said, I always did what I wanted, when I wanted. And despite all the mistakes along the way, I’ve never looked back. I always looked ahead, baby.