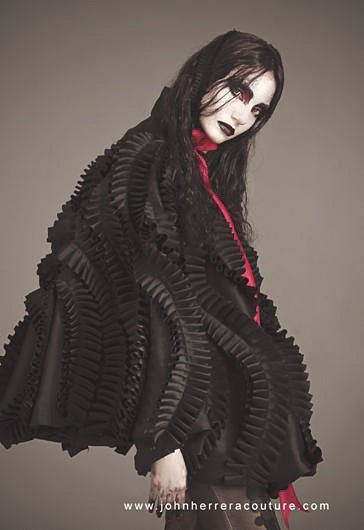 The four fashion capitals, London, Paris, Milan and New York, are strategically making sure that fashion is business, as they continue to be the movers and shakers in the international fashion arena. Fashion week organizers are fiercely competing, courting international young designers.

The trillion-dollar fashion industry is fueled by the ideas of a core group of a few hundreds, who have been shaping the global fashion world. This group is quite international and diverse. Fashion industries involve several players: the creative minds, the fashion councils, the trend-forecasting agencies, artisan groups, apparel and accessories manufacturers, wholesalers, distributors, buying agencies, fashion week organizers, their governments, culture and trade ministries.

A third of London designers were born outside of the United Kingdom.

The International Fashion Showcase (IFS), held during London Fashion Week, is now on its fourth year. It is the largest free public fashion exhibition of its kind, with 110 emerging designers from nearly 30 countries. The IFS has been drawing participation from young creative communities and rising economies. The participant does not just hope to win a prize but gets noticed by top international fashion brands.

London Fashion Week continues to be eclectic and cosmopolitan, subtly recruits designers at a young age and leaves an indelible impression, making London an aspirational city. The IFS creates a venue for countries not in the fashion arena yet, like the Philippines, South Africa and Colombia, which were the countries with entries that stood out last February.

Other competitions that support young designers are the Association Nationale de Développement des Arts de la Mode (Andam) in Paris and the Council of Fashion Designers of America (CFDA)/Vogue awards in New York, though they focus only on emerging brands.

Other competitions like the Hyères Festival in France and International Talent Support (ITS) in Italy tend to focus on designers from certain fashion schools. Linking with the fashion federations and fashion week organizers, these competitions, including the LVMH (Möet Hennessy Louis Vuitton) Award, provide a very wide range of opportunities for emerging talents.

For many years, the Andam competition was devoted to Europeans residing in France, but since 2005 it has been opened to international candidates. Notable first winner in 1989 was Martin Margiela, now a very well-known Belgian designer brand. Viktor & Rolf won in 1994, Christophe Lemaire in 1995, Jeremy Scott in 1998.

Since 2011, Première Vision Paris has been a partner of the Hyères, the International Festival of Fashion and Photography. This competition takes place annually at the Villa Noailles in Southern France, a very prestigious competition with top talent entries.

In 2011, Léa Peckre was the winner of the Festival de la mode de Hyères, under the jury presidency of Raf Simons. In 2013, jury president Felipe Oliveira Baptista said that winning Hyères 10 years before launched his career.

In Hyères 2014, the Premiere Vision Fashion Prize winner was 26-year-old Kenta Matsushige from Japan, who studied in Osaka and at the Ecole de la Chambre Syndicale in Paris. This year, 2015, Karl Lagerfeld will head the judges.

The Camera Nazionale della Moda Italiana, which organizes Milan Fashion Week, concedes that it is probably the least international of the four major fashion weeks, but they have stepped up international scouting over the past few seasons.

Italy’s ITS is on its 14th edition consisting of four separate fields, each with its own dedicated contest, jury and awards. In America, the New York Fashion Week (NYFW) also has affiliations or partnerships with organizations like the Mercedes-Benz Designer Exchange Program, Japan Fashion Week Organization and DHL for its DHL Exported program.

NYFW represents the unique cultural landscape of the city, and they take pride in identifying emerging designers from all over the world and offering them a global platform to showcase their talent. Founded in 1962, the CFDA now has Diane von Fürstenburg as its president and Steven Kolb as CEO. The CFDA has varied awards, namely the Geoffrey Beene Lifetime Achievement Award, Womenswear Award, Menswear Award, Emerging Talent Award for Ready-to-Wear (RTW) and International Award.

In 2013, awards went to Jack McCollough and Lazaro Hernandez for Proenza Schouler for womenswear, Thom Browne for menswear and Riccardo Tisci of Givenchy for International Award.

What makes IFS of London different is that it is a venue for unexposed young talents with real traditional technique or young international students trained at Central St Martin. Once named by fashion critics as a cultural exhibition for the public, IFS now draws in retail buyers who end up doing business with designers they discover at the event.

Enticing more designers from outside the fashion capitals definitely injects freshness and diversity into the fashion weeks, but there is something more than just being a venue for upstarts. Industry experts predict that the luxury consumers from the West, who live in North America and Western Europe, will fall below 50 percent in the coming years.

The transition marks the beginning of a new world for the fashion industry, wherein consumers from emerging markets in Asia, the Middle East, South America and Africa will dominate. These competitions are marketing strategies to lure in designers and the strategic markets.

Fashion week organizers have come to recognize that an increasingly global fashion industry can only be good for business. Fashion is becoming universal. Finally, welcoming the most talented from beyond traditional borders doesn’t mean compromising on design integrity.

One fashion powerhouse that quickly recognizes that fact is Kering, the company that owns Balenciaga, Gucci, Bottega Veneta, Stella McCartney, Alexander McQueen, Christopher Kane and YSL. In 2012, Francois Henri Pinault, chair and CEO of Kering, appointed the 28-year-old US-based designer Alexander Wang as creative director of Balenciaga, whose founder, Cristóbal Balenciaga, was revered by no less than Christian Dior. Just five years earlier, Alexander Wang had just launched his own label in America.

Wang, an Asian American, was chosen at the right moment. He can be seen as a citizen of the world, someone who could understand the digital world and the direction of fashion and of the retail world. Wang is capable in multichannel markets. He presided over successful fashion collections in three entirely different price points, with entirely separate customers.

As creative director for Balenciaga, Wang oversees the women’s and men’s RTW and accessories lines. His debut Fall-Winter collection was in February 2013, at the historic Balenciaga salons at 10 Avenue George V, Paris. The recent Balenciaga financial results showed double-digit growth. Last year, his high-street collaboration with H&M took off with great success, selling 70 percent of stocks in the first hour. Meanwhile, his own brand, Alexander Wang, has 20 stores globally and continues to grow at 20 percent every year.

With the fashion capitals’ independent initiatives, venues, channels and linkages, international young designers are indeed fortunate. Through fashion, they will eventually bring their own culture and inject freshness into the international language of fashion.