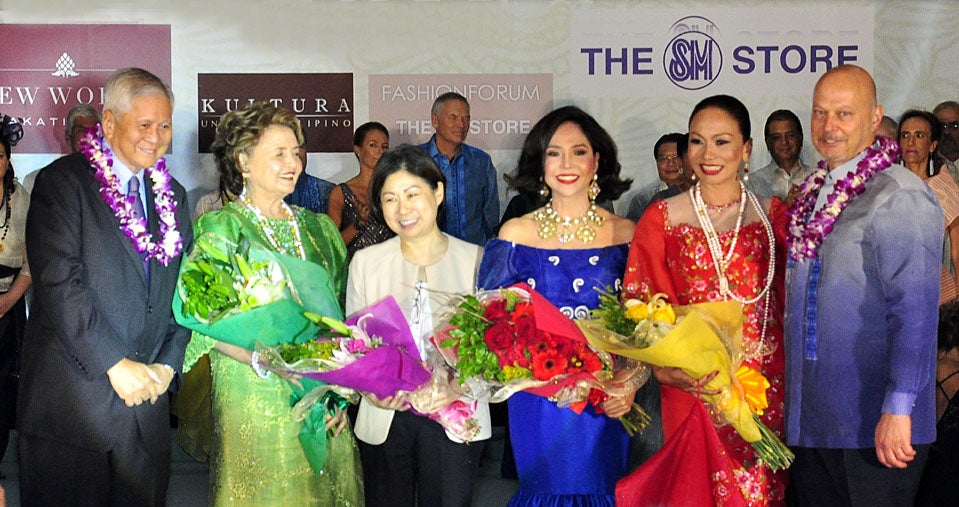 It was a night of chic fashion and warm fellowship as ambassadors of the various diplomatic missions in Manila and their spouses, as well as officials of the Department of Foreign Affairs, sashayed on the fashion runway to raise money for a cause.

Organized by the International Bazaar Foundation (IBF) of the diplomatic spouses, Global Fashion Flair II packed the ballroom of the New World Hotel in Makati. The event is a brainchild of the IBF and Spouses of Heads of Mission.

It was the second collaboration between the IBF and SM Store and Kultura Filipino, said Millie Dizon, SM vice president for marketing.

The fashion show had the men modelling casual men’s wear from The SM Store, designed by by Tonichi Nocom, no less.

Meanwhile, the women modelled cocktail dresses and long gowns from the Fashion Forum of The SM Store, as well as barong dresses and Filipiniana attire from Kultura Filipino, natch!

Austria honorary consul Washington SyCip stole the show when the renowned nonagenarian tycoon made a special appearance and marched on the rather lengthy ramp, eliciting a standing ovation from the delighted audience.

In the audience was Foreign Affairs Secretary Albert del Rosario.

“Proceeds of the show will go to the rehabilitation of houses devastated by Supertyphoon ‘Yolanda’ in Tacloban, Leyte, and Typhoon ‘Ruby’ in Eastern Samar,” said Gretchen del Rosario. “There are still many families struggling to recover and rebuild their lives and spirit. We are doing our best to help them.”

SM, through the generosity of Tessie Sy-Coson, provided the Filipiniana gowns, barong and accessories from Kultura; as well as clothes and shoes from the SM Store.

Famous Wingstop has spread its wings all over Manille.

It has opened recently at the ground floor of Glorietta 2, Ayala Center, Makati. The launch was hosted by Myx VJ Chino Lui Pio and model Sam Rodriguez.

“Wingstop has eight stores currently open and a quick growth projection of opening 50 more in the next six years,” said Charlie Morrison, president and CEO of Wingstop Restaurant Inc. (Global).

Wingstop started in 1994 in Texas. It now has many branches worldwide. In Metro Manila, it has branches at Eastwood City Walk and University Mall on Taft Avenue.

Jean Martell founded Martell Cognac 300 years ago. It is now the oldest of the great cognac houses.

This year will mark the 300th anniversary of the brand—a feat that truly speaks of the cognac house’s colorful heritage and expert quality. And what better way to toast this significant milestone than through a grand luncheon.

The lunch was held at the Tasting Room, Crown Towers, in City of Dreams Manila.

Jetting in for the event was Jacques Menier, heritage director of Martell Cognac.

Highlight was the tasting of a selection of the most premium Martell Cognac variants with Monsieur Menier himself. After all, Menier has spent more than 30 years in the brand, representing Martell worldwide, n’est-ce pas?

Martell VSOP (Very Superior Old Pale) Médallion bears a gold medallion engraved with the portrait of Louis XIV and commemorating the year 1715, the birth of the House of Martell.

Martell Cordon Bleu is the cognac for true connoisseurs and has acquired legendary status since its creation by Edouard Martell in 1912.

With its distinctive, arch-shaped bottle, Martell XO is a powerful symbol of inspiration—the intensity and finesse typical of Grande Champagne eau de vie or water of life.

“With its uniquely architectural, arch-shaped decanter, created by renowned French designer Serge Mansau, Martell Creation Grand Extra is a tribute to the creative spirit of Martell,” said Monsieur Menier. “At its heart is a powerfully built blend of the Borderies’ fresh and fruity notes together with the spiced character of aged Grande Champagne eau de vie. Creation Grand Extra has a powerful and intense tasting experience.”