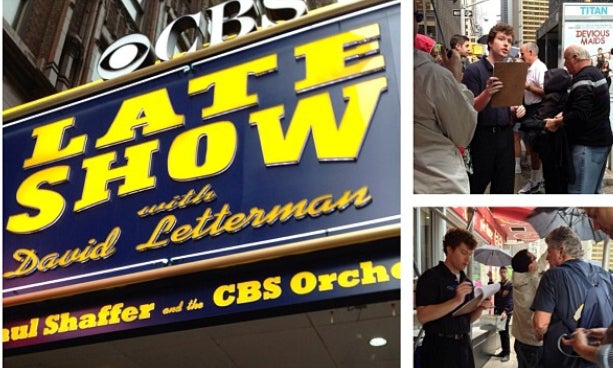 In my search for Halal Guys, I chose the wrong subway exit and stumbled upon a crowd of people that had gathered on New York’s West 53rd Street.

They were all staring at the stage door of the Ed Sullivan Theater, which had been home to “Late Show with David Letterman” for over 20 years.

I had passed that theater many times—on my way to catch Broadway shows, in my quest for late-night pizza or cupcakes, on yet another dizzying trip to Times Square—but never really paid attention.

This time, I did what any curious person would do—join the crowd and try to figure out what they were waiting for.

I heard those words whispered again and again. Eventually the door opened and a tall guy walked out. People started shouting, trying to get his attention. He got into a sleek black SUV, poked his head out of the open door and waved before speeding off. It was Benedict Cumberbatch.

Who else can I see here, I wondered. I whipped out my phone, Googled the list of upcoming guest stars and saw that Zooey Deschanel’s band She & Him was scheduled to perform the next day. I like She & Him. I walked to the front of the theater and spotted a guy with a clipboard. I asked, “How do I get tickets to tomorrow’s show?”

He was busy but friendly. “We don’t tape on Fridays but we’re taping another show today. This is the line for stand-by tickets.”

The line was long and my chances were slim, but I tried anyway. I didn’t make the cut. I walked away, met up with my friend Peter and found solace in a chicken and rice platter from my favorite halal cart.

After eating, we walked back to the side entrance of the theater and found a good spot. I wouldn’t be able to watch Zooey perform with her band, but maybe I could catch a glimpse of her as she left the studio.

We were surrounded by fans, some paparazzi and people I soon came to recognize as professional autograph hunters. They carried large backpacks stuffed with 8 x 10 pictures of celebrities. One of them was an enormous black girl (let’s call her Loud Girl) who kept hollering at the other autograph hunters. “Oh no, you didn’t,” she said. “If anyone should get her autograph, it’s me. I’ve been following her around for months but she never stops.”

“Radioman” Craig Castaldo was there, too, a former homeless man in New York whom Tom Hanks refers to as “a cultural institution.” Craig spent years hanging around film sets, always wearing a radio around his neck, becoming friendly with actors and landing numerous cameos on TV shows and films like “30 Rock,” “The Departed,” “Elf,” “Two Weeks Notice,” and even his own documentary.

People walking by stopped to ask who we were waiting for. Some of them stayed.

I kept my iPhone camera open and pointed at the door, ready to shoot Zooey. After long minutes of waiting, the door swung open and people started yelling, “Zooeyzooeyzooey!” Zooey walked out, turned to smile at us and got into the waiting SUV.

“Sorry, guys,” her publicist apologized, her hands clasped together. “She’s rushing off to a meeting.”

Loud Girl wasn’t pleased. She started hollering again. “She never stops! That’s why I like her sister more than her!”

Loud Girl may not have gotten her autograph, but I got my picture. It’s a little blurry, yes, but it’s unmistakable: the bangs, doe eyes, the cute dress; it was definitely Zooey and she was smiling at me.

Minutes later, Chris Pine also walked out of the door. I snapped a photo of him, too.

“I’m jealous,” said Jill, the other half of my New York tag team, after hearing about my “Late Show” adventure that night. Jill was in Virginia for a wedding.

Four days later, Jill would be back in New York and Tom Hanks was going to be the “Late Show” guest.

I was determined to get in. Getting stand-by tickets to “Late Show” is easier compared to other shows. You don’t need to go to the theater or the studio early in the morning; all you have to do is call.

I kept watching the clock, and as soon as it struck 11 a.m., I started calling. It took several tries and the person who picked up asked for our names and said, “You are number 11 and 12.” There were no guarantees but I thought our chances were pretty good.

A few hours later (yes, late-night talk shows are actually filmed in the afternoon), we were outside the theater, standing in another line.

Clipboard Guy, this time wearing an Ed Sullivan Theater jacket, handed us tickets that read, “We would like to welcome you to the ‘Late Show with David Letterman.’ Your laughter and enthusiasm are what make a taping of the Late Show successful. Have a great time!’”

Outside, more people wearing official jackets tried to get the crowd to cheer and laugh to prepare us for all the cheering and laughing we were expected to do during the taping. Soon, we were ushered inside.

After security check, we were led to our seats. We were in!

I had goosebumps. I couldn’t believe I was about to watch a taping of “Late Show,” which I started watching with my father when I was a little girl.

The theater was smaller than it looks on TV, but Paul Shaffer and the band sounded even better. After a funny video featuring Alec Baldwin and jokes from another hype guy, David Letterman appeared.

He had an ease about him that made him easy to like. He was warm and friendly and joked with the audience before he started his monologue.

He talked about President Obama, Viagra and Barbara Walters. That episode’s Top Ten was “Things You Don’t Want to Hear from Your Doctor After Gastric Band Surgery.”

The next hour or so passed by in a blur of jokes, cheering, self-deprecation and a lot of Tom Hanks. A mustached Tom, who was there to promote his Broadway debut in “Lucky Guy,” was the only guest that night. He and Dave talked about how Reader’s Digest named him the most trusted guy in America.

The episode’s musical guest was the cast of “Pippin” which performed a number from the Broadway show.

Since taking photos wasn’t allowed inside the theater, I was hoping we could run to the stage door as soon as the show was over to catch Tom as he left. But by the time we got there, he was gone.

We were able to meet bassist Will Lee who, along with Paul Shaffer, played on both “Late Night” and the “Late Show with David Letterman.”

Three weeks later, I was excited to discover that Johnny Galecki was going to be a guest on the show. I’m a fan of “The Big Bang Theory” and I think Leonard Hofstadter is kind of adorable in a really geeky way. Naturally, I wanted to go. But once you’ve had the chance to be part of the “Late Show” audience, you had to wait another six months to do it again.

We arrived at the Ed Sullivan Theater to find a lot of people holding worn copies of “Carrie” and “The Shining.” Stephen King was also a guest in the show and his fans had come out in droves.

Something strange was about to happen, we were sure, given the amount of people from the show’s crew who were out on West 53rd Street. Citi Bikes, New York’s bike-share program, had just been launched, and it looked like the “Late Show” was honoring it by making a guy dressed as Abraham Lincoln race against a guy dressed as a bear.

We stood under the hot summer sun and watched the action. Then, the door opened and I whispered excitedly, “It’s him!”

“Johnny! Johnny!” people started yelling. Johnny Galecki, looking as un-Leonard as possible in a dark suit and a full beard, waved at the crowd. He grabbed a Citi Bike and started riding in front of us. He was going to race against Abe and the bear.

With Biff Henderson giving them the go-signal, the three started pedaling away. Johnny was the fastest and he didn’t stop after passing the finish line. He kept riding and disappeared around the corner. I watched the crew, who at first seemed amused and then worried, when Johnny didn’t come back immediately.

He ended up biking around the block and was met with loud cheers upon returning.

He got off the bike and headed toward us. The crowd got even louder. Johnny started signing autographs, a cigarette trapped between his lips.

“Johnny! Johnny! Johnny!” the yelling got even more desperate. He stopped right in front of me, and Jill took a quick picture of us. Johnny continued to make his way down the crowd for more pictures and autographs before waving again and leaving.

We waited for Stephen King, too, but he ignored the crowd and went straight to his car.

Later that night, we watched the episode on TV and tried to spot ourselves as the bike-race contenders tried to win a cordless phone.

That summer in New York, “Late Show with David Letterman” stopped being just a show I used to watch with my father. It had leapt out of the TV screen and into my life, becoming a place for seeing stars and making memories.

When I heard of Dave’s decision to retire after 33 years in late-night talk shows and around 6,000 episodes, I felt sad. It is the end of an era—for him, his crew, TV audiences worldwide, and those of us who were lucky to have set foot in that studio and watched the magic happen live, even just once.

Thank you, Dave, for the shows, the silliness, the laughs, and the memories.