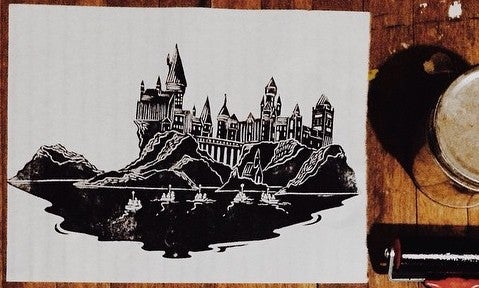 Graphic artist Dom Ochotorena discovered he enjoyed rubber-cutting when he had to try it for one of his fine arts subjects in college.

“It was a bond paper-sized project; I don’t remember what it was, I wish I had taken a photo of it,” he recalled.

Cutting into rubber took a back seat when he landed a job in the art department of Universal Robina Corp. (URC), where he helped redesign the Chiz Curls mascot, and worked on graphics for Cloud 9 and other candies.

His love for the craft was rekindled after he put carving tools on his wish list for his company’s Secret Santa in 2013. “My previous tools had all gone to rust noong na-‘Ondoy’ kami,” he said.

Thankfully, his Secret Santa was able to furnish him with a new set of tools that allowed Ochotorena to do carving again.

Ochotorena uses rubber blocks, a Speedball lino cutter and an Xacto knife for finishing. He finds the process relaxing, and says it is a great way to pass the time. “Kahit saan masarap siya gawin, lalo na ’pag naghihintay ka,” he said.

Pretty soon, he started getting custom-stamp requests and invitations to do workshops.

He started an Instagram account showcasing his work and joined Ang InK (Ilustrador Ng Kabataan), the country’s first organization of children’s illustrators. Not just anyone can join the group—one must take a talent test for evaluation before becoming a member. Ochotorena said he had to apply a number of times before making it.

His work stands out for its attention to detail.

Inquirer Super asked him to do a live demo, and we were awed at how effortless it was for him to finish a 2×2-inch piece in 20 minutes. Whatever he can sketch, he etches.

He also does crazy good portraits out of rubber blocks, like Pope Francis, Jeremy Lin, Mona Lisa and a few commissioned pieces.

For a previous exhibit with Ang InK, he did a bigger carving of a scene from “Harry Potter and the Sorcerer’s Stone.”

Ochotorena’s work, along with other Ang InK illustrators, will be showcased at the InK on Paper exhibit at Prism Gallery Makati on May 30.

To see more hand-carved art from Ochotorena and to request commissioned work, follow him on Instagram @domochotorena.