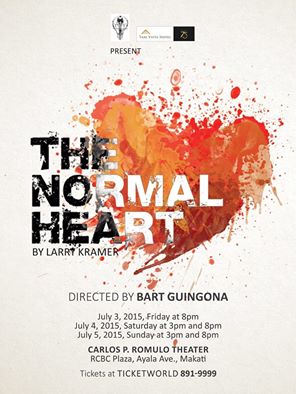 ‘The Normal Heart’ sears hearts in Manila this July

Bart Guingona has yet to watch Larry Kramer’s “The Normal Heart” live, but he’ll already direct it and play the lead role of Ned Weeks in a five-show production in July.

“I like it that way,” he says. “It gives you fresh eyes, a fresh perspective.”

“The Normal Heart” was first staged  off Broadway back in 1985. Between then and 2011, when it finally hit Broadway, groups picked up the script for hundreds of shows.

A largely autobiographical piece, the play is set in New York in the early 1980s, when HIV/AIDS was first recorded in the city’s gay community. Weeks rallied members of the community to fight what was fast becoming a plague, first called “gay cancer” and lacking research, even recognition.

The story includes a romance, a brotherhood and an organization all going through emotional and socio-political turmoil because of the uncertainties around HIV/AIDS and what Weeks passionately believes is deliberate neglect by government.

In 2014, the play was adapted into a critically acclaimed HBO TV movie directed by Ryan Murphy. It starred Mark Ruffalo as Weeks and Matt Bomer as his love interest Felix Turner.

“I’ve seen the HBO movie, which I liked, but I think a stage version would be more powerful,” says Guingona. He had already read parts of the script in the 1990s and found it highly dramatic. As early as then, he was  mulling a staging.

Weeks is relatable, says Guingona. His own personality isn’t very far from the main character’s own—his angers and frustrations, his being a loudmouth, which gets him into trouble.

With the five shows in Manila—“The Normal Heart’s” first-ever staging in the Philippines—Guingona wants to highlight the timely issue of HIV/AIDS which is affecting more and more individuals, many of them in the gay community.

Joining him in the play are Topper Fabregas as Turner and Roselyn Perez as Emma Brookner, the doctor who first took note of the rise in HIV infections. The cast also includes Richard Cunanan, Jef Flores and Red Concepcion. Three more roles remain to be cast, says Guingona.

The disease is “alarming and below the radar,” he says. “The condition [in the Philippines] now is similar [to the conditions in the play]; the mainstream is oblivious, and homosexuals are marginalized.”

He notes the bigger picture to examine—age-old issues of machismo, religious taboos against homosexuality, the politics of allocating public resources to HIV treatment and prevention.

To those who would think the Filipino audience is not yet ready for frank portrayals of the disease and its victims, Guingona says, “It’s already the 21st century, if they’re not ready, they should be.”

But “the last thing I want is for people to see [“The Normal Heart”] as a gay play,” Guingona hastens to add. “It’s much deeper than that.”

“A friend asked me why the play is called  ‘The Normal Heart,’ because nowhere in the script is it mentioned. It is based on a poem by W.H. Auden (“September 1, 1939”)… It says that we can keep fighting… but what the normal heart wants is love.”