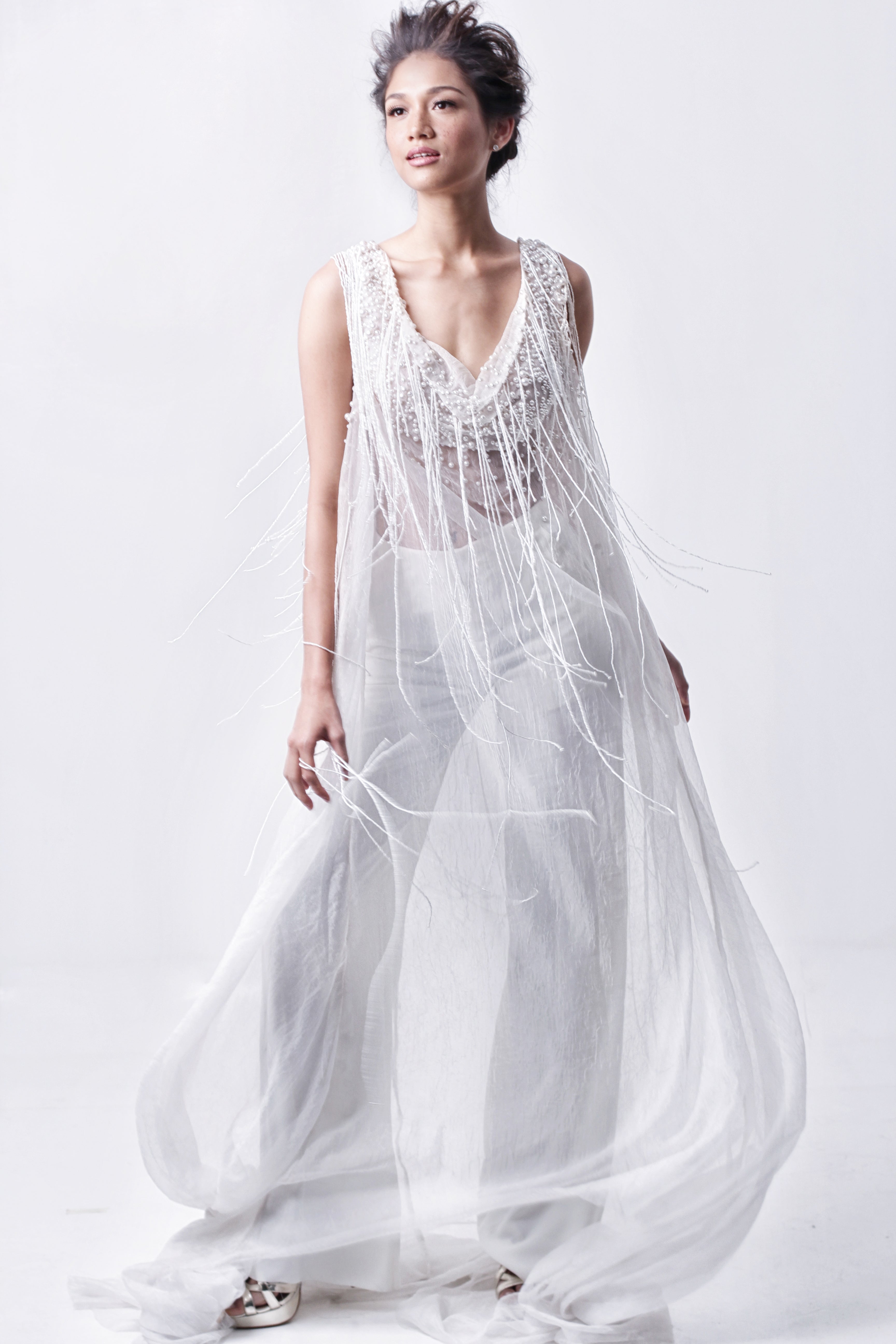 From darkness to high fashion

BERNARD Escalona’s designs are straight out of a twisted fairytale. Whimsical, excessive and white best describe his pieces worn by models in a show held at the Fashion Institute of the Philippines.

With each gown heavier than the one previously presented, this was a collection that demanded attention. It was for the bride, the drama queen, or the empress.

Though dreamlike and regal, the outfits, said Bernard, were inspired by something sinister. He called his collection “Virgin Sacrifice”—each dress made for an icon of sacrifice, “the White Lady, the Madonna, the Queen, and the Maria Clara.”

There are layers and there’s volume, embellishments of precious stones, all of which one can find in religious iconography or cultural practices.

This is nothing new to Bernard whose works have a “dark” character, an “eerie feeling” that he likes to capture.

In his works, we see different styles, from body-con to A-line to princess cut. A full-length sheer dress is embellished with pearls, beads and sequins, while underneath are wide leg pants. Elegant, flowing and reminiscent of a Dior, this had to be one of our favorites.

As the collection unfolded, it showed more texture and volume, layers of lace, sheer fabric. A cropped top with fringe was partnered with sheer vest and full skirt, but could easily have been matched with other items on the runway.

Bernard showed that the convention of wearing a single look during a grand celebration need not always apply, as separates can look as majestic.

It was easy to see how a dark mood was transformed into something whimsical; the gloomy inspirations were present, yet somehow seemed joyous and triumphant.

Bernard’s fascination with fashion started at a young age when he toyed with his grandmother’s wedding gown. He recalled that every time he looked at his lola’s wedding gown, he imagined being in a land of make-believe.

His pursuit of a fashion career allowed his imagination to run freely, to be in a place where he could be himself.

It’s also easy to understand how he is greatly influenced by the regalia
of religious icons owned by his family and his grandmother. He loved the grandeur of churches, their awe-inspiring architecture, how everything inside was opulent, how each religious item had a story.

Bernard said he wants to be regarded as a true craftsman, a goal
only a few can grasp. “Most people don’t appreciate couture work,” he said, adding that the majority look for a fastfood approach for their one-use
purchases and, therefore, choose the cheapest alternative.

“Not a lot of people value clothes as art, or view designers as artists,” he
noted. However, when Bernard gets to meet an ideal client, one who sees what he does as a personal masterpiece, he is limited only by his imagination.

Bernard is an artist, who sees stories in a grand manner, in the dark, and in the whimsical. He derives inspiration from the rich tapestries of history and lore and puts his own spin. With each piece of clothing, with each drape and cut, he envisions a work of art.