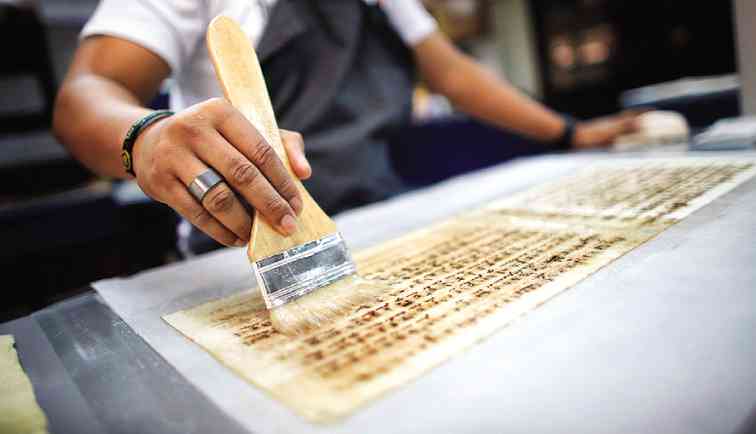 Corporate social responsibility comes to the aid of cultural heritage

In 2010, during the run-up to the quadricentenary of University of Santo Tomas (UST)in 2011, its Miguel de Benavides Central Library mounted an ambitious exhibit of its rare-book collection that included first or rare editions of European classics in the sciences and humanities.

They included the original 1543 edition of Copernicus’ seminal work on the heliocentric theory; an incunabula, a book printed before 1500: the 1492 Seville edition of the Spanish translation of Josephus Flavius’ “The Jewish War”; and a very rare copy of the Plantin Polyglot Bible, printed between 1569 and 1573 under the patronage of King Philip II of Spain, other extant copies of which could only be found at the Vatican, British Museum and Huntington Library of America.

Aside from the rare-book collection (now called the Antonio Vivencio del Rosario UST Heritage Library), the exhibit “Lumina Pandit: An International Exhibit of Historical Treasures” also displayed ancient documents from the UST Archives and natural and cultural relics from the UST Museum of Arts and Sciences.

“Lumina pandit” means “spreading the light,” and the showcase of the rich collection of educational, typographical, archival, natural and cultural heritage artifacts should illustrate how the Pontifical University, according to Fr. Angel Aparicio, OP, UST’s prefect of libraries, has been spreading all these centuries “the light of knowledge and wisdom.”

Although it had not been a secret that UST had amassed quite a collection of rare books across the centuries, the exhibit and the massive volume published to act as a catalogue to the exhibit, as well as an anthology of essays commenting on different aspects of UST’s cultural and scientific heritage, shocked many.

Moreover, the vicissitudes of history have not been kind to books and heritage. Had UST not transferred from Intramuros to Sampaloc, its vast historical treasures would have been totally destroyed by the carpet-bombing of Old Manila during the Japanese invasion and the subsequent American liberation.

UnionBank chair and chief executive Justo A. Ortiz saw the exhibit and the catalogue and he was so impressed that the top bank gave UST an endowment to digitize as well as restore and conserve its collection.

The scientific restoration and conservation work done on the collection is detailed in Chapter 4 of the new book “Lumina Pandit Continuum” (2015; UST Miguel de Benavides Library and UnionBank of the Philippines; 487 pages), which will be launched tomorrow at the UST Library.

In two articles by the country’s foremost restorer, Maria Bernardita Maronilla Reyes, the beginnings and development of scientific conservation in the Philippines is traced through the work done all these years on the UST collection; as well as the preventive measures undertaken to arrest the deterioration, especially since the UnionBank project involves saving a collection of 30,000 volumes!

As its title implies, the book is a continuation of the original “Lumina Pandit” exhibit and book of 2010-2011. It names the “Three Filipino jewels” of the UST collection—the three first books printed in the Philippines by the Dominicans in 1593: “Doctrina Cristiana en Lengua Española y Tagala,” “Doctrina Cristiana en Letra y Lengua China” and ” Pien Cheng-Chiao Chen-Ch’uan Shih-Lu.”

(The last has been discovered only recently and is subtitled “Apologia de la Verdadera Religion”; it was obviously a book meant to be used by the Dominicans in their missionary enterprise in China and among the Chinese in Binondo and the Parian.)

But the focus of the book is not the start of Spanish colonization but its end at the turn of the 20th century.

“This book’s title is ‘Continuum’ because it attempts to give shape to this fact in the history of our institution, its continuous uninterrupted service to the Filipino nation,” writes Fr. Aparicio, editor and co-writer of the book. “And to do it we have chosen a most crucial moment in its existence—the independence of the Philippines from Spain and the beginnings of the American administration.”

The tumultuous historical transitions occasioned a reckoning of the Spanish record, especially of the legacy of the Dominicans and other missionary orders.

For Wenceslao Retana in his 1907 book on the life and writings of Jose Rizal, the record was notorious, saying that Rizal himsellf had written in his novel “Noli Me Tangere” that “only the worst products of the (Iberian) peninsula” were assigned to the Philippines.

Philosopher Miguel de Unamuno, a member of the Generation 1898 of post-empire Spanish writers and intellectuals, seconded Retana: “And what kind of Spaniards must Rizal have known in the Philippines? And above all, what friars! For the friars are generally recruited here in Spain from the most ignorant classes, the uncivil and rude, those who have abandoned the plow and the soil to prosper in a convent.”

Through “Continuum,” Father Aparicio submits a belated rejoinder: “In this book we present half a dozen of those ignorant, uncivil, rude friars who entered the convent to prosper and who came to the Philippines to abuse the simple, ignorant and fanatical natives.”

Essays in the book discuss the contributions of these six friars—five Dominicans and an Augustinian—to the rise of Christian civilization in the islands to disprove the claims of Rizal et al.

Maria Svetlana T. Camacho of the University of Asia & the Pacific discusses the “Cagayan Histories” of Fray Malumbres (1858-1932), who wrote extensive accounts of missionary and socioeconomic labors in the three new provinces carved from the Cagayan Valley—Nueva Vizcaya, Isabela and Cagayan—in the middle of the 19th century. Camacho notes that Malumbres’ “Histories” are “suffused with missionary zeal.”

As Mojarro writes: “Impartial, controversial and sometimes belligerent, it must be understood today in the context of an intellectual reaction against the anti-Catholic and anti-Spanish propaganda being carried out by several newspapers in the archipelago under the wing of the newly established American government, which was especially hard on everything that had to do with the role of the religious orders.”

Accused of obscurantism by Masons, liberals and ultranationalists, UST, however, keeps the oldest and most extensive natural-history collection in the country, which is documented in the massive three-volume work of the Dominican scientist Fray De Elera, “Catalogo Sistematico de Toda la Fauna de Filipinas” (published in 1895 and 1896).

The catalogue is discussed in the essays of Arvin C. Diesmos of the National Museum and Mae Lowe L. Diesmos and Rey Donne S. Papa of the UST College of Science.

They declare that the work “is one of the earliest, if not the first, attempt at compiling a comprehensive systematic listing of the faunal diversity of the Philippines.” De Elera himself may be one of the first scientists to declare the incomparable natural riches of the Philippines. As he declared, “We do not hesitate to say it: neither in its flora nor its fauna do the Philippines need to envy any other region in the world.”

Aside from their contributions to the sciences, the friars were world-class intellectuals and thinkers, as shown by Cardinal Gonzalez, who came to the Philippines when he was just 18 years old and acquired all of his academic degrees in UST and, going back to Europe, became adviser to Pope Leo XIII and triggered the Neo-Thomism movement. His philosophical and theological works, particularly “Estudios Sobre de Filosofia de Santo Tomas,” published by the UST Press in 1864, and the overall Dominican intellectual legacy are discussed by Maria Liza Ruth Ocampo of the University of the Philippines.

The anti-friar campaign reached its peak during the Philippine revolution and the American invasion. Published in 1900 by the UST Press, Fray Herrero’s “Nuestra Prison” is, according to historian and teacher Ma. Eloisa G. Parco de Castro of the UST Faculty of Arts and Letters, the longest and most comprehensive account of a very controversial aspect of the Philippine Revolution.

At 31 chapters and over 800 pages, “Nuestra Prison” is, according to the American Jesuit historian Fr. John N. Schumacher, “the fullest account we possess” of the friar ordeal during the Revolution.

Meanwhile, against the charge by the likes of Trinidad Pardo de Tavera that Spain and the friars did not conserve Philippine culture, Morraro tackles the work of the Augustinian Fr. Marcilla, whose “Estudio de los Antiguos Alfabetos Filipinos,” published in 1895, collected and reprinted the Ilocano and other lexicographic studies of his Augustinian confreres from the 17th century.

Cecilia Espinosa of the UST Computer Center writes about efforts of the UST Library to cope with the challenges of technology. Former UST rector and Commission on Higher Education chair Fr. Rolando V. de la Rosa, OP, speculates whether printed books would survive in the future.

The book closes with a retrospective essay by Regalado Trota Jose on the 16th-century document in baybayin script from the UST Archives. Recently declared a National Cultural Treasure by the National Archives, the document in ancient pre-Hispanic syllabary has survived and endured in the vaults of the UST collection all these centuries.

It should now cast—to use the title of Jose’s essay—“Lux Aeterna” or “eternal light”—on the formidable legacy of Spanish civilization to and friar evangelization of the Philippines.

UST Rector Fr. Herminio V. Dagohoy and UnionBank chair-CEO Justo A. Ortiz will lead the formal launching of the book “Lumina Pandit: A Continuum” on May 26, 4:30 p.m. at the Miguel de Benavides UST Central Library. Open to the public. Call 7409709.