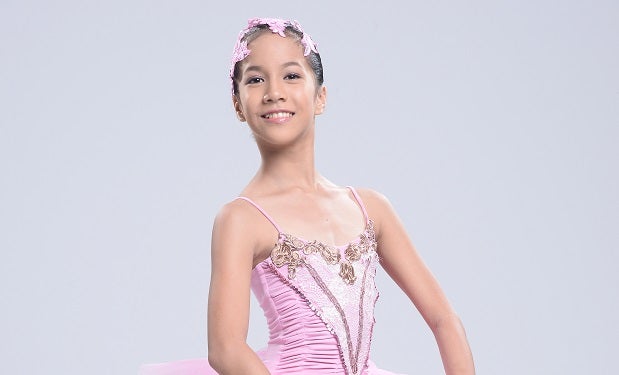 HER love for  ballet  dancing probably started when she was  watching the Barbie cartoon series.

She was  only  three years old at that time but  Charisse  Galang knew  that she wanted to be  a successful  ballerina  in the  future.

But the journey to her dreams was never easy.

But this did not  stop her from pursuing her dream.

Unknown to her mother,  Rhaida,  Charisse  auditioned at  Juan Sumulong Elementary  School in Pasay City for  ballet when she was  nine years old.

This opened the door for a scholarship at Ballet Manila after she was  chosen to be one of its scholars.

“She is highly disciplined and motivated,” Rhaida said of her daughter.

“She auditioned and qualified for a scholarship at Ballet Manila three years ago. Then there was a second audition which required her to practice ballet everyday.”

From Pasay City, Charisse’s family transferred to Cavite where she attended school. Because of the distance, she was unable to train everyday and as a result, her level in ballet dropped.

But this did not dampen Charisse’s spirit, nor her enthusiasm. Instead, she followed a routine to improve her ballet skills.  She went to school in the morning, and earnestly trained at night. For a time, she also trained in gymnastics and clinched the gold medal as overall champion in Cavite.

One time, Charisse said she even collapsed  because of strenuous  training. During summer, she said,  she would  train  six days a week, and seven  hours every session.

Charisse said  they also had  to  borrow  money so  she could  commute from her school to  Ballet  Manila  on Buendia Avenue which usually  costs  her P150 to  P180 daily.

Three years now into ballet, Charisse has been part of productions like The Nutcracker, Swan Lake and Sleeping Beauty.

She plans to continue her training, achieve significant progress, and someday make a mark. She also aspires to maintain her honor standing in school, with the same discipline since her first grade that elevated her to the honor roll.

Charisse is now among  the “gifted” children featured in a recent  Promil Pre-School milk TV commercial.

“I feel that this is something innate in her.  Add to that her natural courage and determination,” her mother said.

“As a mother, I can only be proud of what she has achieved and I support her all the way. Looking back, I can truly say that all my sacrifices are well worth it,” said Rhaida, who is currently based in Riyadh.

Charisse’s mother decided to work abroad in 2006 after separating from her husband to support her two young children. Despite the odds, she bravely pressed on, armed only with her faith and fortitude to secure her children’s future.

“The challenges were varied and unrelenting, and there were times that I felt I wanted to give up.  Before, I was sharing responsibilities with a partner, and to suddenly find myself raising my kids alone, it was really a shock,” she  said.

“But I was determined to be the best mother to my daughters, and provide for them with the limited resources and capabilities I have.  So I took on a number of jobs and sold anything – from street food to motorcycles – just so we could scrape a living. Then I realized I must sacrifice a lot in order to build a life my girls truly deserve.  I had no choice but to leave them to become a caregiver abroad,” Rhaida recalled.

With her talents, Charisse now adds up to the growing number of “gifted” children  in the country,  which was estimated at 1.27 million based on  a 2010 report of the Department  of Education.

She also now belongs  to the so-called  “Gifted  Movement”  in the country.

“I keep on believing to be a better ballerina  and I really want to dance,” she said.

“My mother did not   achieve her dreams so she wanted   me to reach mine,”  Charisse added. AC