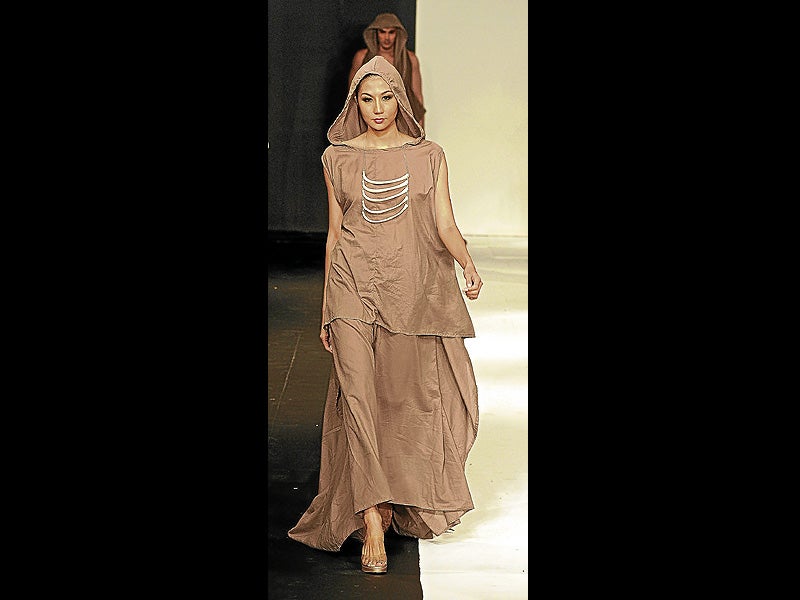 IT WAS an eclectic mix of collections that left no seat empty at Philippine Fashion Week Holiday 2011’s Sony Vaio two-part show, held May 14 at the SMX Convention Center, Pasay City.

Africa served as creative inspiration for designers Lagat, Protasio, Garcia, and Chua. Protasio’s “desert nomads” wore billowy pieces in shades of brown and “‘greige” (a combination of gray and beige), and had tent-shaped silhouettes which “allow for the joy and ease of carefree movement.”

Lagat, Project Runway Philippines Season 1 winner, titled his collection “An African Haunting,” taking off from a story of travelers exploring African lands, facing “extraordinary practices of cannibalism and black magic.” His shapes were linear, in mostly dark shades, ranging from wearable to costumey.

The colorful city of Marrakesh was Garcia’s focus for his equally vibrant collection. Models sashayed down the runway in huge mosaic-printed gowns, which would most likely remind one of the city’s unique buildings.

Orticio was also inspired by architecture, but from the Byzantine era. His tailored, layered dresses in off-white were embellished with gold and crystals. Floresca’s heavy black and sexy pieces, a collection for those who can bare skin, provided good contrast to Orticio’s white set. Parcon’s sheer shifts with puffy skirts in tulle were just as sexy.

Chua’s metallic gowns were flowy, regal, and perfect for eveningwear. His set “pays homage to the film ‘Stargate,’ with structured, multidimensional pieces…that exude the futuristic and sci-fi feel of Egypt.”

Go, who incorporated geometrical details into his pieces, brought the audience to the space age with his high-waisted, modular designs. Dulay used the game “Tekken Warriors” as her inspiration, with separates in triangular shapes and neutral shades.

Carado had a different take on the futuristic theme, playing more with floral designs and a vivid palette. Draping and quilting ensured that each piece had a feminine touch.

The same draping techniques were present in Villafuerte’s “Ascetism” set, which had bright orange separates and one-piece creations. The bald caps worn by the models immediately reminded one of monks, which was exactly what Villafuerte wanted to capture—“the mystic seclusion characteristic of a monk’s life.”