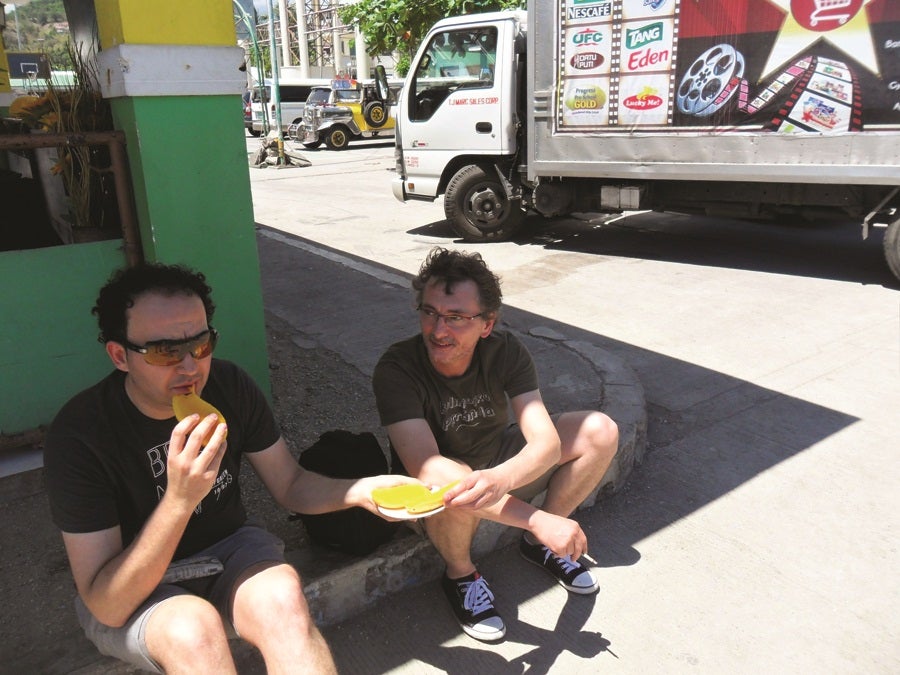 ANDONI Aduriz (right) getting his share of sweet mangoes

The chef took a whiff, then a taste, of bagoong Balayan. His assessment? “Magnifico!”

That was Andoni Aduriz of Mugaritz, outstanding chef from Spain who took a trip to Anilao, Batangas, with chefs Chele Gonzalez of Vask and Myrna Segismundo.

The trip was in support of Oceana, a group that advocates cooking and eating small fish as a way to “save the oceans and feed the world.”

For the Spanish chefs and Spanish media, Segismundo demonstrated how sinaing na tulingan was prepared, from the pressing of the fish with salt, to placing the fish inside the seasoned palayok (clay pot), underlining with banana leaf and dried kamias (bilimbi), then steaming over low fire.

The clear waters of Anilao and the cool breeze in the searing heat of the sun enticed Aduriz to jump in, no matter that he didn’t have a change of clothes. He was clearly enjoying himself, eating mangoes, the best from Batungbakal farms in Zambales.

Aduriz and Gonzalez, with 18 top chefs from all over the world (e.g. Grant Achatz of Alinea, US; Rene Redzepi, Noma, Denmark; Brett Grahan, The Ledbury, UK), will cook small fish in their respective restaurants on World Ocean’s Day on June 8, a commitment made at a gathering in San Sebastian, Spain, at the Basque Culinary Center on March 17.

But why small fish?

They are mainly caught to be used as fish meal and fish oil to feed farmed fish like salmon as well as chickens and pigs. But if small fish are used as food instead, that will mean more food for people, food that is high in nutrients and low in toxins.

According to Oceana, the Philippines is considered “the center of marine biodiversity.” But the country’s fishing grounds are in danger because 75 percent is overfished.

What needs to be done is “marine conservation, habitat protection and sustainable fisheries” by rooting out illegal fishing, poaching by foreign fleets, and discouraging “capturing of young fish before they can grow to adulthood.”

I hope Filipino chefs as well will take up the challenge in their restaurants and show that small fish aren’t only for cooking at home but also can be as delicious and as saleable as big fish.

Mario Sandoval and Segismundo, like other chefs in Madrid Fusion Manila, gave diners a taste of their top-rate cooking.

At the Peninsula’s refurbished Old Manila, the first course set the tone for the evening in presentation and flavor.

Segismundo’s bulalo had the bone separated from the marrow, the beef broth in cups with a leek and corn flan.

It was the tuna that reminded me of Sandoval’s talk at the Madrid Fusion Congress. He said he and his chefs were mulling over how to do a fish roast properly so that they forgot a tuna head was cooking in the oven.

By the time they remembered, it looked like the tuna jaw, reminiscent of the tuna head inasal done so well in many ihaw-ihaw joints here. He served it with a jam of tamarillo (fruit from Peru) and crispy tapenade.

The main meat course was an asado of lamb, cutlet and loin, braised with tamarind. Segismundo wanted to capture the sour flavor Filipinos love.

Sandoval made a sorbet of fresh almonds with yuzu surrounded by roasted strawberry soup. Segismundo said she asked pastry chef Jill Sandique to make the cake called Maharlikang Tsokolate, a chocolate marquise with frozen saffron mousse that had Malaga raisins and tropical fruits, a cocoa nib meringue and a sprinkling of grated coconut.

It was brandy night at Terry’s in Salcedo, Makati. Rows of glasses hinted at the main drink that evening, the different kinds of sherry wines specifically from the Jerez region of Spain—from the light La Janda Fino to the creamy Canasta (did it take its name from the card game?), to the Solera “1730” and the Pedro Ximenez “1730” by Alvaro Domecq and the Fundador Exclusivo.

Cesar Saldaña, director general of Brandy de Jerez Regulatory Council, was on hand to give a description of each. We both had the same story about a bar in Madrid, La Venencia, where the bartender was not the friendliest person, forbidding us from taking photos of the bar and the people, and who dismissed Saldaña’s offer to give his Jerez sherry a try.

But that evening, the Jerez brandy couldn’t steal the show from the food though most were treated to the same wines we were drinking—huge white asparagus tips stuffed with tuna belly, lobster and grouper soup with a hint of cream sherry, the wonderful scallops with the brandy sauce, oxtail crepe with a touch of Old Oloroso Sherry and truffle of Valdeon cheese with Manchego shavings.

As Juan Carlos de Terry explained his cooking, one could see that he must have loved to create the dinner that evening because the wines were from his beloved hometown, Cadiz.

Having so many desserts didn’t deter us from finishing what was set before us, especially the small leche flan which we had in one bite, and the olive oil ice cream.

The Brandy de Jerez evening and the tapas night were fantastic preludes to the main culinary event.