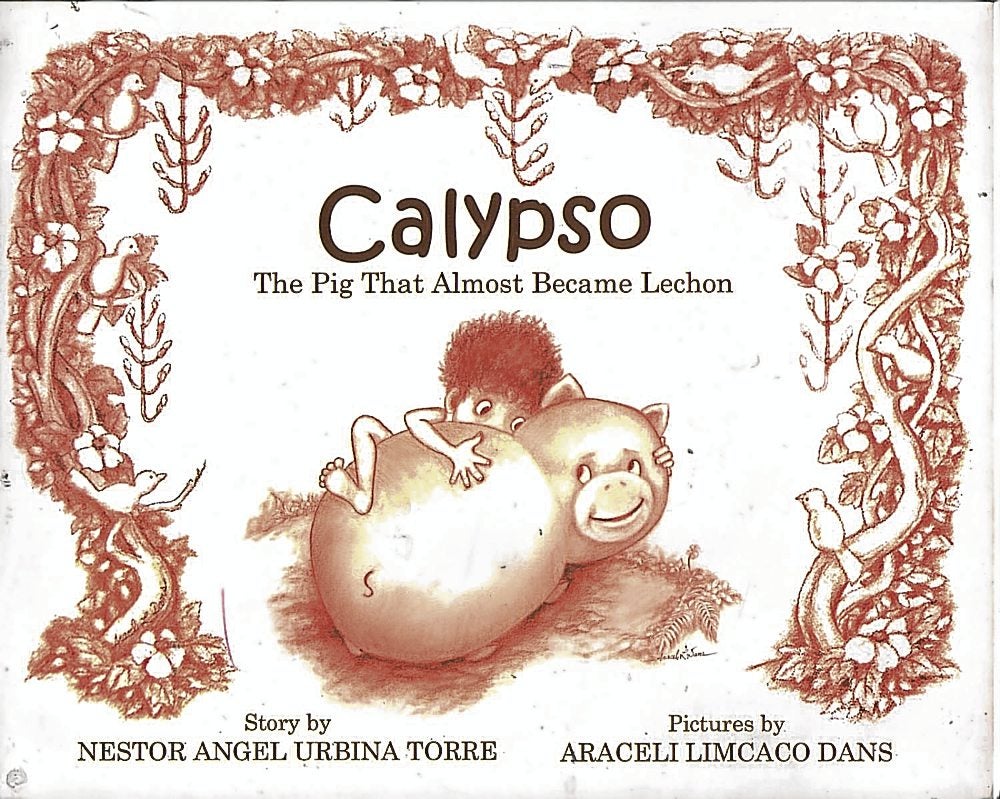 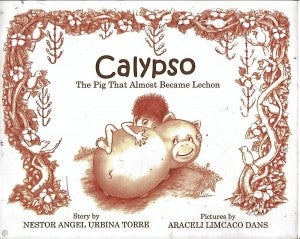 One might suspect Cheloy Dans, forsaking her lovely calado paintings, has slipped into second childhood with her naughty illustrations in “Calypso, the Pig that Almost Became Lechon.”

Well, fear not, all ye multitudes of proud owners of Araceli Limcaco Dans paintings. She’s only revealing her innate mischief, turning it into attractive illustrations for Nestor Torre’s children’s book.

Torre had asked his good friend Cheloy for just one illustration.  She got so carried away and came up with 20 or so – boy and pig nuzzling (leeps to leeps!). Or Boni (the boy) imagining disguising Calypso before they run away,  pig in granny glasses and scarf,  pig as Batman, you get the drift.

Excellent artists never stay in one place, constantly reinventing their work as they evolve from one phase to the next, searching for new expression.  That, Cheloy has done all her life since she was 12 and rendering propaganda art for the guerrillas in World War II.

Trained by Fernando Amorsolo, whom she so impressed with her talent, he allowed her to graduate from UP with a Bachelor of Fine Arts degree in three years instead of four.  She kept right on painting and also kept having children, 10 in all, after she married José Dans Jr. To keep them busy, she filled cartons with odds and ends of scrap material for them to fashion into creative little toys and artful objects.

She also taught Art at Ateneo’s grade school, eventually forming the Philippine Art Educators Association, spreading the faith for public- and private-school teachers in all 13 regions.  She and Nestor Torre teamed up in the Ateneo Educational Television program, he as director and she as art educator.  The show won the Citizens Award for Television for the Best Educational Program Series in 1967.

Abroad, she held one-woman exhibits at Villa Museé in Fragonard, France, and in the Philippine pavilion of the 1992 Work Exposition in Sevilla, Spain.  She was also part of a group exhibition in Beijing.

Among several dozen exhibits, her latest was a blockbusting 184 pieces in Ayala Museum a few months ago. During the month-long show, she and Nestor launched “Calypso; the Pig that Almost Became Lechon,” to wide acclaim.

The book is available in Ayala Museum.