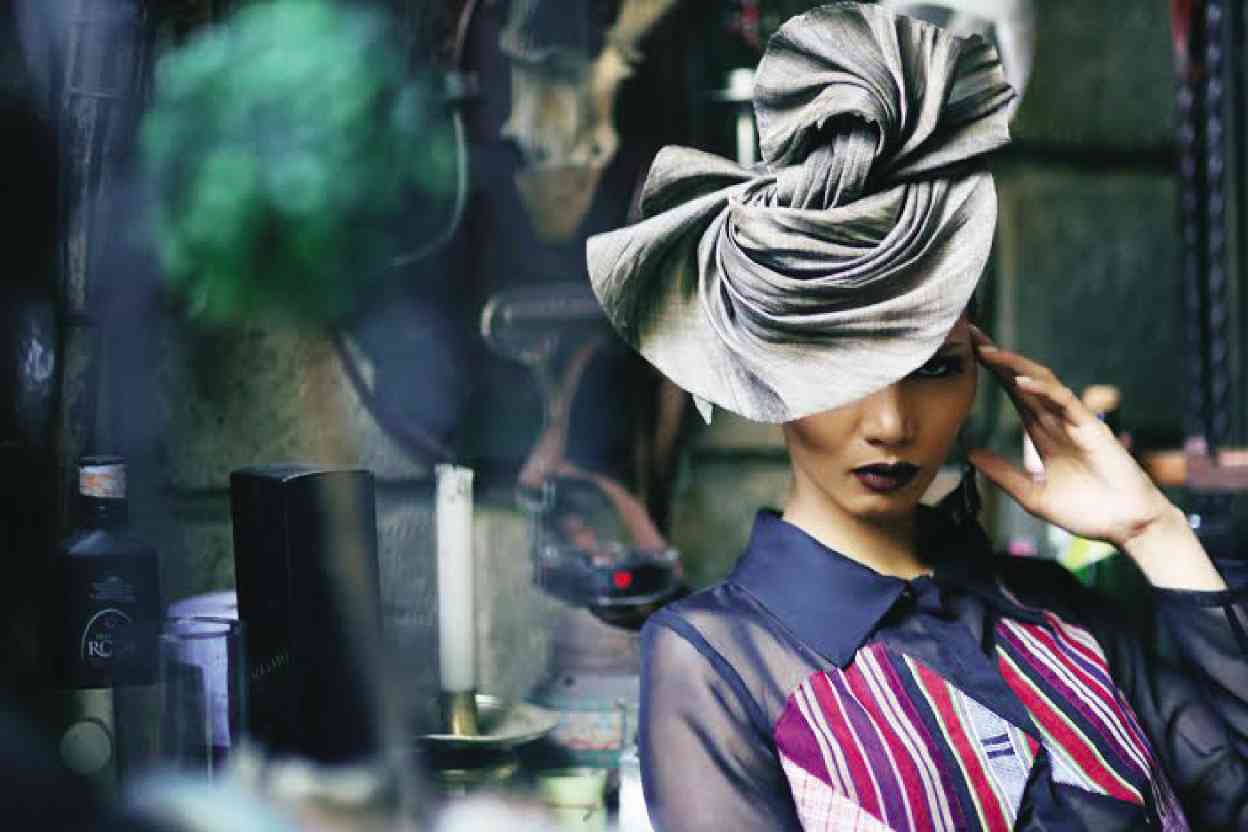 So you want Tessa Valdes’ fancy hats and fascinators

Ask any fashion insider if he/she knows of any Filipino milliners, and chances are, the answer you’ll get is, “Mich Dulce.”

And surely, the only name you’ll hear when you ask which Filipino wears hats and fascinators regularly is Tessa Valdes.

Even then, it was still surprising when I asked editor-friends from the fashion glossies if they knew of any Filipino milliners other than Mich Dulce, and they could only give me a blank stare. Their common reply: “Ask Tessa.”

In a way, these fashion folk are justified in their ignorance. However we may claim to have been globalized, elaborate hats and headdresses or fascinators are still not part of the typical Filipino woman’s look, thus the dearth of milliners.

Here, toppers are more of a novelty than de rigueur, unlike in, say, the United Kingdom or Australia. (Which should also explain why Dulce has chosen to base her business in London, where the famous milliners are.)

When I did finally “ask Tessa,” she could only give me three names, her main suppliers for hair accessories, and two of them are not strictly milliners: One is a maker of beauty pageant shoes who also makes tiaras and crowns, the other prefers to be described as a manufacturer than a hat designer.

“It’s a very small industry here. We’re just a handful, so we know each other,” says Richelle Olego Filart, whose family has been making hats and fascinators for the export market since 1986, under their company called Orient Meadow.

“And just to be clear, we’re manufacturers, not designers like Mich Dulce,” Filart adds.

Their company also sells milliner’s products, or materials used in making hats, and Dulce used to be a customer. Fashion designer Francis Libiran has also bought materials from them.

Valdes is their only celebrity and individual client.

Filart’s mother’s initial foray into hats started when a Japanese asked her to source buntal hats, made from the fine white fibers of a type of Philippine palm, which were expensive. Having seen its potential, the matriarch shifted her mango export business to handicraft: making hats and fascinators.

Soon, Orient Meadow was also exporting its wares to Australia, Europe, the US and the Middle East. It was at Manila FAME that Valdes found them.

Marilou Laurena entered the trade by accident. A few years ago, she and her husband, a furniture manufacturer, lived alone in a Makati village and became victims of a couple of break-ins. They decided to hire three household helpers to keep them company.

An empty nester, the retired Laurena didn’t have much to do. To fill her time and that of the help, she started making fascinators, without even any intention of selling them. She was self-taught.

Maybe it was her fond recollections of her youth being doted upon as the first daughter and first granddaughter in the family—“they kept putting things on my head”—that made her gravitate toward hats, says Laurena, who studied interior design.

When she was young, a writer aunt also always brought her along to travels abroad, where they attended the Ascot races.

A sister saw Laurena’s fascinators and encouraged her to sell them in bazaars. Her first customers were the Australian women in Manila, who typically dress up to watch the Melbourne Cup on television.

In 2006, Laurena registered her company called Hat Momma, and today supplies Valdes with most of her daily fascinators. She also makes pieces for fashion designer Rajo Laurel’s brides, and has her products sold at Firma.

Hat Momma’s customers are expats, balikbayan and tourists, who often arrive in busloads in her Parañaque showroom. (She also has a few pieces on display at Makati Garden Club on Ayala Avenue.) Then, there’s the occasional wedding and, funnily enough, theme events like “Tessa look-alike parties.”

“With Tessa alone, I have my hands full,” she says.

Valdes says Laurena typically sends her balikbayan boxes filled with fascinators for her to choose from. A box can contain up to 24 pieces. Often, they strike a deal and Valdes buys them all.

To top off her already colorful and flamboyant style, Valdes began incorporating fascinators in her wardrobe some 10 years ago, and has amassed about 14 bins filled with them, all color-coded. She only buys Filipino; ironically, she doesn’t own one by Dulce.

Her Philippine-made fascinators are such eye-catchers that on her travels, Valdes has traded them for other things.

“I wish Marilou sold them for export, because I travel with her fascinators and they’re so easy to pack. I can crush it and [it bounces back]. I don’t even have to put them in boxes,” Valdes says.

Filipino women are shy, says Laurena. Some might dare put on a chunky statement necklace or earrings, but very few would have the chutzpah to go about their day sporting a fascinator as natural as a rooster with its comb on its head.

Laurena says she noticed that fascinators started to become a novelty for younger Filipino women after Prince William wed Kate Middleton. Sometimes she gets orders of small fascinators as wedding giveaways. (Her fascinators are priced from P250 to P5,000.)

Hat Momma’s fascinators are made of sinamay, pinukpok (abaca), buntal and a variety of fabrics, and accessorized with feathers, shells, beads and whatnot.

Orient Meadow’s are stylized sinamay hats, buntal, polyhemp and abaca. They don’t usually use feathers and such.

“Our edge over other hat-makers abroad are our materials, which are all Filipino,” Filart says.

As for Valdes, she’s amused that she has become the poster girl of flashy headdresses, and that even people she has never met hold parties revolving around her personal style.

“It makes me think sometimes if I should just go into the hat business,” Valdes says with a chuckle.

“But then I will have more hats, huwag na lang (never mind)!”