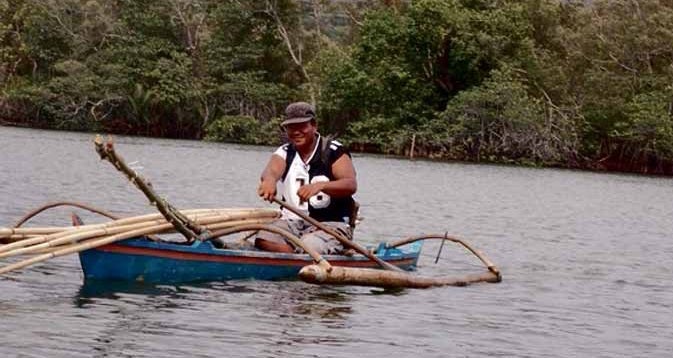 SERENITY INMOTION Just off themain road, Uacon Lake is scenic and clean. The 112-hectare lake in Zambales is a cool sight with its backdrop of lush greenery andmangrove forests.

But its stillness and quiet charm are enough to attract urban dwellers, and they come to enjoy the quietude in the beach resorts at Uacon Lake.

Uacon Lake is known as the cleanest inland body of water in Central Luzon. During summer, the lush greenery of the surrounding mountain and mangrove forest make the 112-hectare lake a cool sight even under scorching heat.

Carlos Concepcion, municipal tourism officer of Candelaria, said the lake was made an ecotourism area in the early 2000s because of its tourism potential.

“The raw beauty and serenity of Uacon Lake make it an instant tourist attraction in our town and in the entire province of Zambales,” Concepcion told the Inquirer.

Uacon’s beauty and the town’s efforts to keep it clean have earned for the lake the Gawad Pangulo sa Kapaligiran Award, Concepcion said.

“The villagers of Uacon maintain the cleanliness of the lake. They see to it that tourists do not dirty the water,” he said.

Except for a boardwalk near the barangay hall and some unfinished structures initially intended for an ecotrail and a birdwatching area, no development has been undertaken at the lake, he said.

“No major developments have been injected into this place and we like to keep its natural beauty because it’s the reason why people want to see the lake,” he said.

The lake’s cold, clear water comes from the mountains of Zambales. The lake empties into the West Philippine Sea through a 2-km-long river.

On the eastern side, an area called Pantalan Paradise offers visitors a closer view of a mangrove patch a vantage point for birdwatching.

Concepcion said a foreign group tried to develop Pantalan Paradise as a camping and birdwatching site but the plan fell through.

He said no structures were built in the area, but the local government had plans to revive the plan.

In 2011, a dragon boat festival, participated in by various clubs, including the Philippine Army champion team, was held in Uacon Lake, Español said.

She said the lake “enthralled” the Army kayakers, and they compared it to a lake in Malaysia where they often trained.

“The Army team members said they preferred to practice in Uacon Lake because of its pristine beauty and serenity,” she said.

Nature lovers and travelers to Northern Luzon can stop and enjoy a scenic view of the lake from the national highway.

“The lake is just a few steps from the main road. If motorists have time, they can stop for a while to check out the lake and enjoy the fresh air,” Español said.

Felicitas Apongol, Uacon village chief, said the lake could be developed into an all-year-round tourist destination in Zambales.

“There’s no denying that Uacon Lake is beautiful and very clean. We owe it to the people in our community who work to preserve its splendor,” Apongol said.

She said she was coordinating with the municipal and provincial governments for the development of the lake and its promotion, along with the beach resorts, as a tourist destination.

“Our plan is [to have] more boats on the lake and [offer tour cruises. Tourists] can go around the lake by boat and then eat in restaurants near the area,” Ebdane said.

Helen Grace Babs, president of the municipal tourism council, said the resort owners and the providers of other tourist services supported efforts to develop Uacon Lake.

Besides being a tourist destination, Uacon Lake is also a source of livelihood for fishermen in Candelaria.

To get there, visitors from Manila may take Victory Liner buses bound for Santa Cruz, the northernmost town in Zambales, and get off at Candelaria.

Candelaria is the last stop before Santa Cruz.