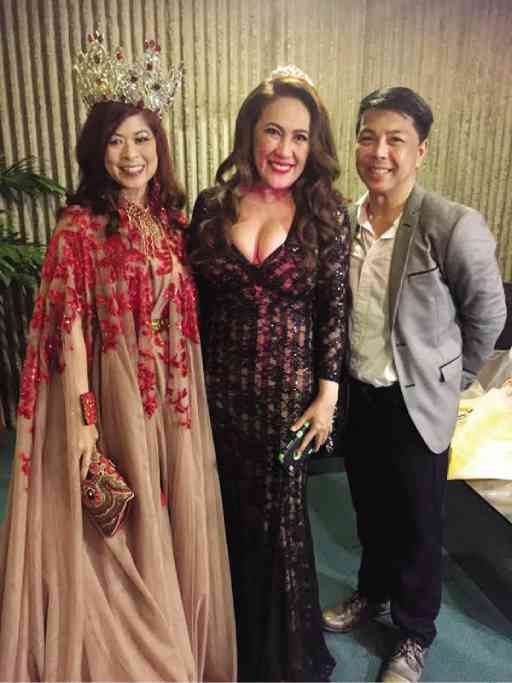 The beauty of Filipino women has captivated the world for many decades. Generations of Miss Philippines titleholders have constantly been in the Top 10 of international beauty pageants, even bringing home the crown a number of times.

Last week, I was on a beauty pageant roll as judge in two very different yet special contests.

The first was the inaugural Miss Gay Manila 2015. Some conservatives may consider the event controversial, but I found it courageous and relevant, as the 29 transgender candidates promoted gender equality that evening at the PICC Plenary Hall.

Kudos to the city of Manila which put up Miss Gay Manila. Manila Mayor Erap Estrada said the pageant would not only recognize the city’s gay community, it also raised funds for the various medical missions of Mare Foundation headed by former First Lady Dr. Loi Ejercito and daughter Jackie Ejercito-Lopez.

Co-organized by Viva Live, the extravagant production was impressive and truly a display of beauty and brains beyond sexual orientation. This celebration of gender equality was one of the grandest coronation nights I have attended. The costumes were spectacular and the evening gowns were beautiful.

Hosts Paolo Ballesteros and Divine Lee kept the energy high, especially in bringing out the intelligence of the candidates during the Q&A segment.

Anne Curtis brought the house down with a remarkable special guest performance.

Winning the crown and a half-million-peso prize was Trixie Maristela, who also won Best in Evening Gown.

First runner-up Marianne Arguelles and second runner-up Francine Garcia also won cash prizes. They likewise tied for the Best in Swimsuit award. The three will be the LGBT spokespersons for the city of Manila.

Reusing my own crown

The very next evening, I was a judge again, this time at the Slimmers World Miss Bikini Philippines 2015 held at the Newport Performing Arts Theater of Resorts World Manila.

The 32 candidates were the epitome of bikini sexiness, of course, but in the end, Maria Fatima “Tim” Alsowyed claimed the grand title. Her court included first runner-up Angelu Gonzales and second runner-up Nicole Dichoso.

Judging at Miss Manila and Slimmers World Miss Bikini Philippines had me wearing gowns by designer Cherry Veric. But I also had the same bejeweled crown made by Cebu designer Mark Tenchavez. Good crowns need to be reused, I’m sure the Queen of England would agree. I wore this crown first at my 20th wedding anniversary last year.

Thankfully I have enough Swatch watches and rarely need to wear them back to back. For the two beauty contests, I wore two hot numbers from the latest summer collection.

Several Swatch watches of this collection are being given away through an ongoing contest. There are still four days left to win a Swatch. Simply choose your favorite Swatch on display in the Swatch Mirror Tunnel at the Upper Ground Level of SM Mega Fashion Hall. Take a photo wearing the Swatch, upload on Instagram, and hashtag #DestinationSwatch and #SwatchPH. The photo becomes your entry for a chance to win your favorite Swatch, but be quick as the contest ends on June 4.

The Swatch Mirror Tunnel also promotes and serves as inspiration for the ongoing “Create and Innovate: Essence of Switzerland” Art Competition, in partnership with the Embassy of Switzerland in the Philippines.

It is also sponsored by Swiss Cultural Fund-Philippines and Etihad Airways.

Three grand prizes are at stake: a special Swatch Award of P100,000 and two trips to Switzerland for 5 days/4 nights inclusive of round-trip tickets, hotel accommodations and pocket money.

Artists age 18-30 should seriously consider joining this competition. Check it out at any Swatch shop or at www.swissculturalfundphils.org.

Swatch grand dame Virgie Ramos truly supports the arts and one of her favorite artists is National Artist Benedicto Cabrera. She was all out in support of the “Sabel, Love and Passion” musical, which had a successful run at The Theatre at Solaire Resort and Casino.

The musical is the highlight of a yearlong collaboration between Solaire and the BenCab Art Foundation. “Sabel…” will have another run at The Music Museum next month.

At the excellent production, I saw Freeway shop sisters Sheree Gotuaco and Katty Qua, who are mounting a fashion show for their latest collection, which coincidentally will also feature the art of BenCab.

Freeway x BenCab for National Artist Collectors’ Series 2015 will be held June 9 at the CCP lobby.

Freeway’s tribute to BenCab will have a pop-up show preview and fashion show. In celebration of BenCab’s 50th anniversary retrospective, the collection interprets his varied works spanning a 50-year career. It will be launched together with the opening of BenCab’s exhibit, “Pulp Multiples,” at the CCP Main Gallery Museum.

I’ll now skillfully use BenCab as a segue. For the opening of Twenty-Four Seven McKinley Building, I wore a BenCab-inspired outfit to check out the new hub of Focus Global, the exclusive Philippine distributor of the world’s finest brands in premium home furnishings.

The building is at the corners of 24th St. and 7th Ave. along McKinley Parkway in BGC. The spacious showroom consists of five floors dedicated to showcasing the latest trends and innovations for every room in the home.

Focus Global’s power couple Steven and Loli Sy welcomed their guests and special executives of their partner companies at the impressive launch.

The latest bath and wellness technologies are also showcased on the floor of German brand Dornbracht and Villeroy & Boch. On another floor, German kitchen brand SieMatic is matched with premium home appliances from Miele of Germany and Sub-Zero built-in refrigerators and Wolf cooking appliances from the US.