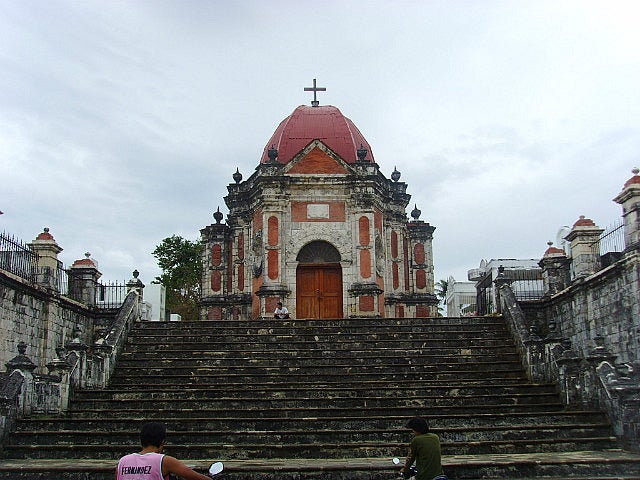 ANOTHER road-widening project of the Department of Public Works and Highways (DPWH) in Iloilo province threatens to affect the Spanish-era cemetery in San Joaquin town.

Built in the 1890s by Fr. Mariano Wamba, the cemetery features a Baroque-style gate, niches for santos on its walls, and a steep grand staircase leading to the mortuary chapel.

“It is perhaps second in monumentality to that of Janiuay (also in Iloilo) but this latter is rather rundown,” added Jose, archivist of University of Santo Tomas and former commissioner of National Commission for Culture and the Arts.

The threat the DPWH project poses to the cemetery has been raised by Iloilo resident and heritage advocate Cristhom Setubal.

“During my photographic spree, I was bothered upon seeing the DPWH road right-of-way marker encroaching about three meters from the front portion of the coral-block perimeter wall of our town’s architectural, cultural gem,” said Setubal.

“Should I be alarmed knowing that road-widening projects have been mushrooming along southern Iloilo towns?” he asked.

Setubal said he consulted the municipal engineer of San Joaquin, who promised to raise the issue with the DPWH engineer in charge.

Another heritage advocate, Renz Trance, argued that widening the roads was no guarantee of economic development.

“It (road-widening) has no direct relationship with development, qualitatively and quantitatively,” he explained.

Eric Zerrudo, a commissioner of the Philippine Unesco Commission and the director of the UST Graduate School Center for Conservation of Cultural Property and Environment in the Tropics, said the San Joaquin Campo Santo, along with other Spanish-era cemeteries in Iloilo province, was of high cultural significance to the country.

“Destruction of its authenticity, integrity, and setting will undermine its meaning and value,” he said.

“The San Joaquin community of local-government officials, church and local residents, plus the national cultural agencies, should move heaven and earth and appeal to DPWH to redesign that section of the road project,” Zerrudo added.

The bas relief of the Battle of Tetuan on the façade of the church was recently repainted by the National Historical Commission of the Philippines, getting mixed reactions from the public and the heritage sector.

Elsewhere in the country, DPWH road-widening schemes have been threatening heritage structures.

Last August, a portion of the 200-year-old Dampol Bridge in Dupax, Nueva Vizcaya, was damaged due to the widening project of DPWH.

Another road development project in Ajuy town in Iloilo threatened the heritage house owned by Zerrudo and the front portion of the land occupied by the Gabaldon-type school building.

Both heritage structures were saved after DPWH shelved its plan.

Same goes with heritage structures in Sariaya town in Quezon, which are threatened by another road-widening project. These structures are saved—for now.