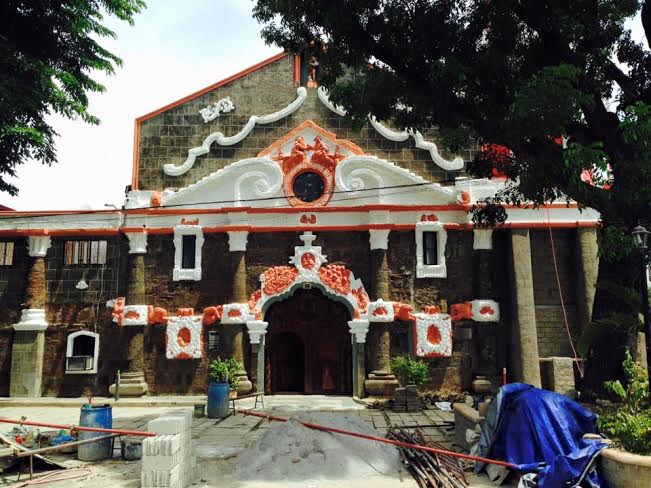 HERITAGE advocates condemn recent renovations on the façade and belfry of Saint John the Baptist Church in Calumpit, Bulacan, describing them as improper and disrespectful of the original design of the edifice.

Heritage advocates decry that the church façade has been painted orange and its belfry pink, making the structure look like a cake.

Moreover, iron braces were fitted into the belfry.

The church is supposed to be 400 years old and is the oldest in Bulacan, heritage advocates says.

The original church was built in 1579, the present church and convent were finished in 1779. Reconstructed in 1829, the belfry was burned during the Philippine Revolution in 1899.

The “total renovation” does not have approval of the Diocese of Malolos, says Jaime Corpuz, former president of the Bulacan Heritage Conservation Society.

The town’s parish priest, Fr. Proceso Espiritu, was reportedly the one who initiated the project.

The parish had originally applied with the Diocese of Malolos for a “retrofitting,” says Corpuz. The application was approved.

But instead of retrofitting, what happened was a “renovation.”

Corpuz laments that the renovation is “disrespectful” of the church since it now looks like a dollhouse or a cake.

Corpuz also reveals that the parish priest did not seek experts’ advice on how to properly execute the renovation. “We strongly condemn the act that they did not consult proper authorities [and experts],” he says.

Osie Bautista, Bulacan heritage advocate, says that while she sees nothing wrong with the paint because it is for the protection of the structure, she frowns on the colors used.

She says the metal bracing of the belfry should have been hidden.

Bautista says the structure is “bastardized,” lamenting that the project does not seem to have consulted restoration architects and experts.

She says the project merely consulted a structural engineer, who did “not care about heritage, historical value of the structure.”

National Commission for Culture and the Arts (NCCA) Chair Felipe de Leon Jr. describes the renovation as a “monstrosity.” “Who is the monster who did this?” he asks.

De Leon also says the renovation has resulted in an incongruity in a church that he describes as “a repository of history and memories of the people who have been using it” for centuries.

He stresses that the renovation has no respect for ancestry and violates all rules on the conservation of heritage.

Postscript: Because of the widespread public outcry, the Diocese of Malolos met with Father Espiritu on May 28 and directed him to attend lectures on proper conservation procedures.