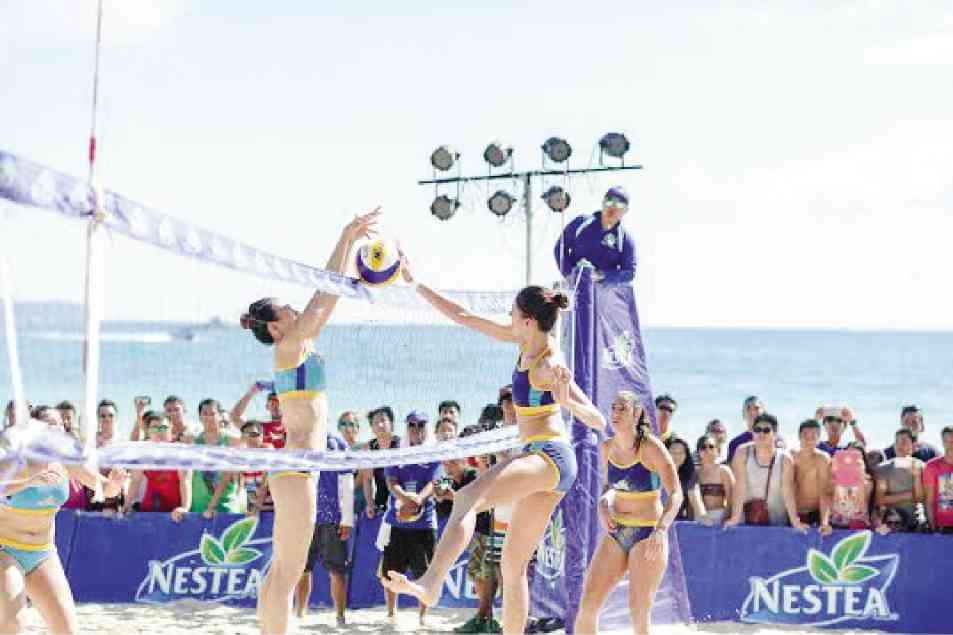 It’s the season for beach volleyball in Boracay

With the blazing sun beating down on the spectators, one really felt the heat of the game. Ho, Gumabao, Daquis and Cruz won and now hold the title of the first Nestea Beach Fantasy Beach Volleyball Match Champions.

Now on its 18th year, the event saw players from different universities battling it out on April 30 to May 2 in front of Boracay Beach Chalets at Station 2.

“My Nestea Beach was amazing! said Leanne Jacinto, consumer marketing manager for Nestea. “We would like to thank everyone for joining this year’s Nestea Beach. From the refresh lounges, beach parties, intercollegiate beach volleyball competition to the long-running ‘Love the Beach’ advocacy, Nestea is proud to deliver its commitment to giving the youth a refreshing and memorable summer, just the way they wanted it.”

Nestea Beach activities dominated this year’s summer season. Nestea Refresh Lounges were a big hit among the youth as they relaxed and enjoyed the free light and refreshing drinks, mobile charging stations, paraw sailing and massages.

Nestea Beach ended the weekend on a high note by organizing back-to-back parties co-hosted with Valkyrie at Epic Bar in Station 2, and featuring two of the biggest names in the international music scene. Mixes from DJ Sander Van Doorn and Knife Party made the LaBoracay-partygoers rock until dawn on May 2 and May 3.

Beach lovers had the chance to care for Boracay Island through My Nestea Beach’s “Love the Beach” activity. Interested participants signed up and joined the shore clean-up on May 2.

A total of 235 participants signed up for the early morning activity, collecting 103 kilos of trash underwater with the help of the Boracay Association of Scuba Diving Schools (BASS), and 200 kilos of coastal trash from the beaches of Boracay.

“Nestea Beach is happy to have provided the youth with a refreshing and memorable LaBoracay with their friends, and we are looking forward to seeing them again next year,” Jacinto added.