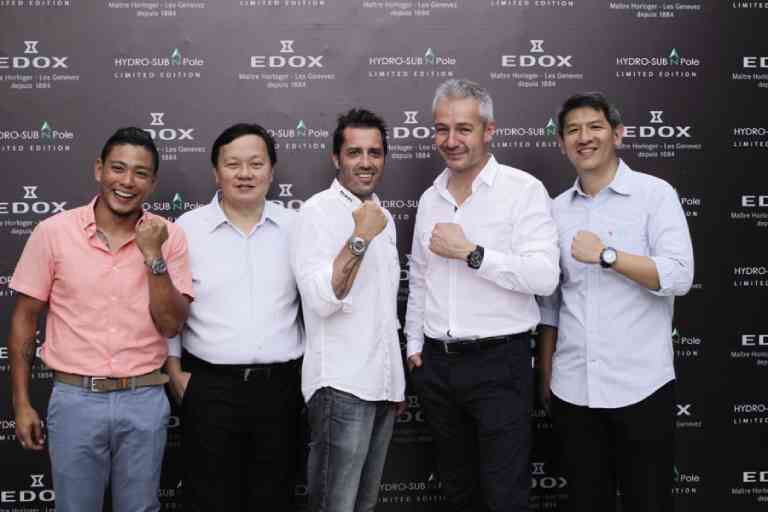 A limited-edition version is launched for the 50th anniversary of the classic Edox Hydro-Sub watch, with freediver Christian Redl as endorser

A few days ago, Christian Hotz, board member of the luxury Swiss watchmaker Edox, received a text message from a retailer in Beverly Hills, California. Hollywood actor Bruce Willis, the message read, just bought the 50th-anniversary limited-edition relaunch of the 1965 classic, the Edox Hydro-Sub.

Only 515 pieces were distributed worldwide for the limited edition box set, which includes a toolkit for wearers to switch from the stainless-steel bracelet to the hypo-allergenic rubber strap. The timepiece is individually numbered, with engraved caseback showing the view of the earth from the North Pole, and comes with an inscription marking the 50th anniversary.

The watch itself is a masterpiece, a flawless synthesis of design and technical achievement only a watchmaker with nearly 132 years of heritage can boast of. Edox, to this day, sticks to its romantic, old-fashioned sensibilities. That means its watches are still designed, from beginning to end, by a human being.

“Computer designs are too perfect. The lines are too good, and there are too many facets… The watch itself is not calm; it’s too busy. It lacks timeless style and elegance. So we avoid that,” Hotz said, who also leads the international sales and marketing team for Edox.

Edox was founded on love—so to speak. Its founder, the Swiss Christian Ruefli-Flury, was a romantic who worked as watchmaker in Biel/Bienne until 1883. To celebrate his wife Pauleen’s 25th birthday, he fashioned for her a pocket watch so exquisite that she thought: Why not create our own brand?

Ruefli-Flury listened; in 1884 he founded Edox, a name derived from the Greek word meaning “measuring of time.”

When it launched the Delfin timepiece in 1961, touted the water champion of the time, its double O-ring system was so coveted that when the patent expired 20 years later, many well-made Swiss watch brands copied the technology.

“You see, a watch brand without a heritage is like a human being without a soul. That’s why everybody wants a relaunch of iconic vintages of the past,” said Hotz, whose father before him also worked for the company’s marketing arm.

The Edox Hydro-Sub is the first crown system timepiece that was water-resistant at 500 meters, a remarkable technical feat in the ’60s.

Last month, Redl made history when he became the first freediver to dive under the Arctic ice of the Geographic North Pole. He also holds the record for the longest dive under the ice at almost 100 meters (his North Pole dive was recorded at an incredible 30 meters). But diving in frozen lakes is no match for the harsh, dangerous environment of the North Pole.

Redl has always loved the water, he said. His Christmas present at age 6, from his uncle, was a set of snorkel, mask and fins. At 10 he was scuba-diving in the family pool. But it was not until he was 17, when he saw Luc Besson’s epic movie about free-diving, “The Big Blue,” that he aspired to become a professional freediver.

Now 38 and a professional freediver for nine years, Redl took on the North Pole and made history. For the dive, his team trekked across the Arctic ice, with two Siberian huskies leading the way. Huskies are reputed to detect thin ice on the frozen water, hence making the perfect companion. When they found the spot, his team dug through 1.8 m of ice before hitting seawater.

“In the North Pole, everything is like black and white. You have ice above, and 2,000 feet of water under you. The landscape looks the same wherever you might be facing. And you can’t take photos of sunsets because there is none. The sun is up 24 hours, circling around you as the day goes by,” Redl said.

For the Philippine launch of Edox Hydro-Sub, Redl flew in from the North Pole down to Asia just a few weeks after he made his dive. “So that’s from an environment of -40 degrees to +40 degrees here. But do I like cold? No. I hate it,” he said, laughing.

He said he was underwater for one minute, diving within the safe zone of 1 meter/second and covering a total of 30 meters. Under less extreme conditions, Redl could hold his breath for up to seven minutes. That’s because, he said, you lose at least 50 percent of your lung capacity when you dive in subzero temperature.

Redl remembered diving towards the pitch-black darkness of the seabed. He couldn’t see anything, not even his hands, he said, except for the small light emitted by his Edox Hydro-Sub. But when he hit 30 meters and prepared for his swim back to the surface, he looked up for the first time. The sight took his breath away.

“I have never seen anything like that. It was so bright, as far as the eyes can see, and everything was covered in this green-blue hue. You can see the ice, the mountains. You feel like you can see everything, and everything is beautiful,” he said.

Going down to the depths of the sea is just 50 percent of the dive. Many divers make the mistake of preparing for a dive, but neglect to figure in the swim back up to safety.

“That’s why people die. Even mountaineers die on the way down because everyone is focused on the climb up,” he said. “Freedivers have to know how important the complete dive is.”

The Edox Hydro-Sub, he said, performed as expected with no glitches.

The relaunched model, said Hotz, looks exactly like the original, but is fitted with the state-of-the-art MasterLock, a mechanism on the bezel that one can slide across to protect the crown while diving.

“We wanted to add something that reflects the watch-making technology of 2015. So this is a fusion of the past and the present,” Hotz said.