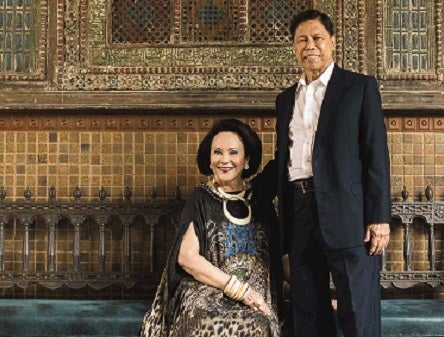 Louie to renew vows with Mellie in Amelia

In the mid-1960s, the couple had been two years married when they decided to put up their own pawnshop after Mellie learned the ropes from her mother-in-law.

The duo is the force behind the ubiquitous Ablaza Pawnshop that has 100 branches all over Metro Manila.

But it’s not really surprising if their coming matrimonial milestone is enjoying social buzz. They are, after all, a very visible couple especially in diplomatic circles. Louie is Zambia’s honorary consul to the Philippines; Mellie is honorary consul of Guatemala.

“There are almost 60 foreign embassies, and we are both invited to all their national days. Of course we attend all events together since we are both consuls,” Louie tells Inquirer Lifestyle.

Society circles say Louie is a rare husband in that he truly enjoys escorting his wife to socials.

And they’re a rarer couple still in that they can do the social circuit in such an amiable, down-home manner—no airs, not stuffy at all.

“That’s why they are genuinely well-liked,” says a high society insider who’s used to the artifice that marks that stratum. “Magaan dalhin (easy to be with).”

Don’t they ever get tired of being with each other all the time?

“If we had gotten tired, there wouldn’t be preparations for a 50th, would there?” Mellie asks, laughing.

Then she says something that has become very obvious: “We know how to laugh.”

The smiles belie the drama they endured before tying the knot in 1965.

Mellie was then still reviewing for the bar after having graduated from the University of the Philippines (UP) College of Law with the likes of Haydee Yorac, Felipe Gozon, Reynato Puno, Minita Chico (-Nazario) and Bellaflor Angara (-Castillo).

Mellie recalled meeting Louie at an event dubbed Duke’s Club Ball. Louie was a student leader at the University of Santo Tomas (UST) and headed the Central Board of Students.

After taking up banking and finance as his undergraduate course, Louie was working on a master in management degree.

Mellie’s parents were in Dagupan with the rest of her siblings, while Mellie lived with a childless aunt and uncle in a rented house on Josefina Street in Sampaloc, Manila. She was the type who’d always head straight home after review classes.

“She wasn’t a party girl or an extrovert like me,” Louie notes.

The fact that she lived with relatives, not in a dormitory, didn’t dissuade this suitor.

Shortly after they were introduced, Louie began paying Mellie a visit—under the hawk-eyed scrutiny of her aunt and uncle.

Mellie had other admirers but none as serious as Louie. She had already taken the bar and was awaiting the result when her elders confronted her about the constant visitor.

When she admitted to “liking” Louie, the aunt wasted no time in reporting the matter to her mother in Dagupan.

The elders thought that the distance between Manila and Pangasinan would dissuade Louie. “I was banished. But Louie kept coming every weekend,” Mellie says.

Her mother would not even serve him merienda during those visits to discourage future trips.

Why the vehement opposition? Mellie explains that her uncle, a lawyer, used to be mayor of Manaoag town and, during those days, it was trendy to “inherit” the job of either one’s parents or well-regarded relatives.

While Mellie’s father was a doctor, the folk in Pangasinan were grooming her to take over her uncle’s political career, hence her law course.

The legal profession would have been Mellie’s springboard to public service, but the closest she came to a political stint was to serve as election registrar at the Commission on Elections in Intramuros, Manila.

And by then, she was already happily married to Louie.

Mellie says she was heavy with their middle child Jun Jun when Louie felt they needed to reassess their career paths. At that time, Louie was helping out his father in their construction business.

Besides, the husband was getting tired of driving Mellie to Intramuros every morning and picking her up every afternoon to go home to D. Tuazon Street in Quezon City.

Around that time, Louie’s mother Rosario owned a pawnshop in Caloocan. When her sister-in-law was unavailable, Mellie would be invited to join her mother-in-law.

Pretty soon, Mellie became familiar with the pawnshop operations, and the elder Ablaza urged the son and his wife to put up their own shop.

Louie remembers the first Ablaza Pawnshop branch in Sampaloc, along the old and flood-prone Trabajo Street (now M. de la Fuente), a stone’s throw away from his college haunt at UST.

Louie still smiles at the memory of his young wife propping her feet on a stool as floodwater engulfed their workplace.

One time, she was nearly swallowed by an open manhole as she waded in the flood. She was walking to a waiting car sent by her father-in-law that was parked near the Welcome Rotonda, about a kilometer away.

While Mellie honed her skills in jewelry appraisal, Louie took it upon himself to expand the business, scouting for locations.
He said it was after the 1986 Edsa uprising when they became very aggressive and covered more ground in Metro Manila.

“At that time, we competed with other pawnshops,” Louie says. “Today, our competitors are those engaged in money remittance. People would now ask relatives or friends from other places to send them money, instead of pawning jewelry in cases of emergency.”

Overseas Filipino workers used to bring home pieces of jewelry so that those at home could pawn them in case they failed to send home cash.

“But since they can send directly to a remittance center, there are also less visits by OFW relatives to the pawnshop now,” he points out.

Credit cards are another competitor, he adds, because people would take loans to purchase items or pay for necessities instead of pawning jewelry to raise cash.

“It’s difficult to put up branches now because of the competition,” Louie says.

“Besides, the rent is very expensive,” Mellie says.

“There is no intent to close. At least, we have children who can take over,” Louie says. As it is, Jun Jun and younger sister Czarina have already studied gemology in New York and possess finely honed appraisal skills.

Firstborn Mark is preparing to open his own M. Ablaza Pawnshop, aside from managing the family-owned Contemporary Hotel along Araneta Avenue in Manila’s Sta. Mesa district.

Louie and Mellie are busy supervising preparations for their wedding anniversary party in the family’s eight-hectare estate called “Amelia” in Cavite.

Nearly 500 guests—relatives, friends, business buddies and those from the diplomatic community—have been invited, Mellie says.

After the Eucharistic celebration in the afternoon of June 6, there will be cocktails and a sit-down dinner. Then, in a vast pavilion, there will be music and dancing.

The couple would dance the French quadrille with friends, including some diplomats. People in social circles can sense their excitement as these plans, drawn up with the three Ablaza children, are revealed.

“It’s different when husband and wife do something together. Kapag magkaiba kayo ng ginagawa, you don’t talk to each other that often. Unlike us, we have common interests. Siguro ’yan ang isa talagang reason for those 50 years,” Louie says wistfully.

She recalls their silver anniversary celebration. Louie stood up at one point and invited everyone around to their golden celebration.

Mellie thought it was audacious. But here they are.

“Maraming ’di nakakaabot (sa golden anniversary). And he still looks young, huh? Thanks to me. Biruan lang kami nang biruan. And we are happy with our children,” Mellie says.

Mellie says she has always admired Louie’s patience, support, tenacity to be a good provider, and the fact that he loves her parents.

Mellie’s mother, Zosima Romero, recently celebrated her 95th birthday. “Whenever my mother had a significant birthday coming up, like 85th or 90th, Louie would always promise to hold a big party for her. My mother looked forward to those,” she says.

The wife adds that Louie has always been “loving and respectful of my parents. Even my (uncle and aunt), accepted naman siya. And Louie also loves his own family, pinapakita niyang mahal niya.”

Louie says the secret to loving Mellie is simple: “Ang lalaki usually makes a lot of promises, but we did not make promises to each other. Mahilig ako sa surprises.”

At this point, the couple is now more relaxed about the pawnshop business. There are frequent travels, about which Louie mockingly complains that Mellie turns him into her personal valet.

Mellie says a recent trip to Antarctica was made memorable by the fact that they had to watch “March of the Penguins” first, just so they would not be clueless about the continent’s natives, before embarking on the journey.

Next on their agenda is a trip to the Arctic Circle. No, not to see Santa.

“Para we can say we are on top of the world,” Louie exclaims. And they both laugh.