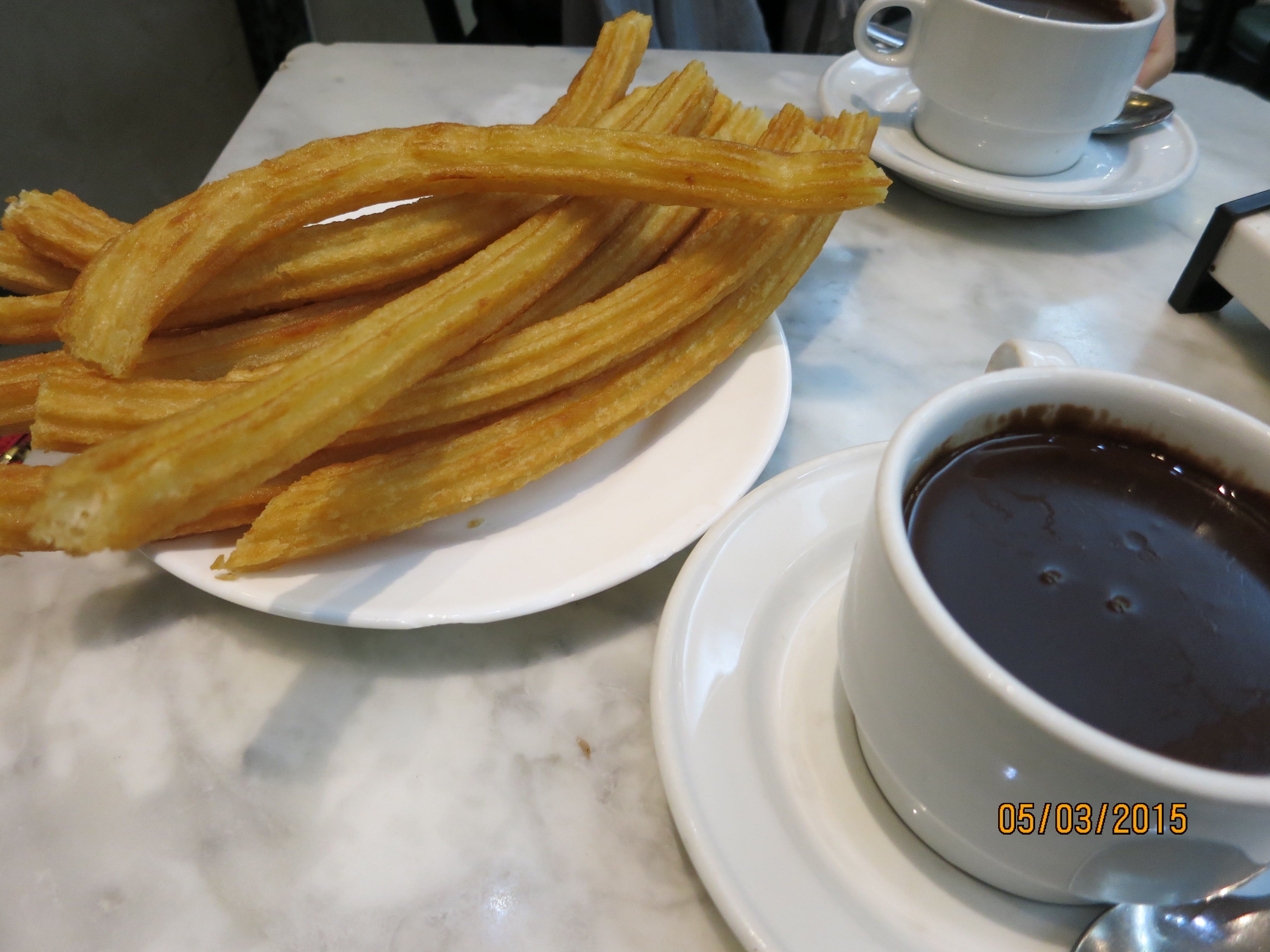 The magic formula for churros

A restaurant that has been serving the same food every day for over a hundred years must really be doing something right.

That’s 121 years of churros and hot chocolate, through war and peace, rain or shine, thick and thin.

Then as now, people come at all hours of the day and night to order this traditional snack. And no wonder. The light, airy golden brown strips of churros crackle with every bite and maintain their crispness no matter how often they’re dunked into the cup of hot chocolate that accompanies them.

As for the hot chocolate, San Ginés serves it amazingly thick, certainly dense enough to cling to the tips of the dunked churros, yet also fluid enough to be sipped occasionally.

It also has just the right blend of sweetness and creaminess. Apparently the kitchen has divined the magic formula that makes its churros and hot chocolate irresistible.

Just as I was wondering how on earth I could recreate this ambrosial experience back home, my daughter Clarissa noticed a phalanx of boxes on their wall.

Each 200-gram box contained a mixture for making one’s own hot chocolate at home. A box would be enough to make four servings of hot chocolate. I quickly bought half a dozen boxes.

Back in Manila, I lost no time in preparing the hot chocolate. The instruction said to boil a liter (four cups) of milk, then to stir in the mixture. Luckily I decided to make half of the recipe first, using two cups of milk and half of the mixture.

The hot chocolate came out really dense, so dense it was almost like a chocolate bar. I had to add about a half cup of milk to thin it a little.

A few days later, when I cooked the remaining mixture, I knew enough to use a little more than the recommended amount of milk.

My dining room certainly didn’t have the ambience of San Ginés, with its marble-top tables, its copper samovar, its mirrored walls.

I guess there’s nothing like having this traditional treat amid the Old World charm of San Ginés in the heart of Madrid.

Combine the water and salt in a saucepan and bring to a brisk boil.

Meanwhile, sift the flour into a heat-proof bowl. If desired, add the baking powder.

As soon as the water boils, pour it immediately into the flour. Stir flour and water together just until no flour is visible. The batter should still be a bit lumpy.

Spoon the batter into a piping bag fitted with a star tip. Pipe the batter into about six-inch lengths on a baking sheet covered with nonstick baking paper. If you’re using a large star tip, this recipe can yield around 10 pieces. If using a thinner star tip, the yield will be around 20 pieces.

Heat the cooking oil in a frying pan or large wok. When the oil is hot enough, use about two heat-proof spatulas to carefully lift the shaped batter and transfer them into the hot oil, about five at a time. Do not overcrowd the pan. Let the churros cook in the hot oil until evenly light golden brown in color. Transfer to a plate lined with absorbent paper.

Repeat with the remaining churros.

Sprinkle with sugar before serving. Or serve with hot chocolate.

It’s preferable to use corn oil for this recipe because it helps make the churros crisp.

Do not overcook the churros so they don’t become brittle. Cook them just until they turn a light golden brown.

Brush the spatulas with oil before using them for transferring the shaped batter into the hot oil so the batter doesn’t stick.
You can shape the batter into longer lengths. However longer churros may be more difficult to cook in the pan. A six-inch length churro is more manageable.