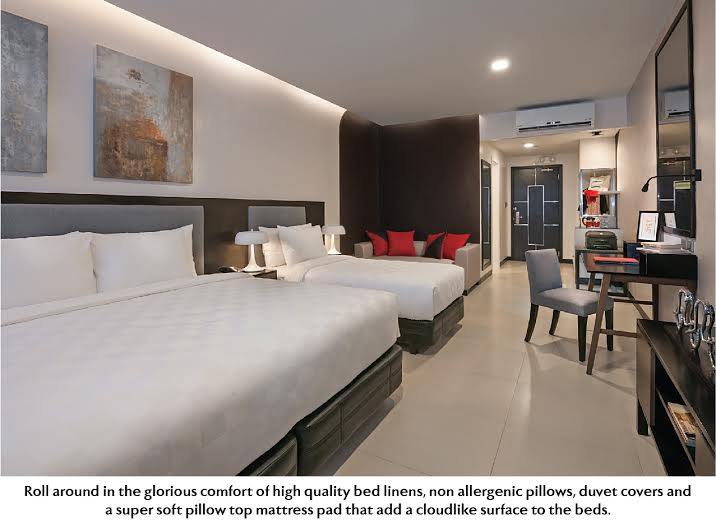 Some of the special amenities in each room of the hotel.

THE soaring temperature these past few weeks is enough to drive people out of their homes during the hottest part of the day.

But instead of getting caught in hellish traffic going out of town, the idea of a staycation in a city hotel with cool attractions is something worth considering.

The Summit Hotel Magnolia at the corner of Aurora Boulevard and Hemady Street in Quezon City is a good option.

The boutique hotel, which opened less than a year ago, has 82 rooms including four themed suites (two of each) complete with anterooms outfitted with a large-screen TV.

The Magical Suite has Moorish touches like curved arches and filigree lamps; the Fabulous Suite follows an Old Hollywood theme with a mural including Audrey Hepburn in pearls; Divine offers a Zen-like space for guests to zone out; and Nostalgic pays homage to the old Magnolia Ice Cream House with one wall listing fave frozen delights like Pinipig Crunch and Choo-Choo Train.

We stayed at the Nostalgic Suite and enjoyed design touches like the tiered shelf lined with vintage Magnolia milk glass bottles, framed photos of a “dirty ice cream” cart, and the yellowing map of New Manila where the Magnolia Ice Cream House used to stand.

The bed, a Super King made by placing two twin-sized beds side by side, is 84 inches wide and outfitted with soft white sheets, a matching comforter and four pillows.

With snacks and the remote control for the second flat-screen TV, one might never want to get up.

But right beside the hotel is the Robinsons Magnolia mall which offers a variety of restaurants and cuisines like Italian fare from Lombardi, Japanese at Ramen Nagi, and Pinoy breakfast at Conti’s.

If you’re lucky enough to book the Nostalgic Suite, complete the reminiscing by visiting the Magnolia Flavor House adjacent to the mall. The full-service restaurant offers a combination of savory meals and cold desserts. Go old school with a Banana Split, Black and White, or the Daredevil with “horns” made of two upturned sugar cones.

Third of its kind

One can also catch the latest Hollywood blockbuster or Pinoy tearjerker at the cinema or call the hotel’s front desk to book an in-room massage by one of the therapists from Lunula Nail Salon and Day Spa.

The hotel with direct access to Robinsons Magnolia is only the third of its kind—the two other Summit hotels are in Cebu and Tagaytay. Hotel manager Pops A. del Rosario described the properties as “a collection of hotels offering varied experiences” to business and leisure travelers. “We want Summit hotels to be known as fun hotels—unlike staid and somber hotel chains.”