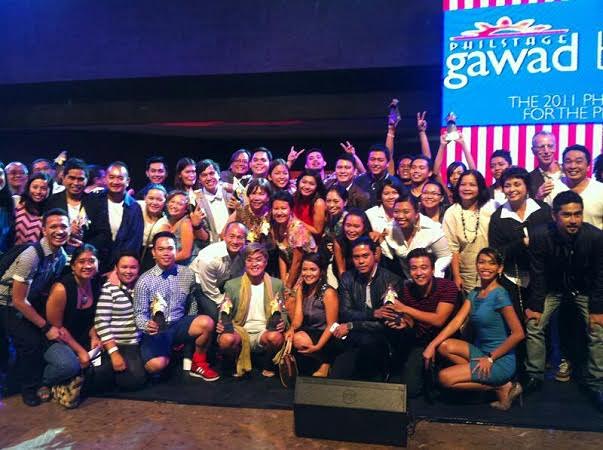 Cast, crew, producers and well-wishers of the Peta production “William” celebrate their win for Outstanding Original Play at the 2011 Gawad Buhay! held at the CCP Main Theater lobby. This year’s Gawad Buhay!, the Philstage Awards for the Performing Arts, happens on June 11, 8 p.m., at the CCP Little Theater. INQUIRER.NET CONTRIBUTED PHOTO

Philstage’s Gawad Buhay! gears up for its big night

The 7th Gawad Buhay Awards Night is going to be a glamorous event filled with most of the stage stars that moved you with heartrending performances or made you fall off your seat with laughter in 2014. Along with awards and speeches in 40 categories are dances, and perhaps even scenes from beloved plays, musicals and ballets.

Hosting the event will be Topper Fabregas, a man who can sing and dance as Neil Patrick Harris or Hugh Jackman did at the Oscars, and make fun of his fellow stars while making the audience laugh out loud.

Audie Gemora, current president of Philstage, and Santi Santamaria, board member, promise all these and more, in celebration of the best performances and productions of Philstage member-companies in the last year.

The Gawad Buhay!, its annual awards for the performing arts, happens on June 11, 8 p.m., at the Cultural Center of the Philippines’ (CCP) Little Theater. Though many of the attendees of this star-studded event are invited, the awards night is open to the public. Tickets are available for P500 at TicketWorld.

“In the last three or four years, we have ventured to try to make Gawad more accessible, more fun, more community,” says Gemora. “It has taken on a kind of informal, laugh-at-yourself vibe. If there’s intrigue or misunderstanding among us, we make fun of it, laugh it off at the awards night.”

He recalls: “Prior to this, it used to be a very stiff affair; everyone was in barong and you would read in very deep Tagalog, and nobody actually came except when you were nominated. So I said, ‘I think we can afford to be fun and laugh at each other.’ So that has been the tone.”

It started, he says, the year filmmaker Rafa Santos created a huge ruckus with his jokey comment that he preferred casting theater people in his films because they were easy to work with, and could be fed Skyflakes and cat food. The theater community was up in arms, but “what we did at the awards, I invited Rafa and then he presented with Kalila Aguilos, who is the president of the Theater Actors Guild. And when they came out everybody screamed. It was at the lobby of the CCP, we just put up bleachers and we also made fun of the fact that ‘The Phantom of the Opera’ was playing at the CCP Main Theater and therefore the rest of us companies had to be booted out. It became a really fun thing.”

This year, the Philstage board has chosen Dulaang Sibol founder Onofre Pagsanghan and Filipino puppet theater pioneer Amelia Lapeña-Bonifacio as its honorees.

“Dulaang Sibol is a trailblazing high school theater company that has produced original Filipino plays and produced many writers, directors and actors such as Tony Perez and Paul Dumol; and Amelia Bonifacio started Teatrong Mulat, the first children’s puppet theater company of its kind in the country,” explains Gemora.

The fact that the Gawad Buhay! nominations and awards have been limited to members of Philstage has raised questions.

But Gemora clarifies that, more than the fact that the Tony Awards, too, has a limited membership among the Broadway theaters found within a certain patch of real estate in New York, Philstage as an organization of professional theater companies has a different dynamic than, say, Dulaang UP or Tanghalang Ateneo. The two leading school-based theater companies operate on curriculum-based season programming, and a mandated mix of professional and student talents in their productions, which is different from the setup of local professional performing arts companies.

“Philstage’s goal is to foster and help create a theater industry of professional theater companies and dance companies,” says Gemora. To be a Philstage member, a company cannot be a fly-by-night endeavor and must have at least three years under its belt. Membership in Philstage is itself a recognition of resilience and commitment, he adds.

As for the awards, the selection of nominees and winners is made by an independent jury of artists, scholars, critics and enthusiasts, all of whom are obliged to watch the performances; jury members who fail to watch the shows are not allowed to vote. Nominees for the yearly awards are taken from the quarterly citations given by the jury.

“We have nothing to do with the jury’s deliberations and choices. They are self-governing; Philstage does not pay them, and it’s voluntary work for them. They discuss among themselves who are qualified, and none of us knows, until their names are called during the awards, who the winners are,” says Gemora.

There’s never been a better time to celebrate Philippine theater, as it is in the midst of nothing less than a renaissance. Never before have there been so many productions and performances in such a great variety of genres and forms, and also so much camaraderie, collaboration and cross-pollination among once bitter rival theater companies.

It is an industry electrified both by the energy of a new generation of talents and the well-honed artistry of its veterans.

Other productions that garnered nods for their cast and creative teams include AAI’s “Venus in Fur” and “Full Gallop”; Rep’s “Noises Off,” “Wait Until Dark” and “Scrooge”; 9WT’s “The Last 5 Years” and “Grease”; TP’s “Kleptomaniacs” and “Mga Ama, Mga Anak”; Full House Theater Company’s “Priscilla, Queen of the Desert”; BP’s “The Blue Moon Series”; and BM’s “Heart2Heart: Ballet & Ballads” and “Nutcracker.”

Simply put, if any of these performances proved to be an unforgettable night at the theater for the acting, dancing, singing, songwriting involved; or the story, the words, the lighting, the stage or the costumes that went into their making—if any of these theater shows or people struck a chord within you, then this awards night is for you as well.

It’s time to celebrate the excellence of the Filipino live (“buhay!,” get it?) performance.